So here we go with the start of a year in The Flower House Studio garden! 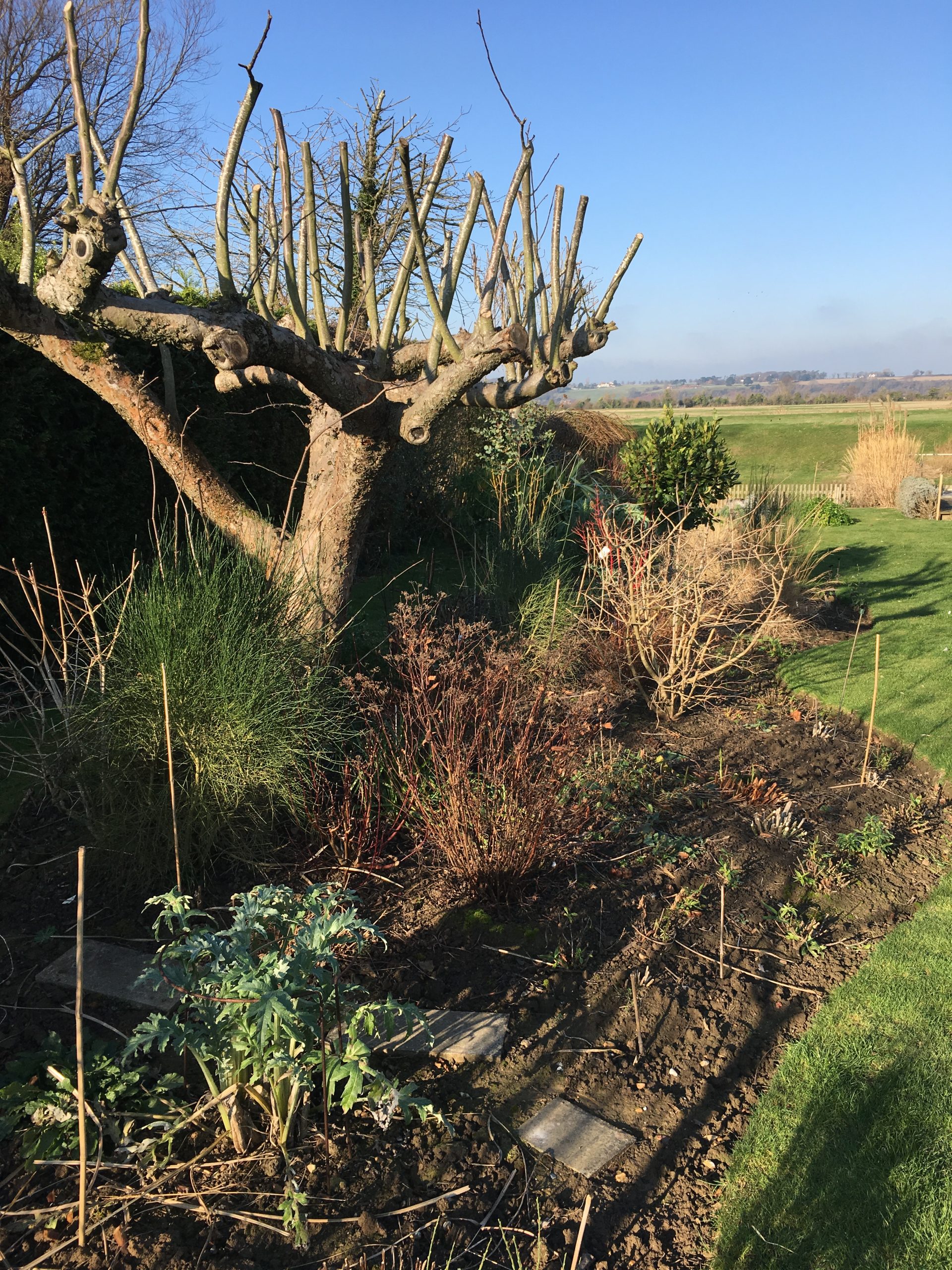 As you can see there are plants in the garden in January which give colour through leaf or stem but it is quite bare. What you do and when in the garden has a lot to do with where you live. In general it is colder the more north you are and wetter the further west. We are right on the south coast so are pretty dry and generally do not get that many frosts or severe winters but we do get quite a lot of wind.

As I was rather late starting this blog, I am consolidating the first 3 months. January and February are not as busy months as others in the year particularly if the weather is wet and/or cold. The light levels are also very low and daylight is key for growing.

However, January is a good month to have a tidy up, checking for any wind damage and to start getting things ready for what is to come. Sheds, greenhouse and the garden generally benefit from this. Pruning can also be done but you have to know which plants benefit from a winter prune. Any spring flowering shrubs should wait until after flowering so forsythia, bridal spirea, philadelphus and the like. But summer flowering clematis, buddleia, roses, spirea and cornus can be cut back hard, Wisteria is a bit of an exception as it like a prune in January and July.

Apple and pear trees can also be done now but my husband prefers to do this in the summer as winter pruning encourages vigorous growth. However if you have old branches or ones which cross and rub, get rid of those now then shape and thin to allow the light in later. These are very basic pruning rules, so it is best to check for your particular plants.

I have been known to start weeding in January as long as the soil is not too heavy and you can have some colour in the garden from mahonia, skimmia, hellebores and you might start to see the snowdrops poking through. 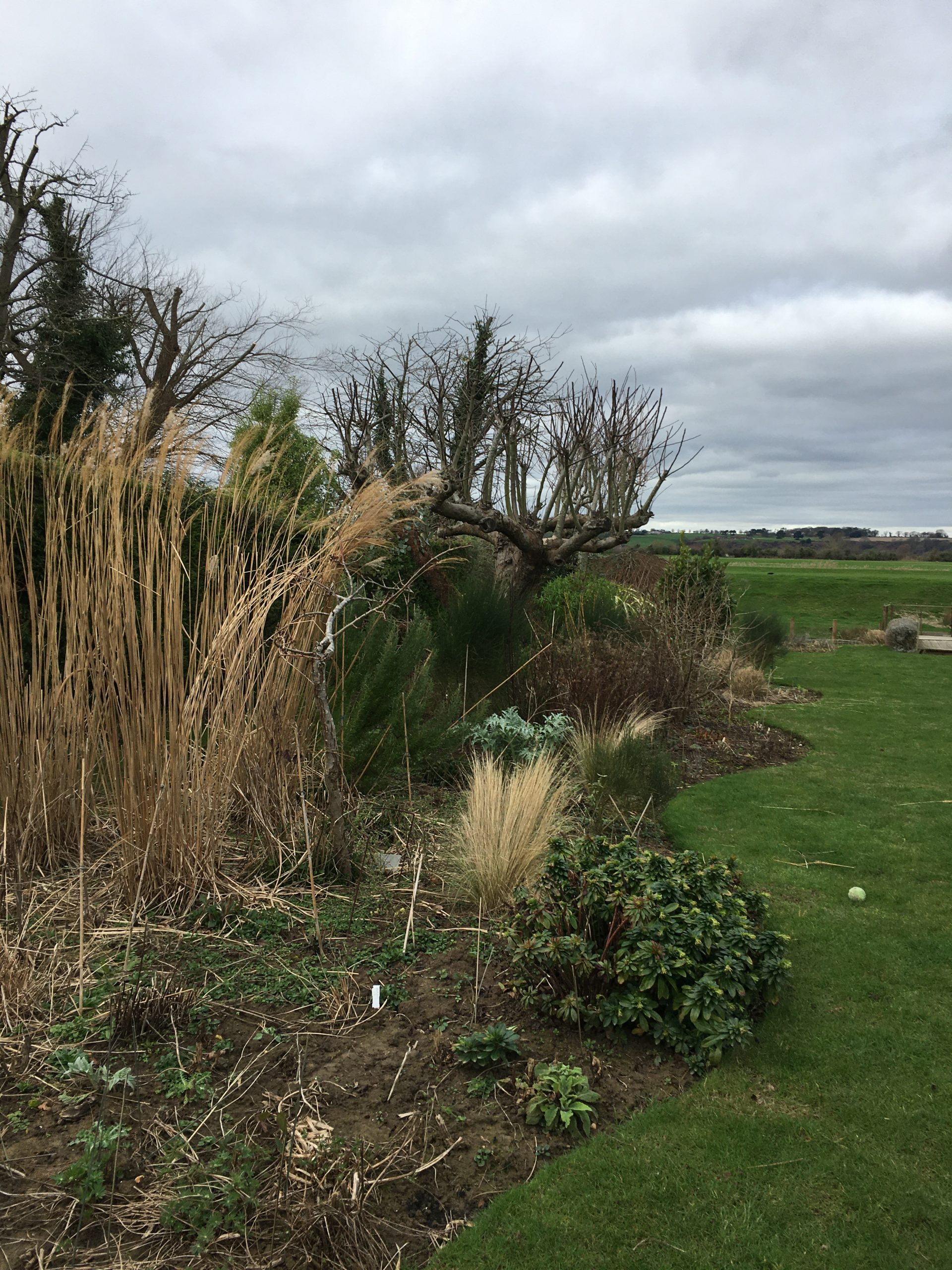 This is a good time for cutting back deciduous ornamental grasses, right back to the ground before new shoots appear. Evergreen varieties just need the old growth pulled out, they come out with a gentle tug.

Any pruning can be finished too and if you did not sort out your seeds last month do it now as some can start to be sown including sweet peas, cornflower, lots of veg – broad beans, kale, spinach and herbs but they have to be under glass. I have to say I tend to wait until March. But there is always the weeding to be getting on with. 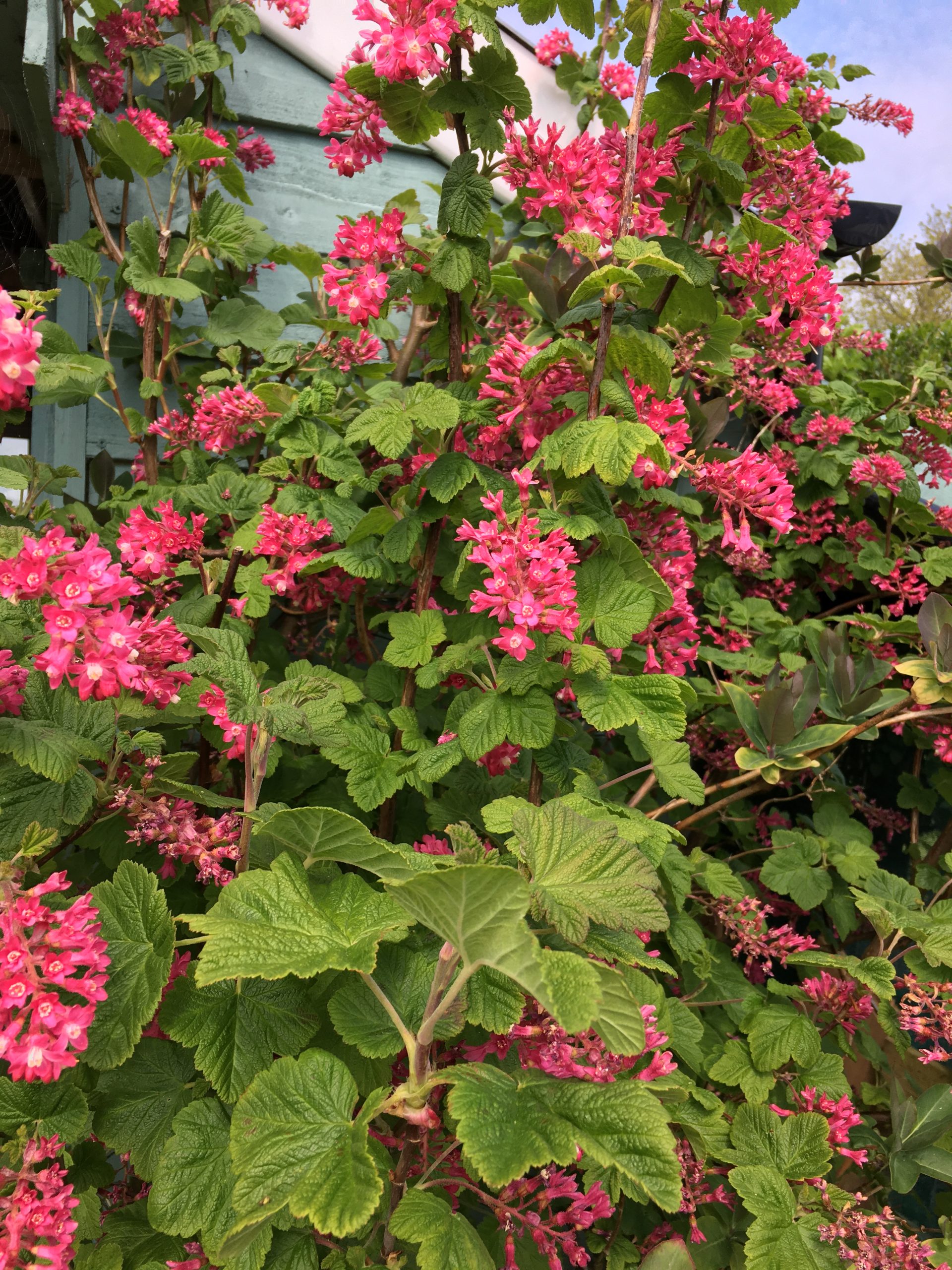 This is when it really starts to happen, days get longer, remember the clocks go forward and spring officially begins. We see cheery daffodils, crocus, muscari and other bulbs starting to come out and the flowering shrubs will gradually become a mass of colour, like the Ribes above. It will depend on the weather though as March can still be very cold with snow, hail, rain and wind, remember the old saying ‘March winds and April showers’

But there is no denying the day time temperatures are usually on the up and with more day light hours it is the month to really get on with planting seeds.  Herbaceous plants and shrubs can be planted as well as divided in March as long as it is not too wet and it is a good time to mulch. We missed our opportunity this year with it being so wet and then we went into lockdown so could not get our usual manure. You need have completed the weeding before doing this because although one of the advantages of mulching is to suppress weeds it is not a way of ignoring them. 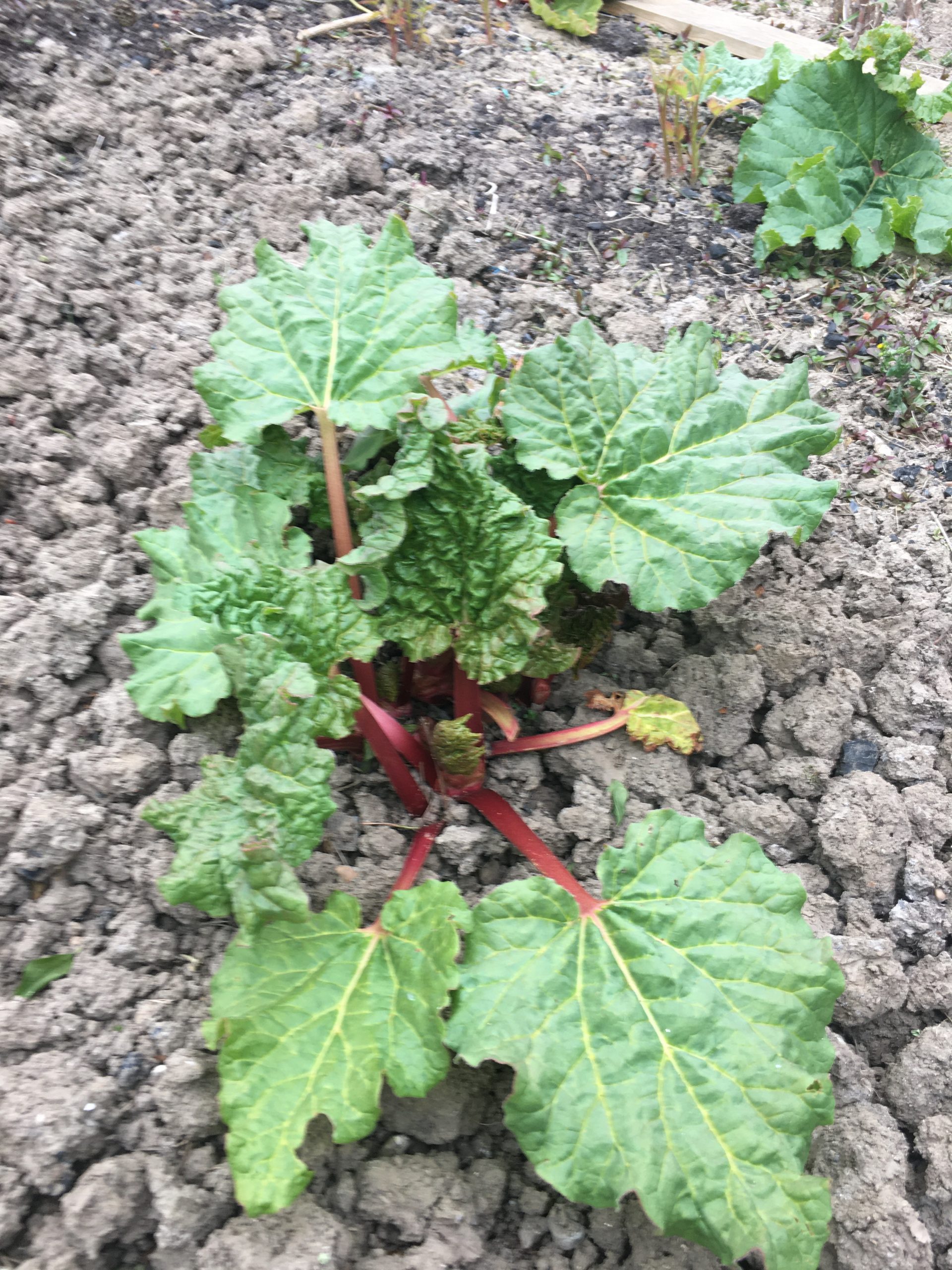 And we cannot forget early rhubarb, we plant different varieties so we have it from February right through to autumn. It has become a bit of a family joke that whenever people come for dinner or I take dessert to a someones, it will be rhubarb of some sort, be it rhubarb crumble cake, brûlée, fool or just straight forward stewed rhubarb. I love the latter for breakfast with yoghurt and why not if you have got it, use it! 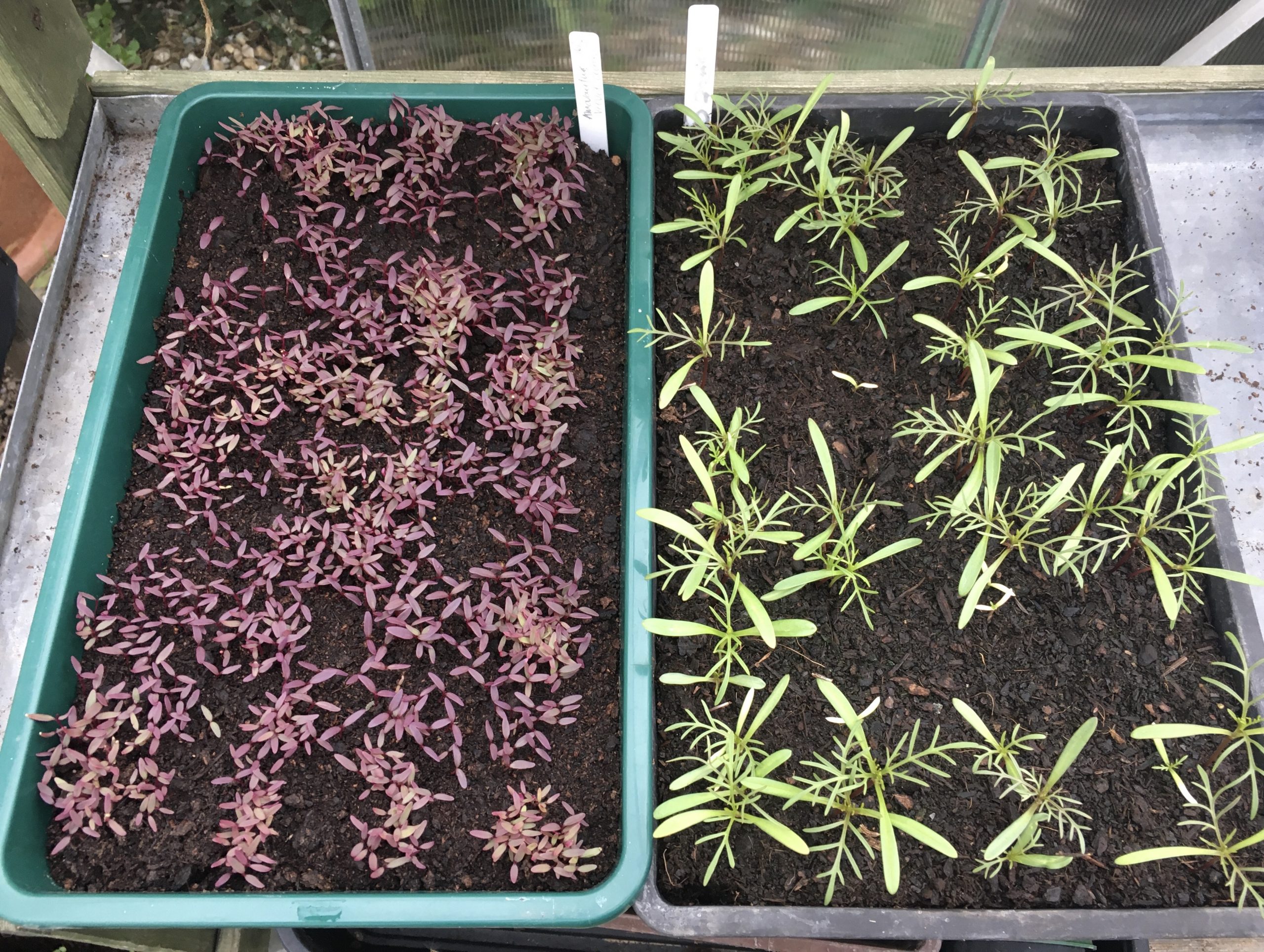 Above are the cosmos and amaranths seeds planted earlier in the month along with the sweet peas below. 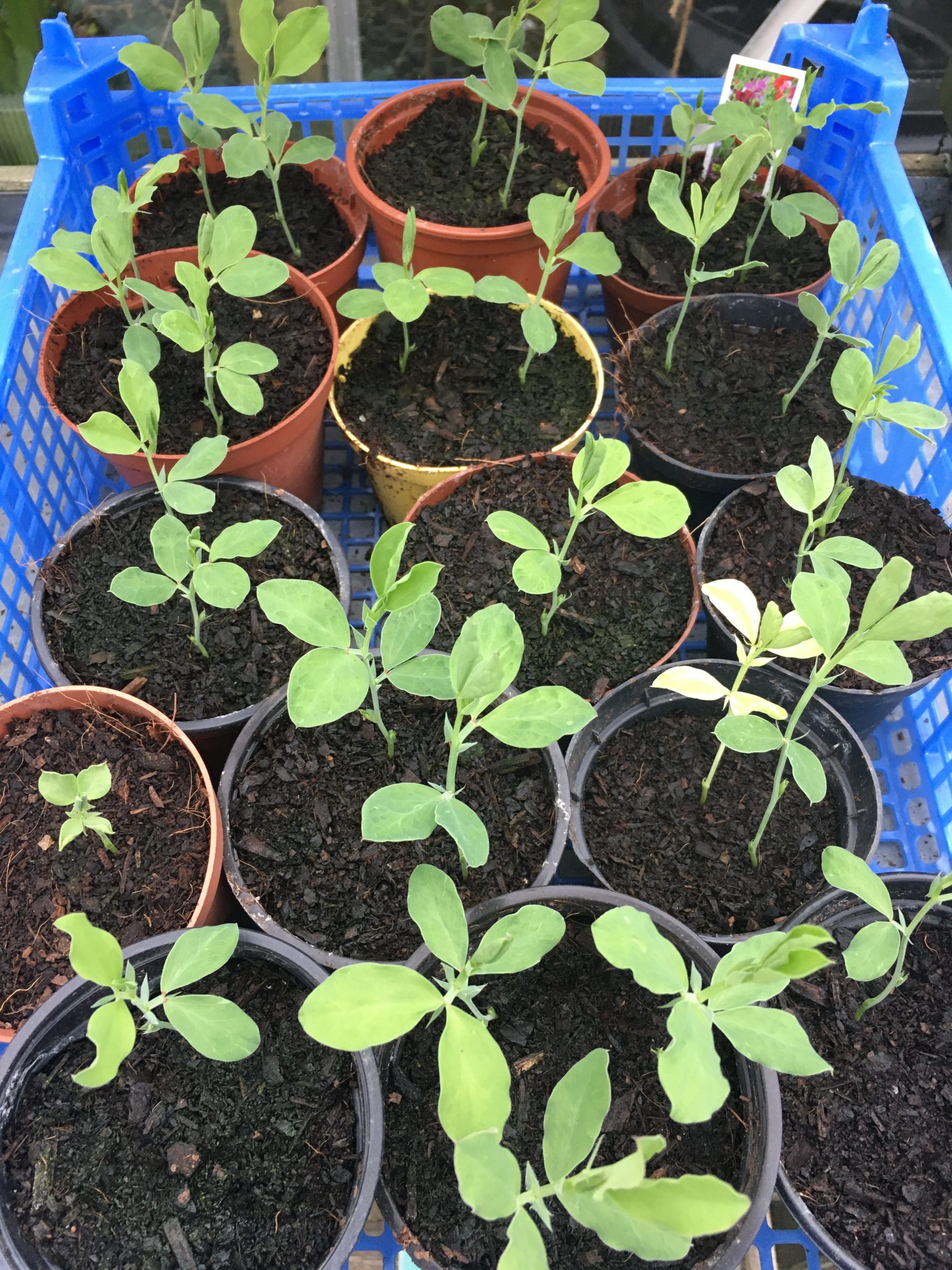 We also have larkspur, cleome which really has not come too much, penstemon, echinacea and my husband who is in charge of veg has leeks, tomatoes, peppers, courgettes and basil. We have learnt over the years only to grow what we really like and in sensible quantities. I will show how they are coming along in later posts.

Lawns are another area of the garden which start to need attention, if we have had a mild spell they might have already had a cut but March is the usual time they put on a spurt. Remember the first cut should not be too low, just take the top off. If you like to feed your lawn now is the time to do it and boarder edges may need redefining.

There may be many more jobs I have overlooked but we seem to have been busy enough as it is. Getting dahlia’s out of storage and potting them up is one you may have noticed I have omitted. This is because I believe plants should work for me and not me having to work for them! I always felt having to lift, over winter and re pot a bit of a faff so did not ‘do dahlia’s’ but I like them and they are so useful in floristry.  Therefore I do have some but leave them in and so far the majority have come back each year. I have had the odd casualty and may have to review what I do this year as it was so wet and may have lost more. It would probably be wise to do as a fellow florist friend does and that is lift some as a back up.

Also you have to remember I am only commenting on our garden, other gardeners will have different priorities, likes and dislikes but whoever you are and wherever you garden the rewards are great including pickings for a vase or two! Forsythia, ribes, rosemary, euphoriba, hellebore, muscari, broom, bridal spirea and grevillea – spring in a jug! 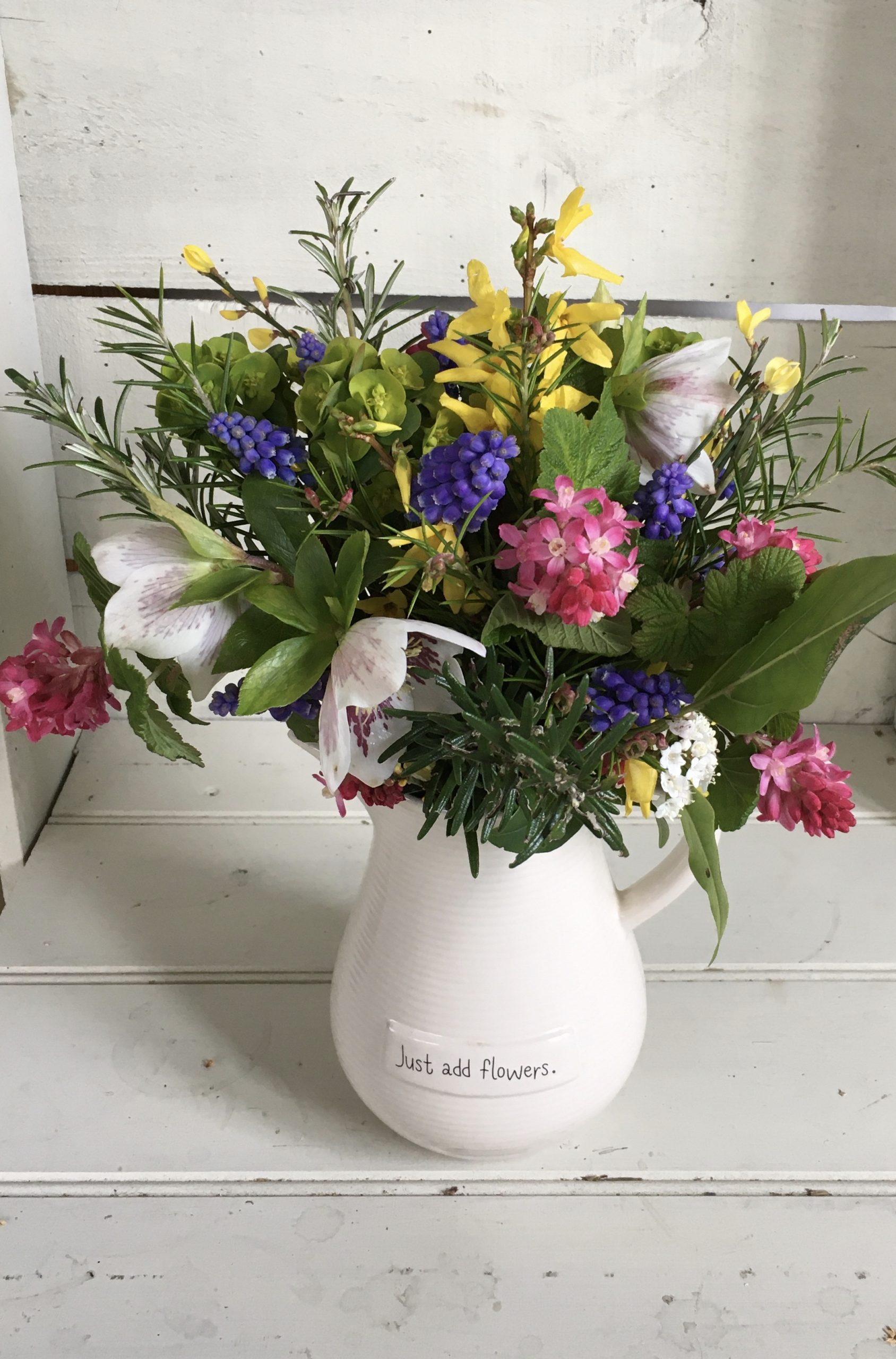