The time spent in the garden can really increase now. More seeds to plant, inside and out. We recently planted ammi straight into the prepared bed amongst the delphiniums and I sewed zinnia’s which will need to geminate in the greenhouse. 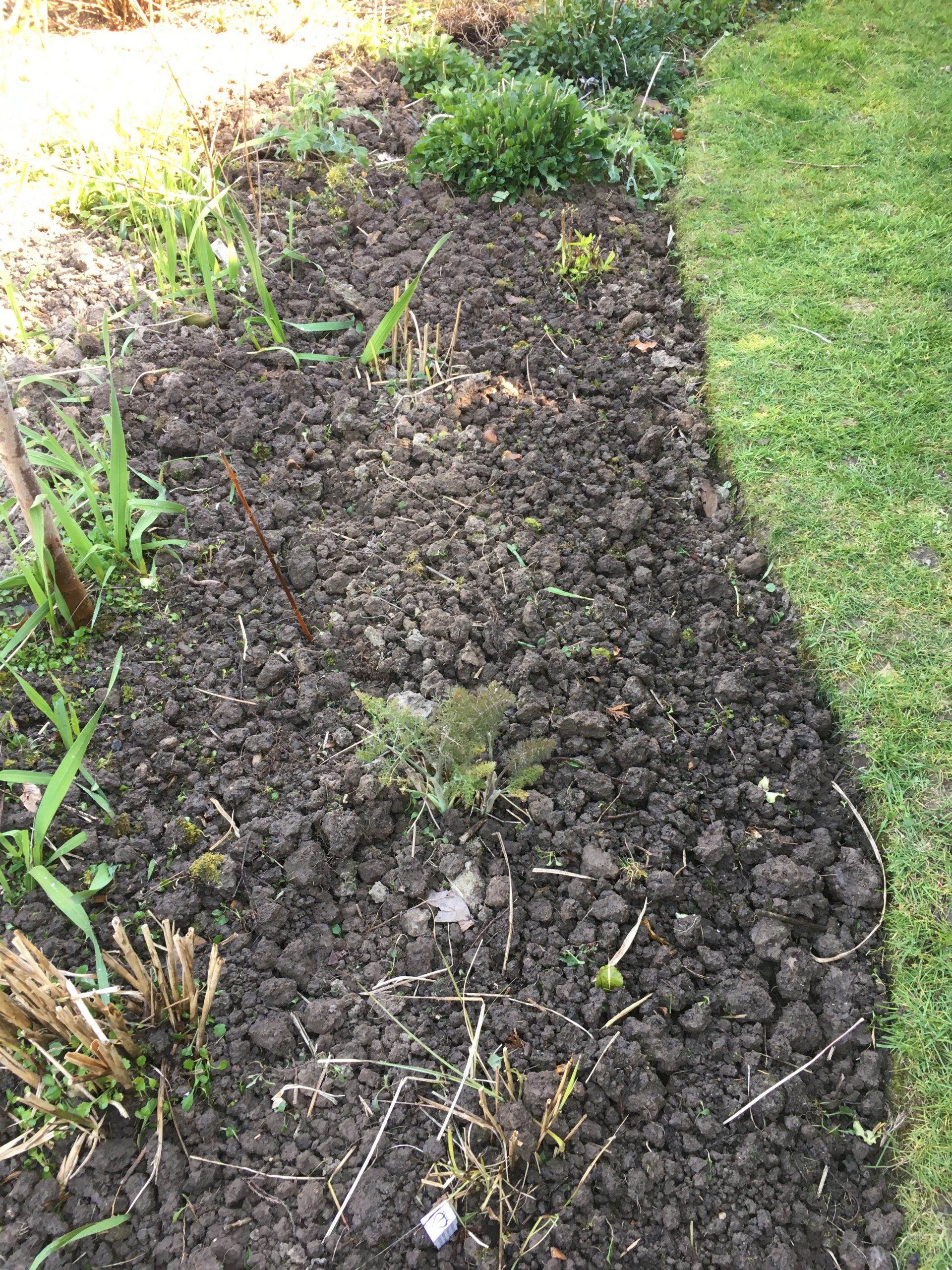 I will be able to show in later posts how these are coming along but we do have some in the greenhouse just in case!

Some of the earlier planted seeds like sweet peas are now large enough to be planted out which hubby kindly did and made the climbing structure, it does not look very pretty now but wait until it is covered with flowers! It is very important to keep sweet peas well watered. 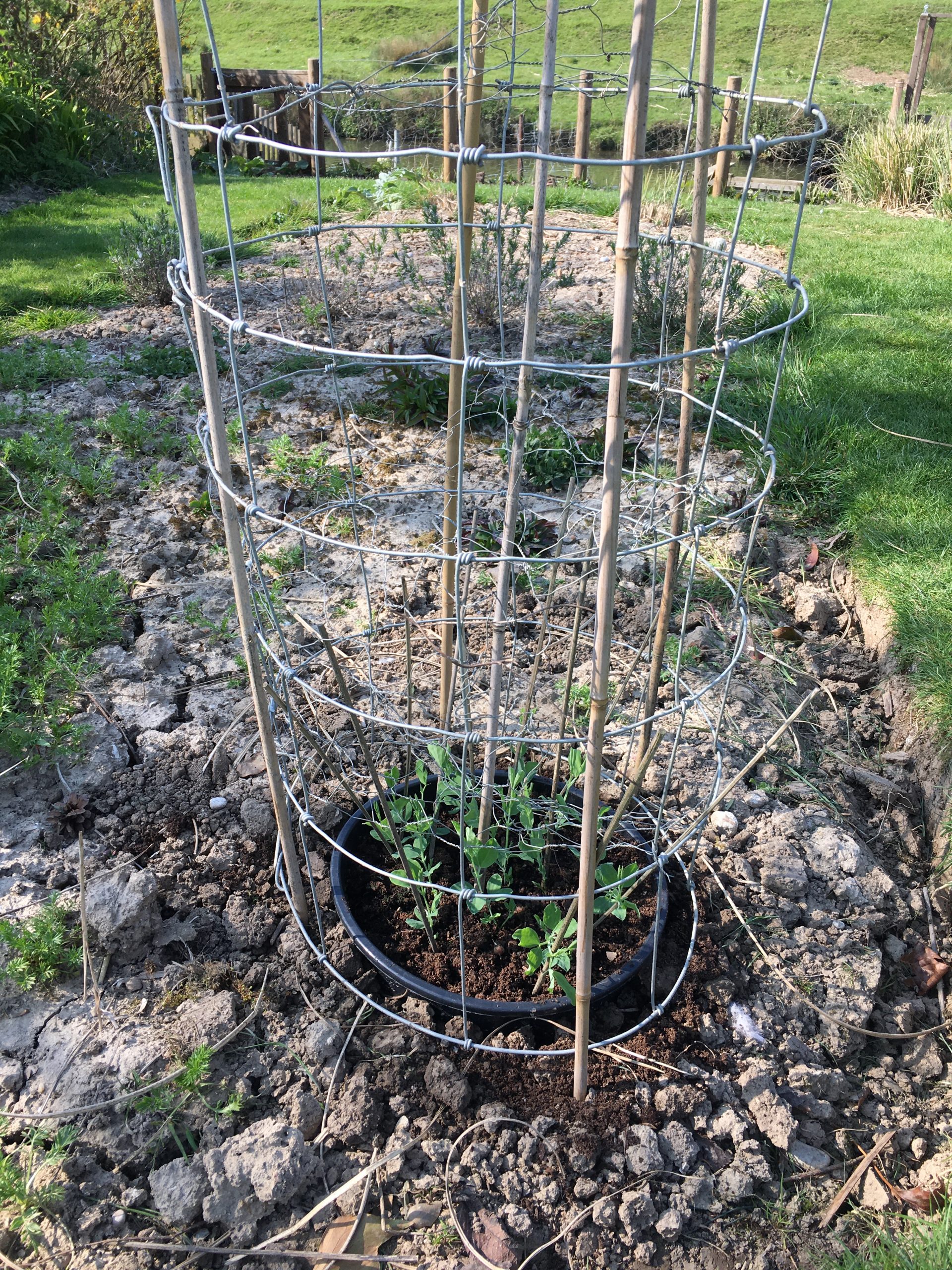 I could not believe how quickly these zinnia’s started to germinate, planted on the 10th April and showing 4 days later! And no I am not trying to trick you, it is the same batch, I did 2 trays hence the different colour pots! 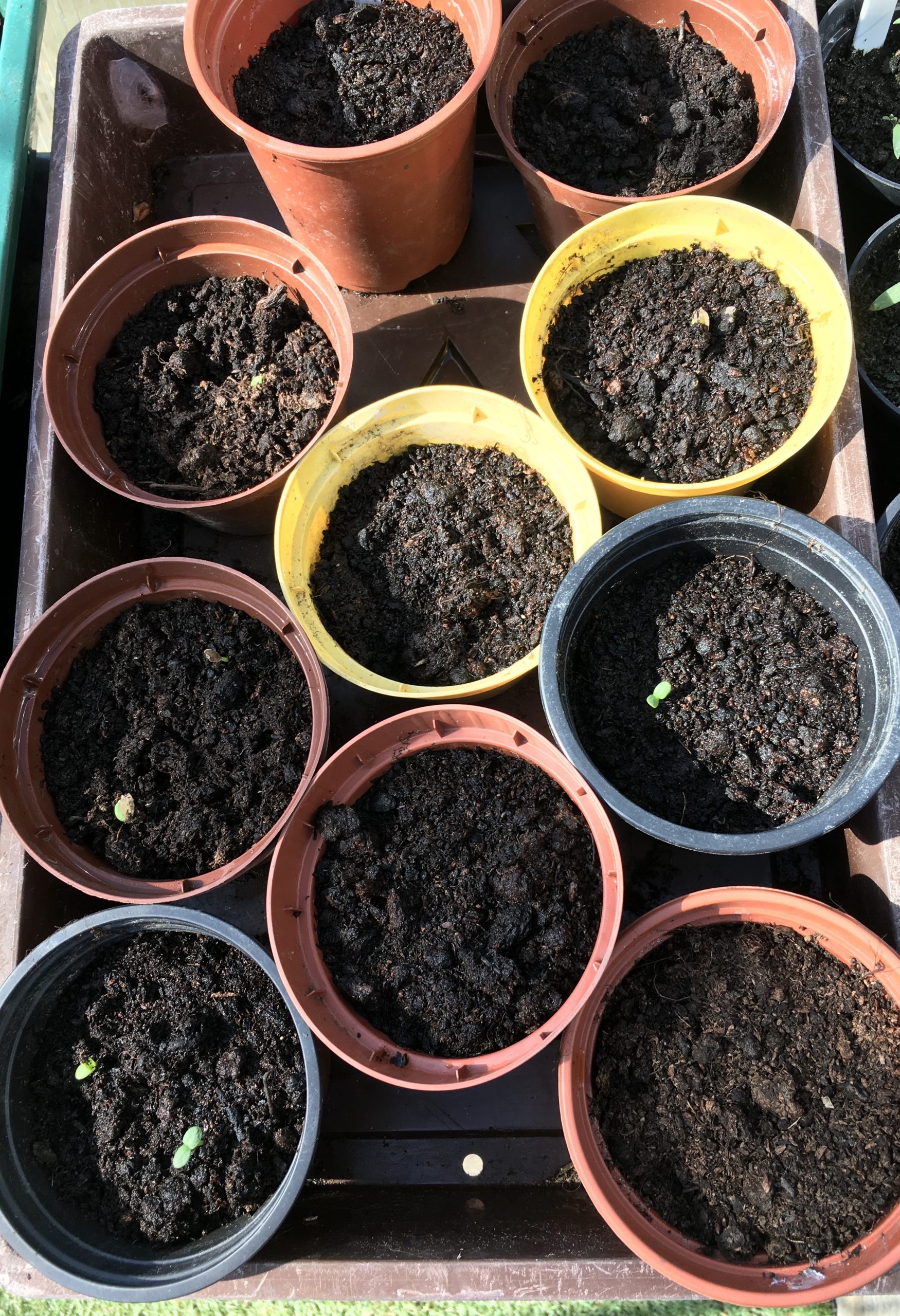 We put in staking frameworks at the beginning of this month in the boarders to support the likes of the delphiniums and ammi mentioned above along with the lupins. 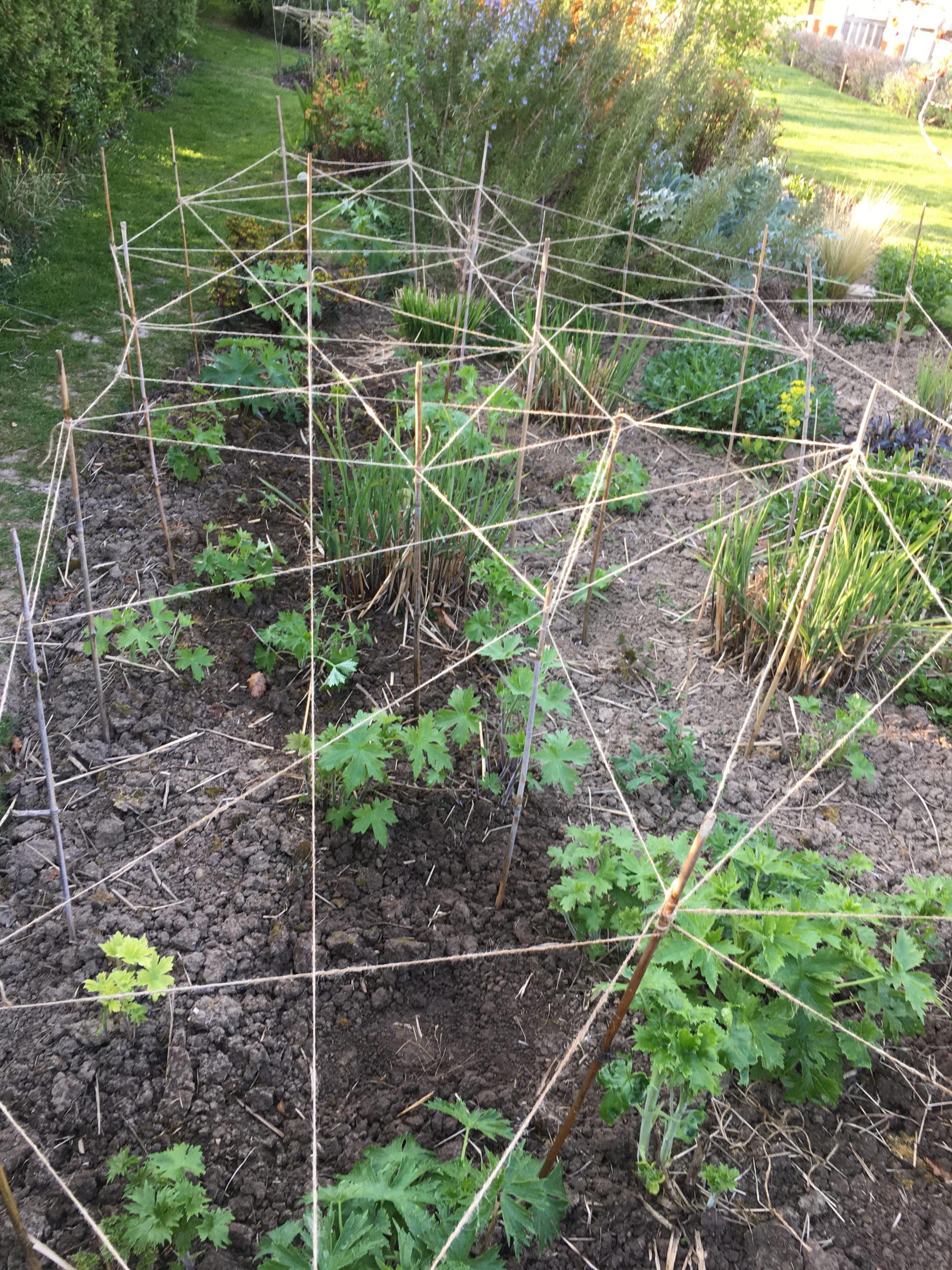 It can be a tedious task but so worthwhile as the plants gain height.

Many plants are starting to show now and literally increase in height by the day, solomon’s seal (polygonatum) being a great example along with the alliums, peonies, dahlia’s and scabious which seems to be a bit confused as it is rather early. 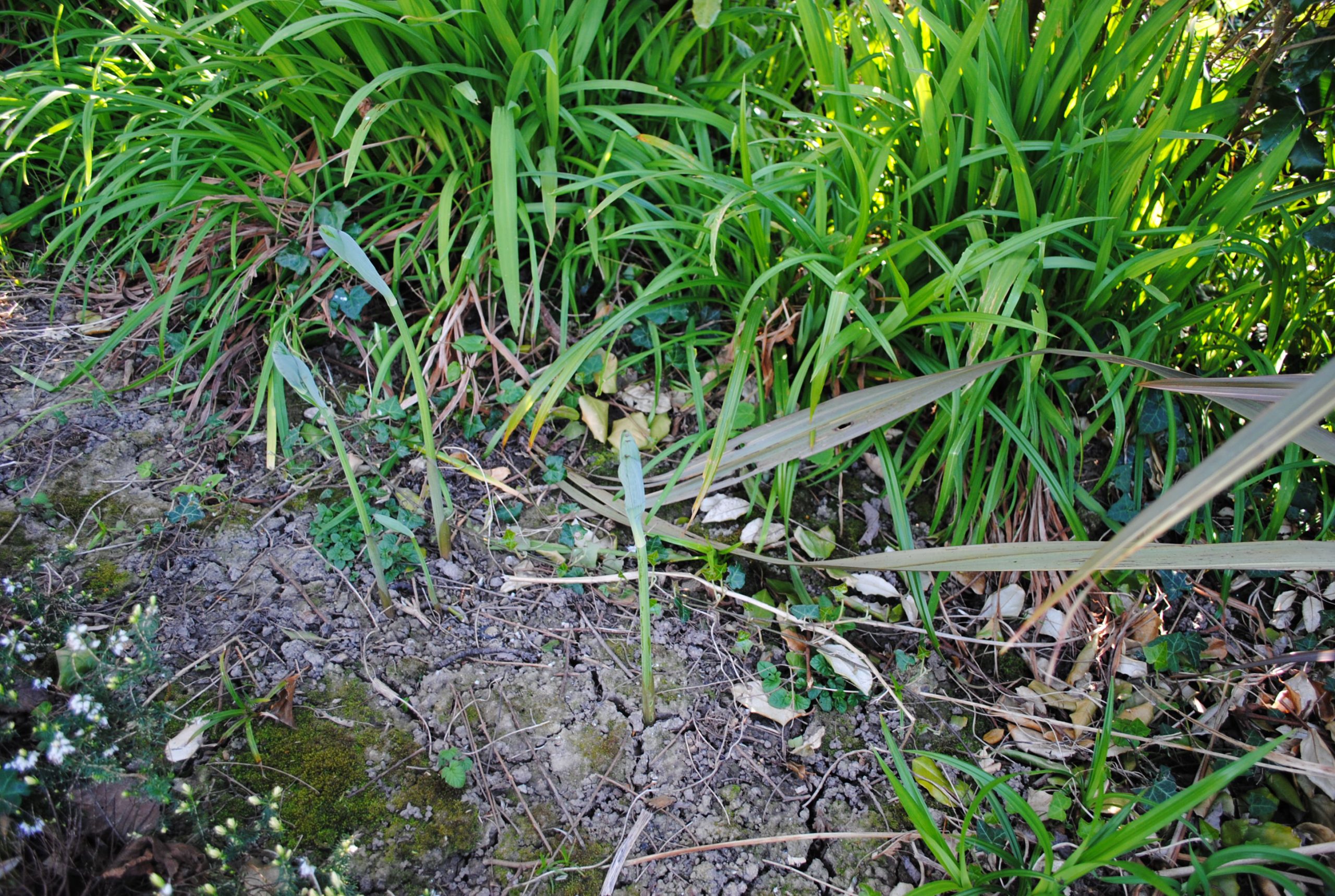 You can just about see the stems in front of the pesky wild garlic, it is everywhere and so invasive. I know you can use it in cooking and may be I will try it one day but for now I just want to get rid of it! 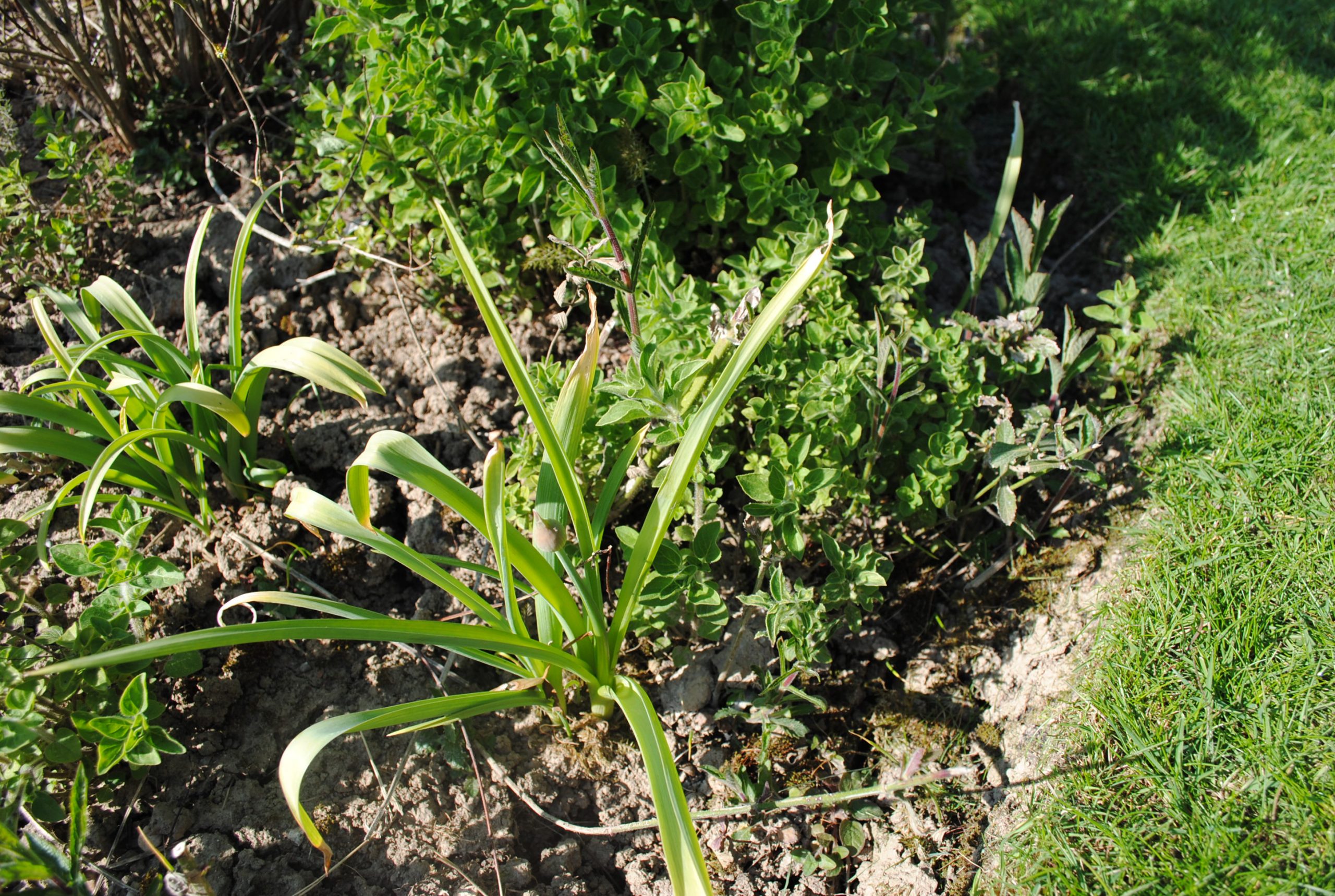 Again probably quite difficult to see the allium bud but it will not be long before it bursts into flower. Much easier to see the peony buds below. 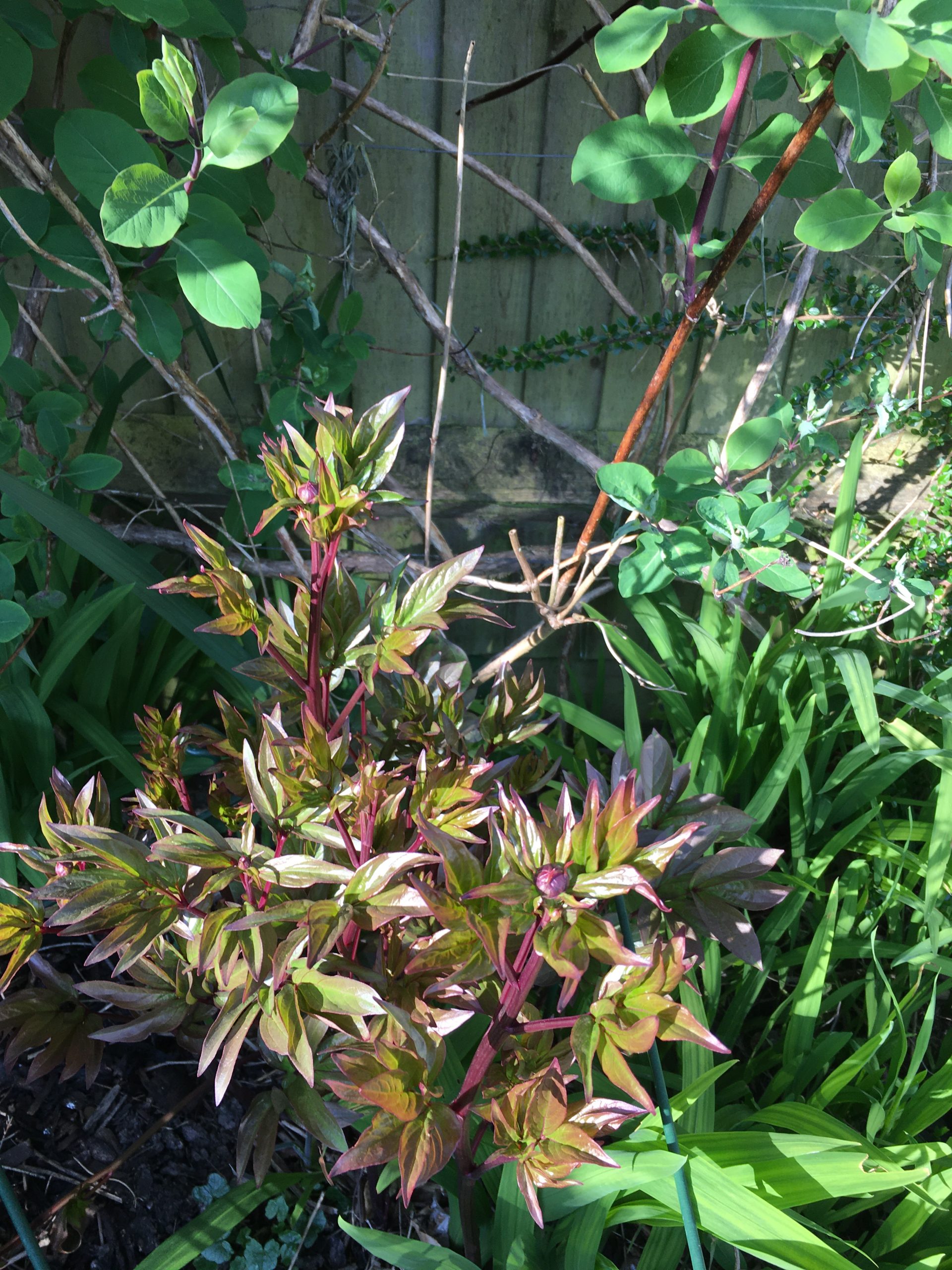 The Cytisus or Broom puts on a lovely show now as does the Bridal Spirea (Spirea Arguta). 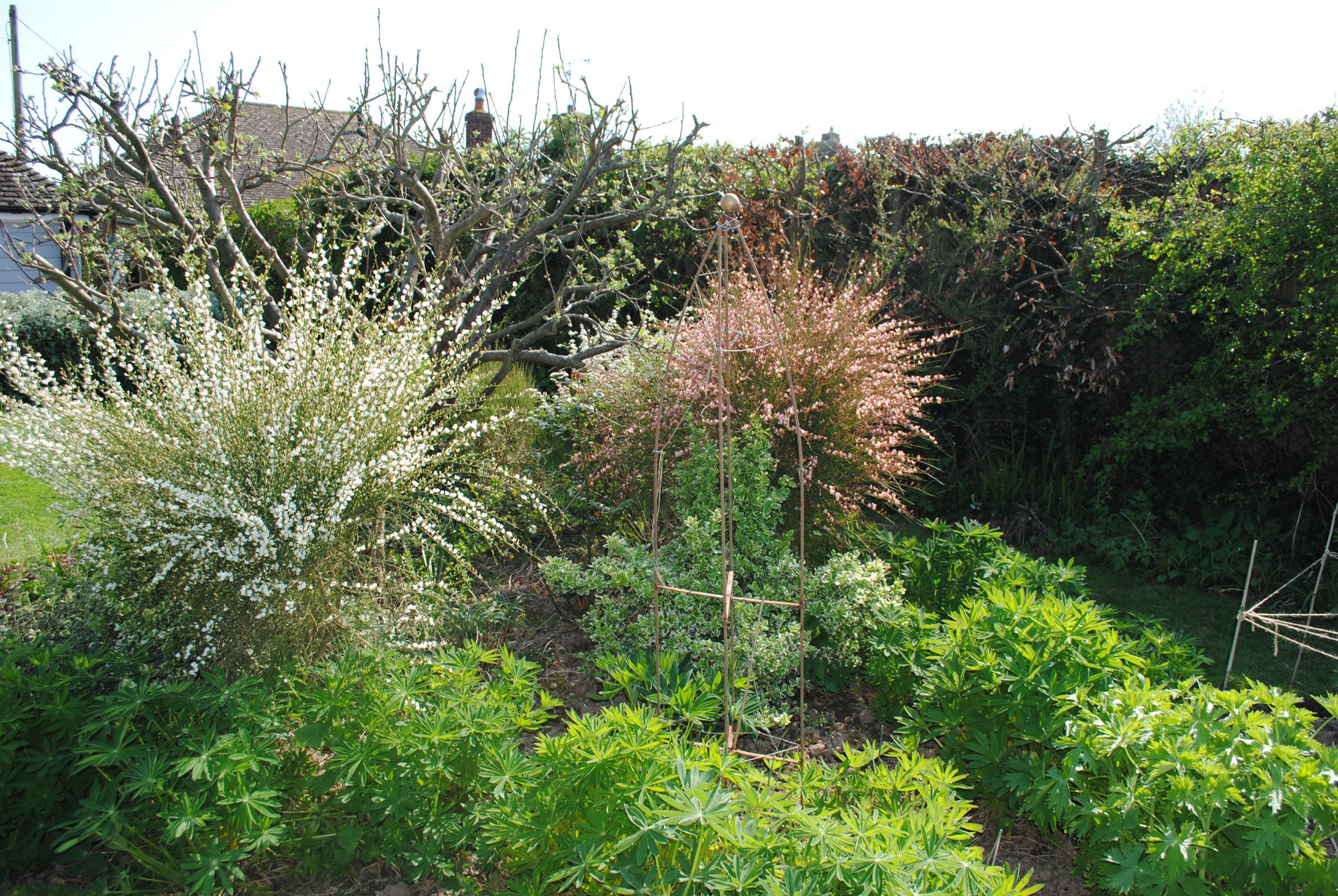 All the boarders are starting to bulk out but still with spaces for the annuals. Here is a view from the top of the garden. 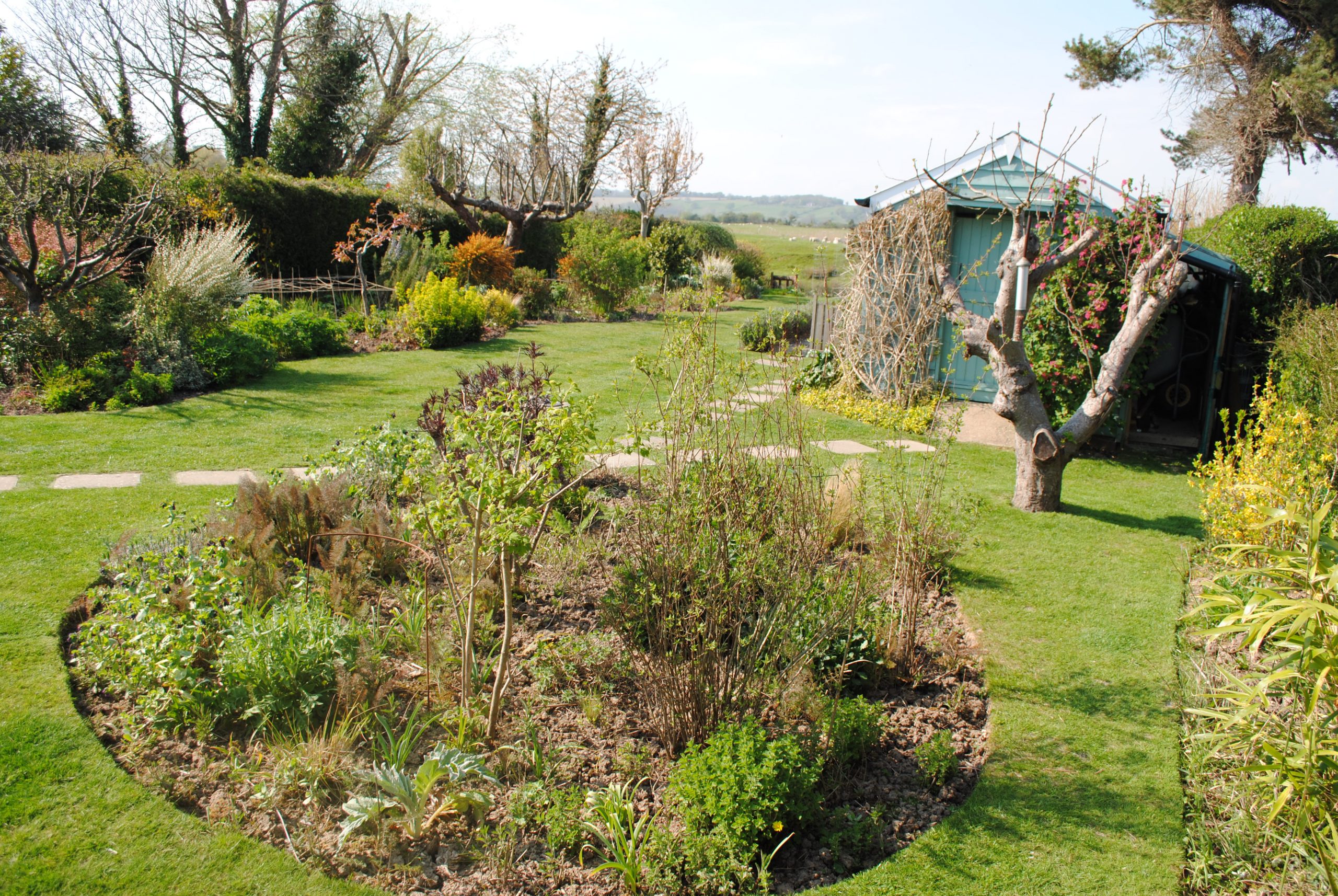 I do not often show the ‘mauve’ bed in the fore ground for some reason but you will see in the months to come it is quite striking with the central black elder, alliums, self seeding cerinthe, verbena, bronze fennel, scabious along with philadelphus and alchemilla mollis to lighten it.

And the shot below is of those circular beds we linked to make one continuous boarder. 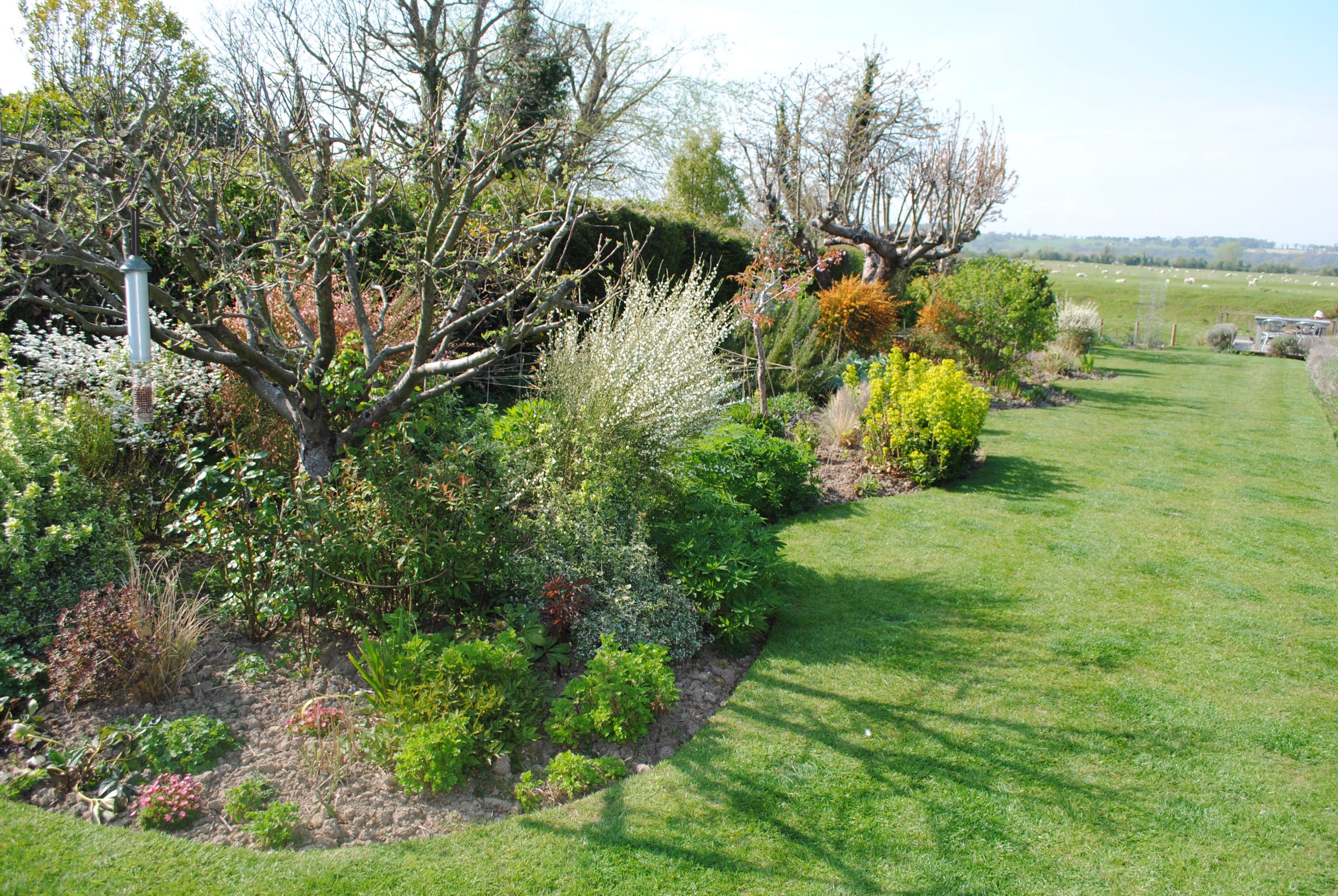 Having decided to write this blog I have been going round the garden and realise how many areas still need a lot of attention, particularly the boundary boarders. We have rather neglected these or just dumped plants in whilst deciding what to do with them. One area which half way house is an area at the bottom of the garden which is shaded by next doors trees and has some nice shrubs/plants but needs sorting out. It actually does not look too bad but the cordylines have all merged into each other, the grevillea out grown its space and nature has a habit of taking over here. 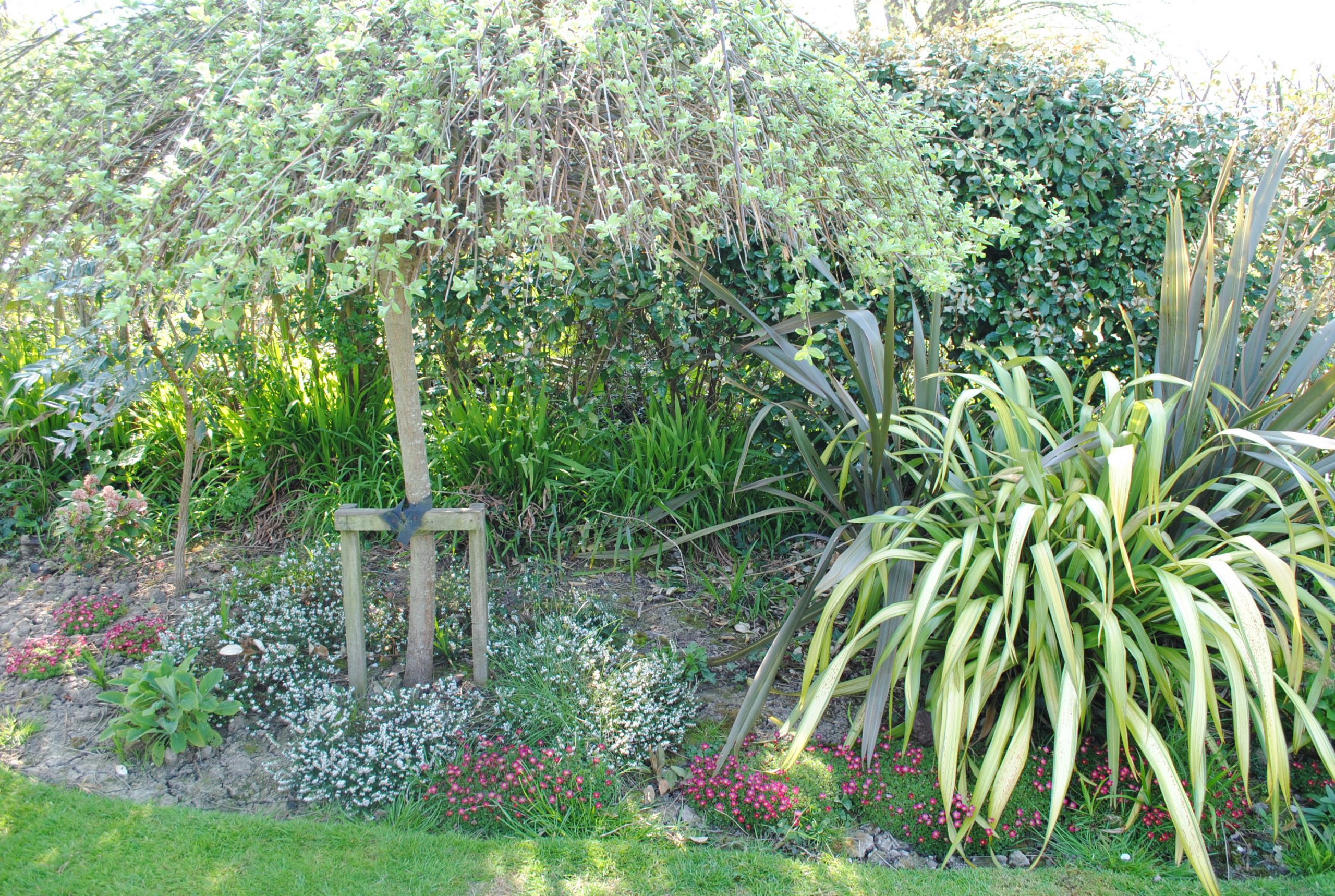 Also this is a good time to mention that gardeners are always learning and make mistakes however experienced and of course we should learn from these. I did a classic recently. Having over wintered Salvia Amistad in the greenhouse, we bought it in the autumn last year, with the spell of warm weather we had over Easter I planted it only to get a frost a couple of days later. It is now being protected in the hope that I have not given it such a shock as to kill it! Why I did not stick to my usual rule of waiting until after the first May Bank Holiday before planting anything too tender I do not know! 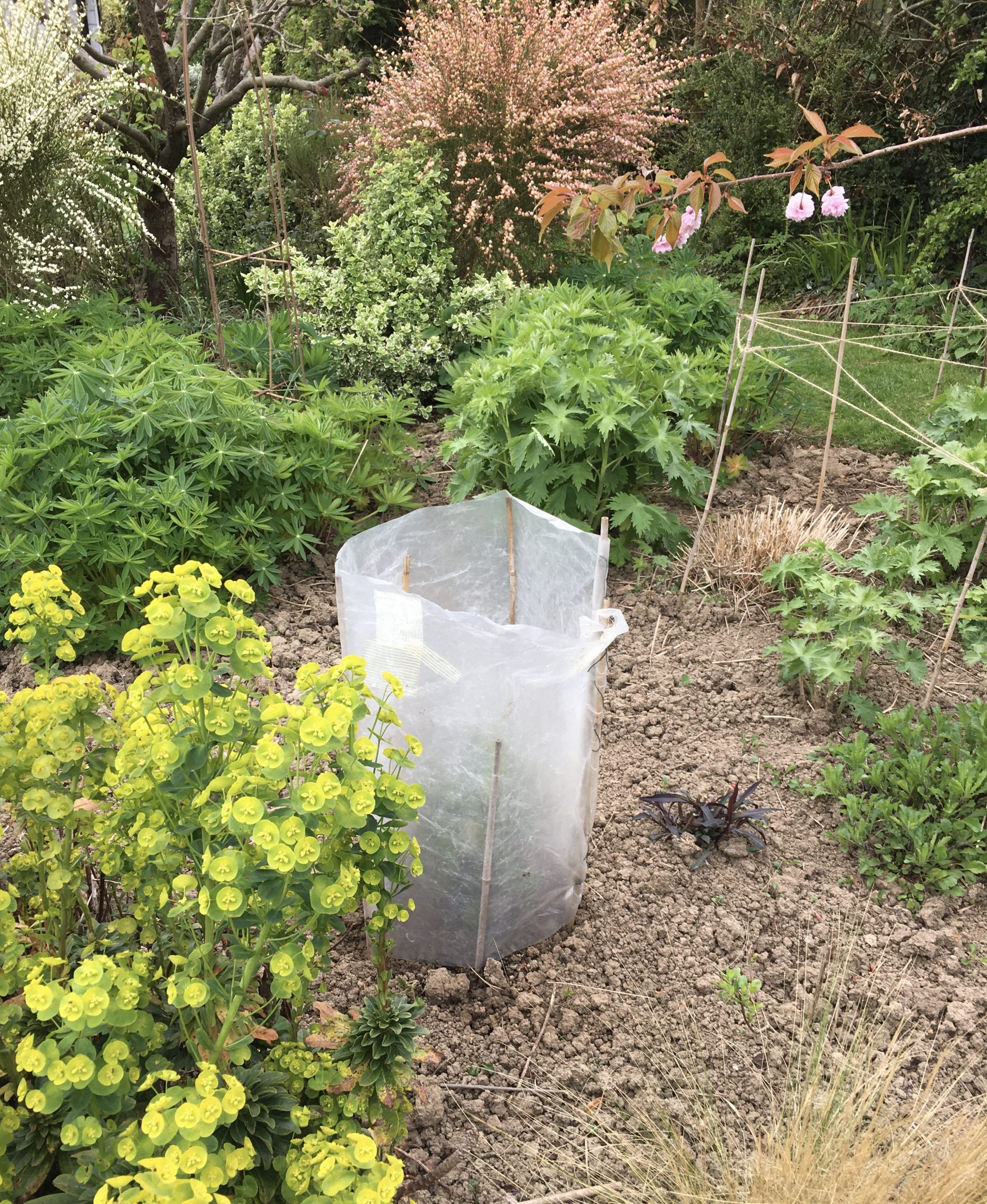 This is becoming rather lengthy but I did say it was a busy month! Also that a garden is always evolving, remember those lovely lavender along the path from the post showing the development of the garden? 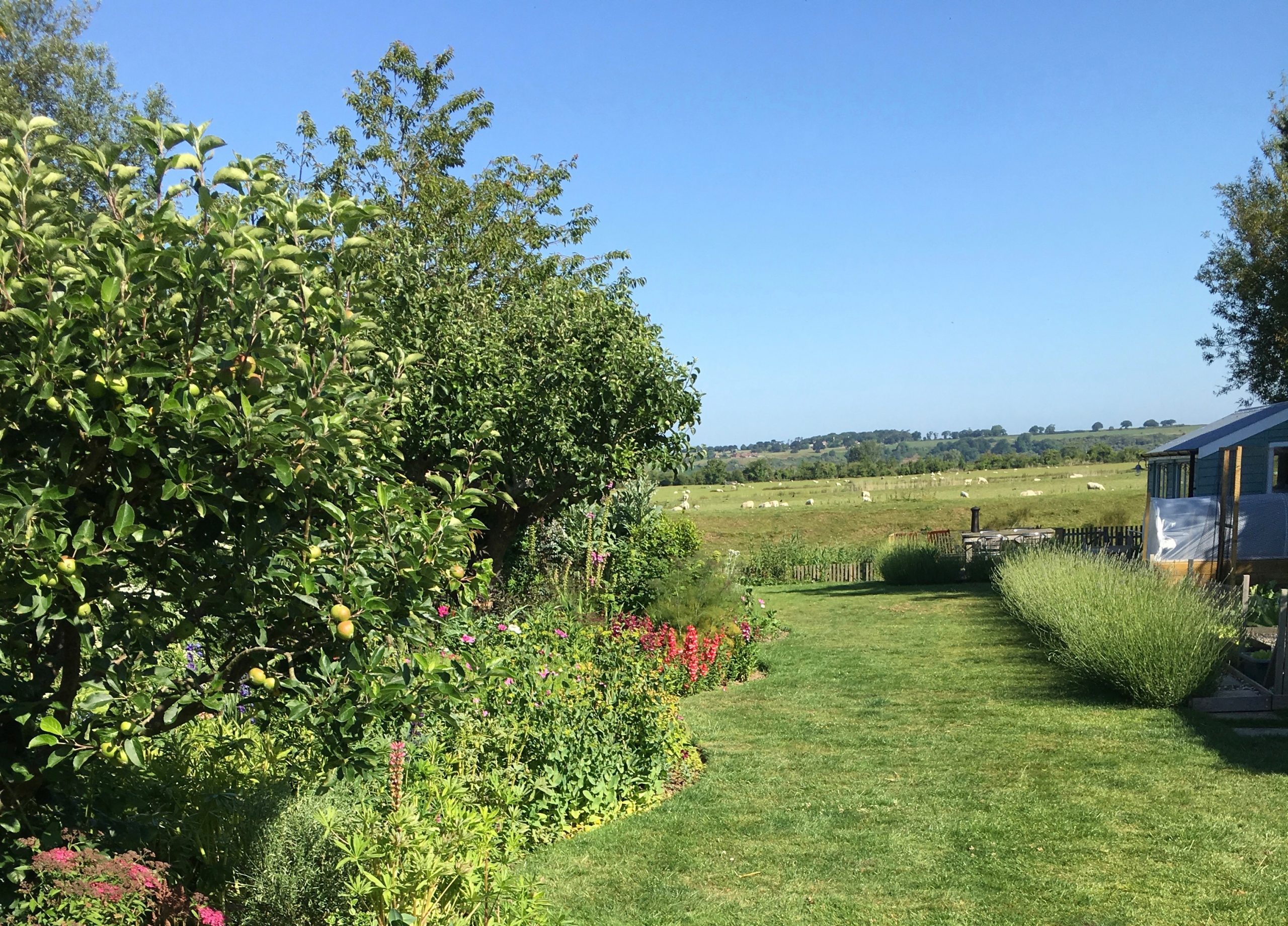 Well this is what they looked like after a wet winter. 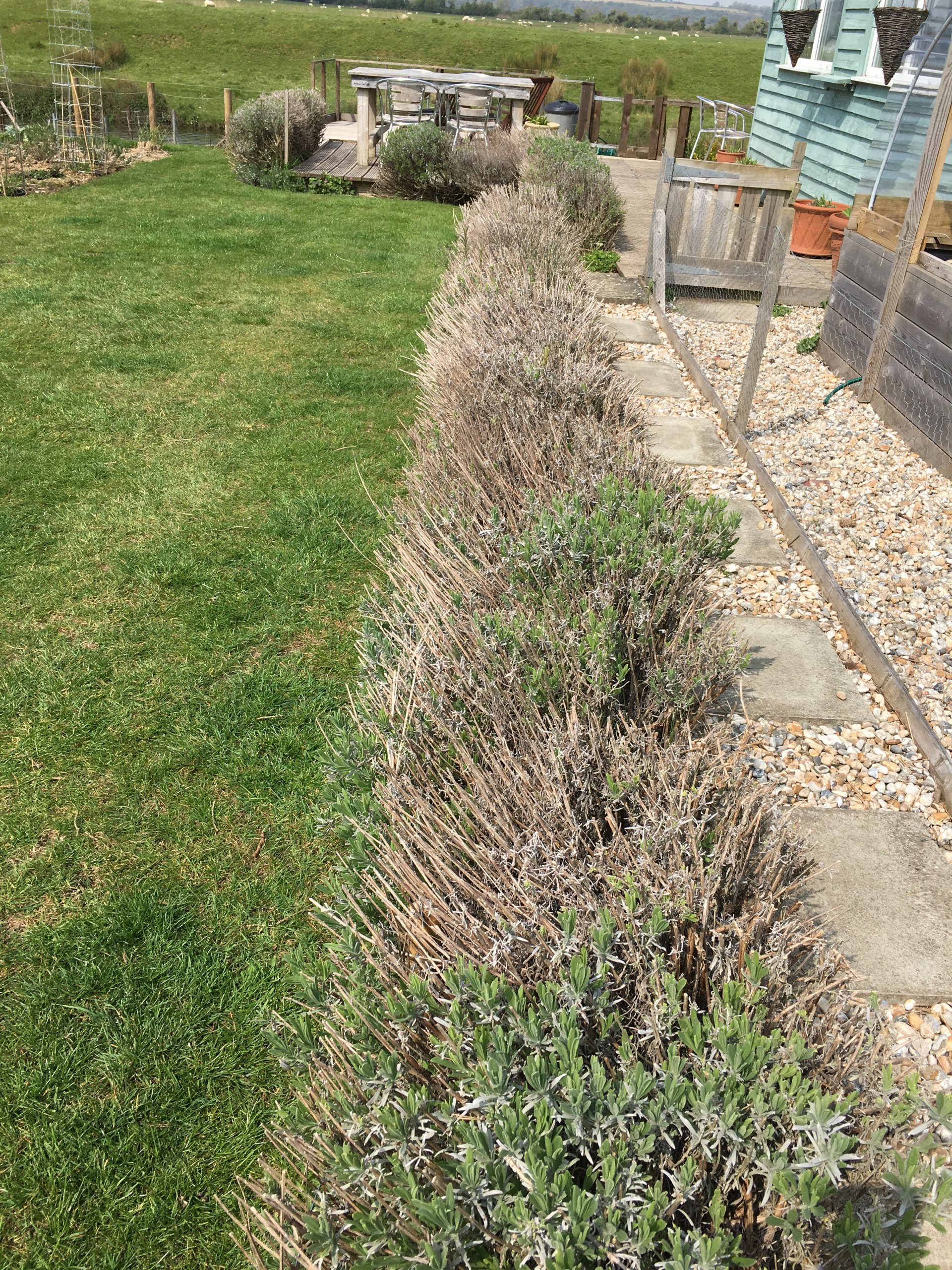 So we are replacing them. Hubby’s hard work after removing them and digging over ready for when new plants arrive next month. 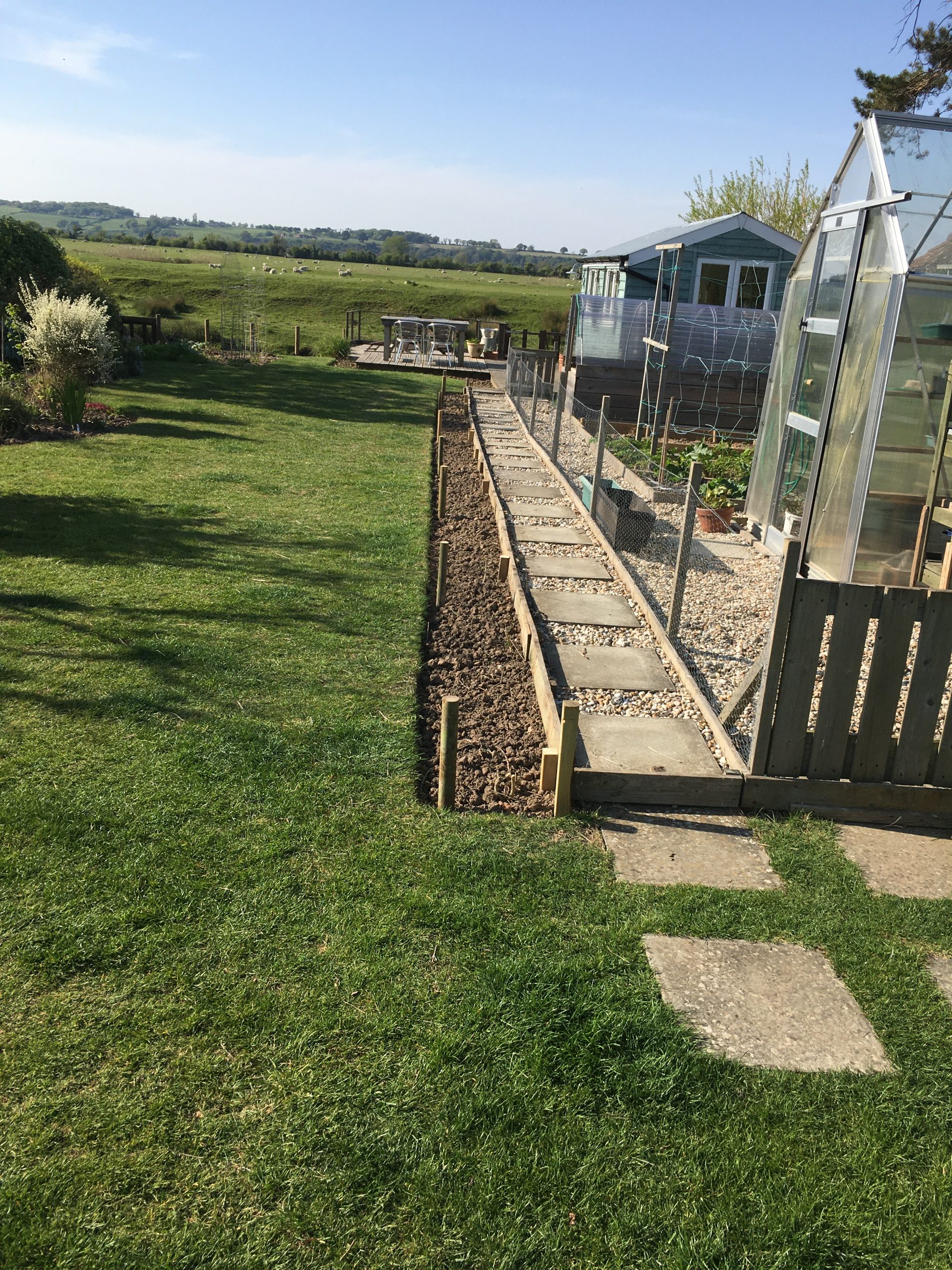 Some of the better ones have been planted in one of those neglected boundary boarders and we are keeping our fingers crossed they survive. 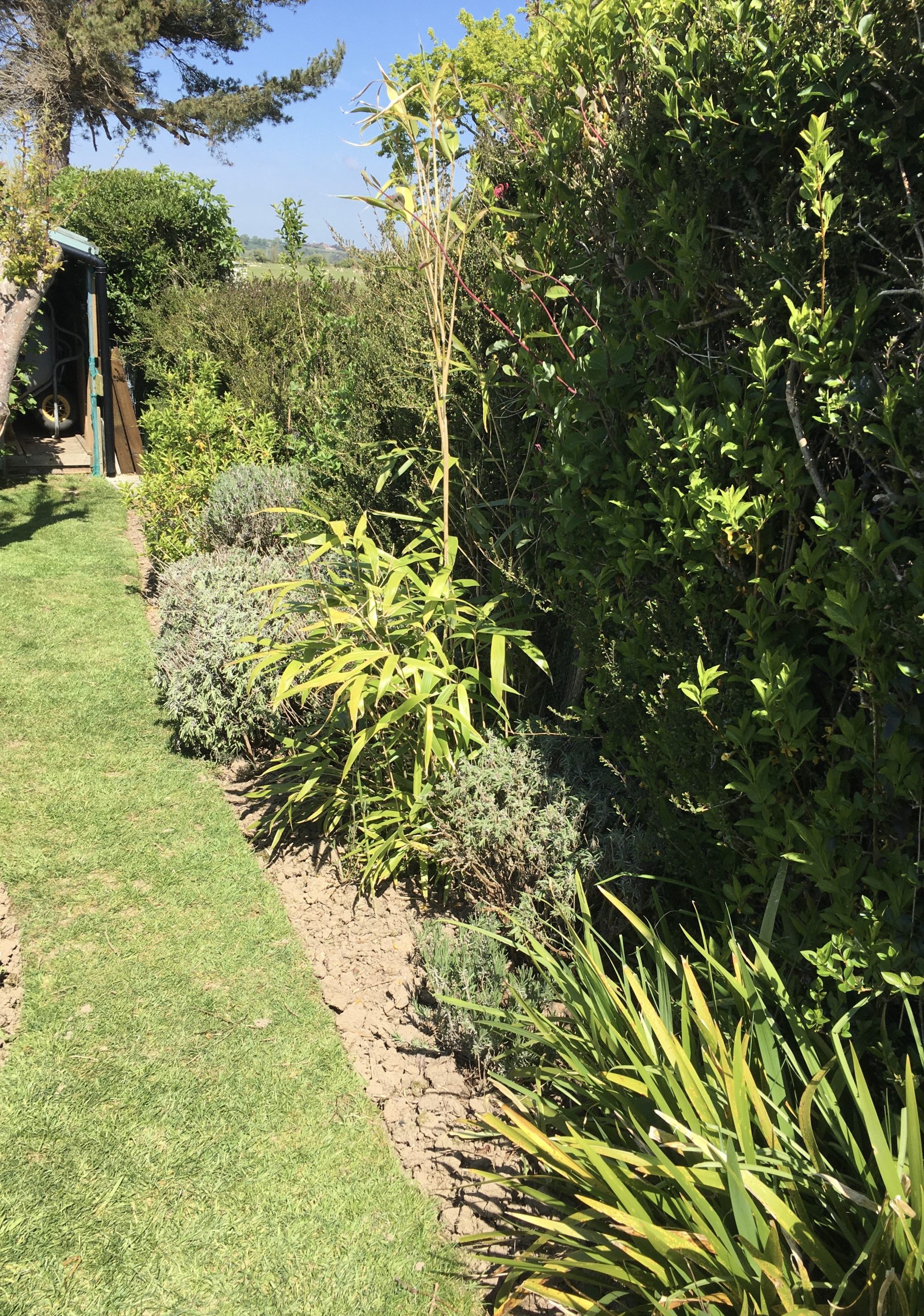 A problem we find with boundary boarders is that you have no control over what your neighbours grow or how well they will maintain their gardens and we have bindweed, ground elder, brambles, ivy and those pesky wild garlic to contend with. It is a matter of keeping top of them so they do not take over.

It is incredible how things are changing on a daily basis at the moment, as we are having such a lovely long spell of warm weather everything is well ahead, below are how the Soloman Seal are looking after only 2 weeks, they can be seen a few inches high in an earlier photo. 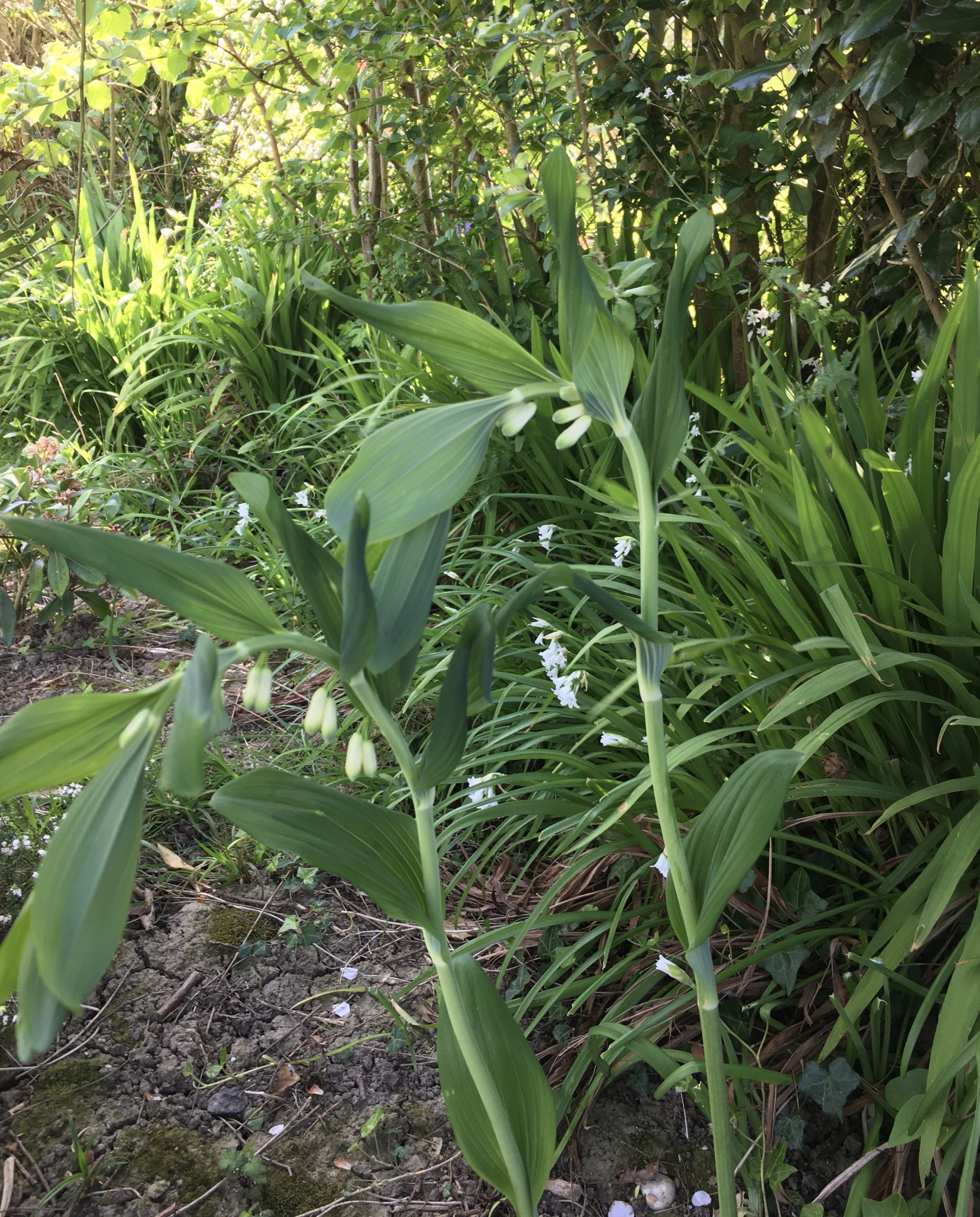 This reminds me of a wedding a few years ago now. A bride wanted mainly tulips for her May wedding and her mother was growing them. She had done a trial the year before but in the year of the wedding we had a very warm spring and by the time of the wedding all the tulips her mum grew had gone over, so plan B had to be put into action – our trusty wholesaler saved the day. It is a lovely idea to grow your own wedding flowers but you have to be flexible and really have what is available rather than be to transfixed on a particular flower.

Many of the seeds having been re potted are now in need of ‘hardening off’ which means taking them out of the greenhouse to get accustomed to cooler conditions before being planted out. 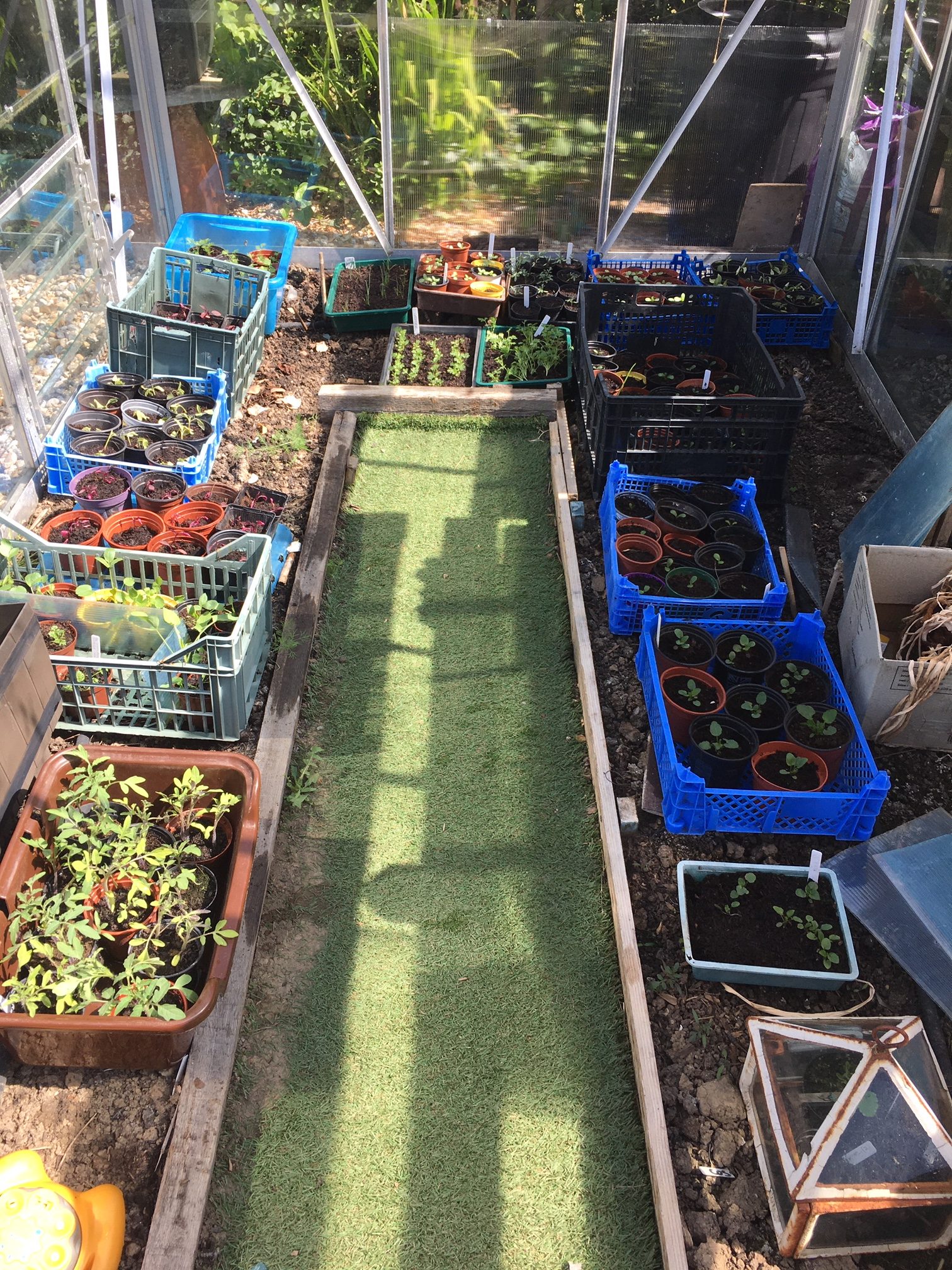 A cold frame is the ideal place, hubby has been at work again converting old shelving. However if you do not have this luxury, finding a sheltered spot against a wall or the shed will give some protection. 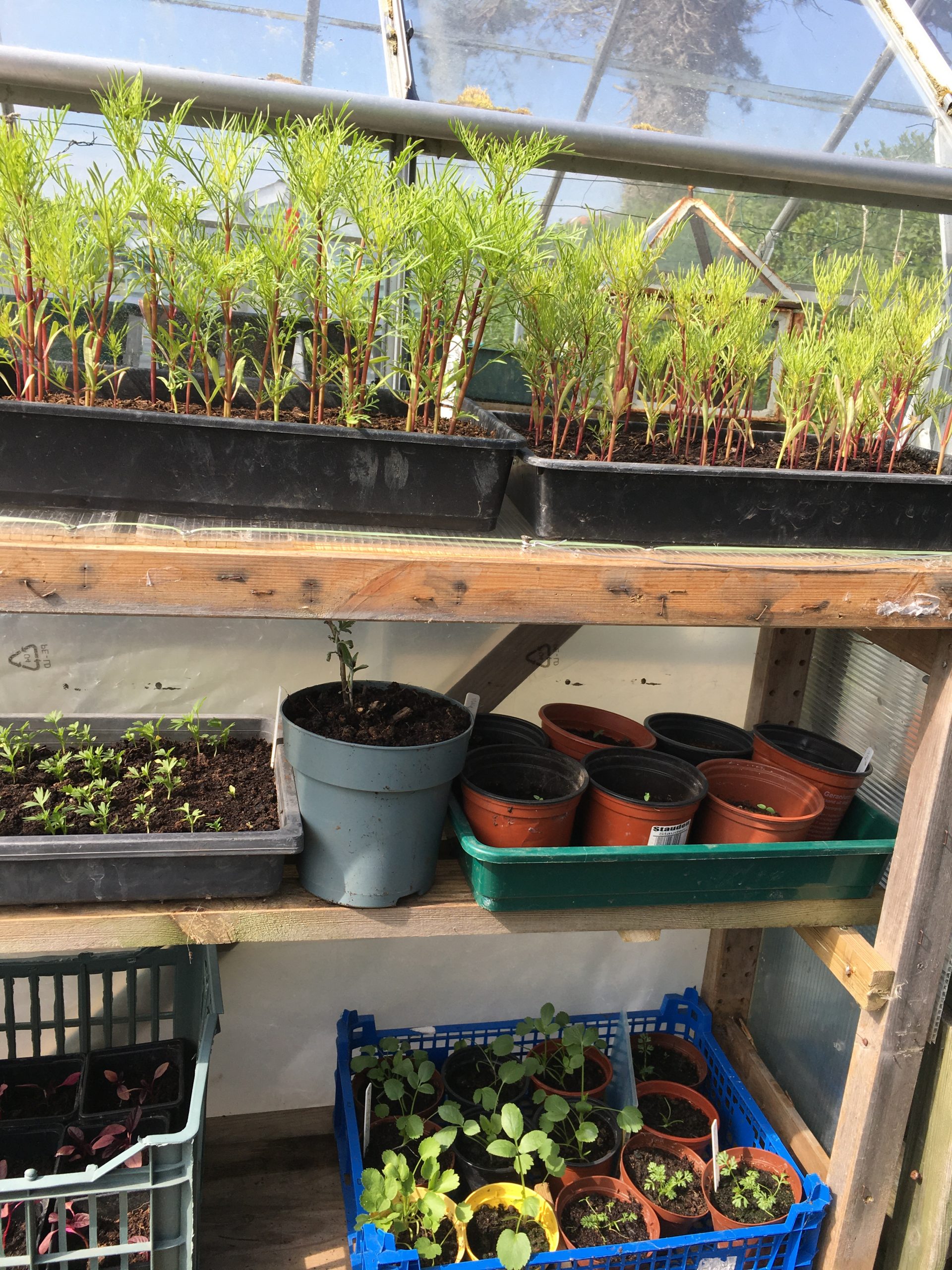 So far I have only mentioned the back garden but we also have 2 areas at the front which  need working on including the furniture! This shot includes the crocosmia where we are lucky enough to have a mallard nesting who does not seem to be bothered by Winnie, our cocker spaniel, lets’s hope she behaves when they hatch! 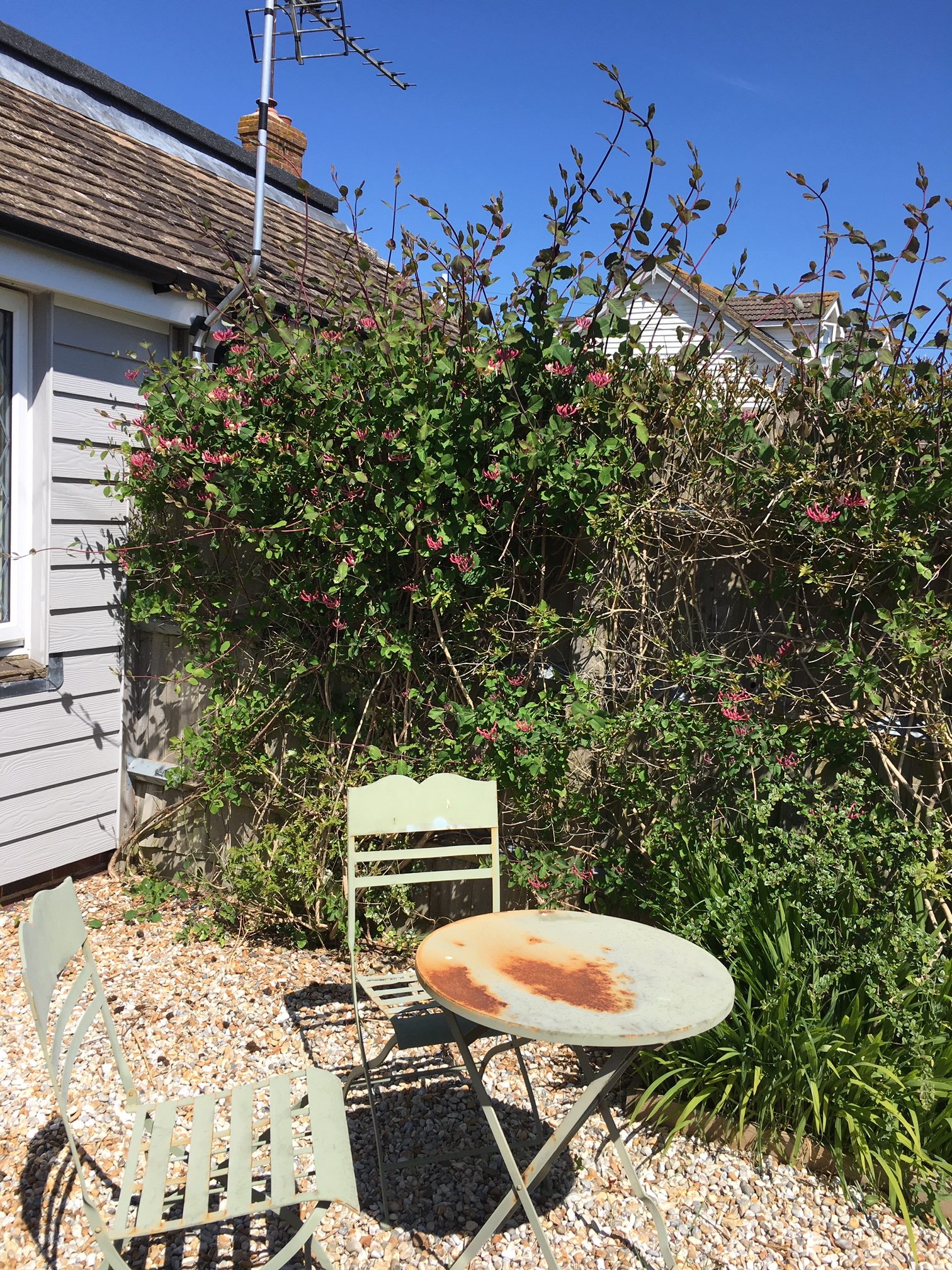 And below is the drive area, again in a photo it looks ok but get close up and the bed has many weeds, grass, shrubs in need of shaping and generally could do with a good old tidy up. 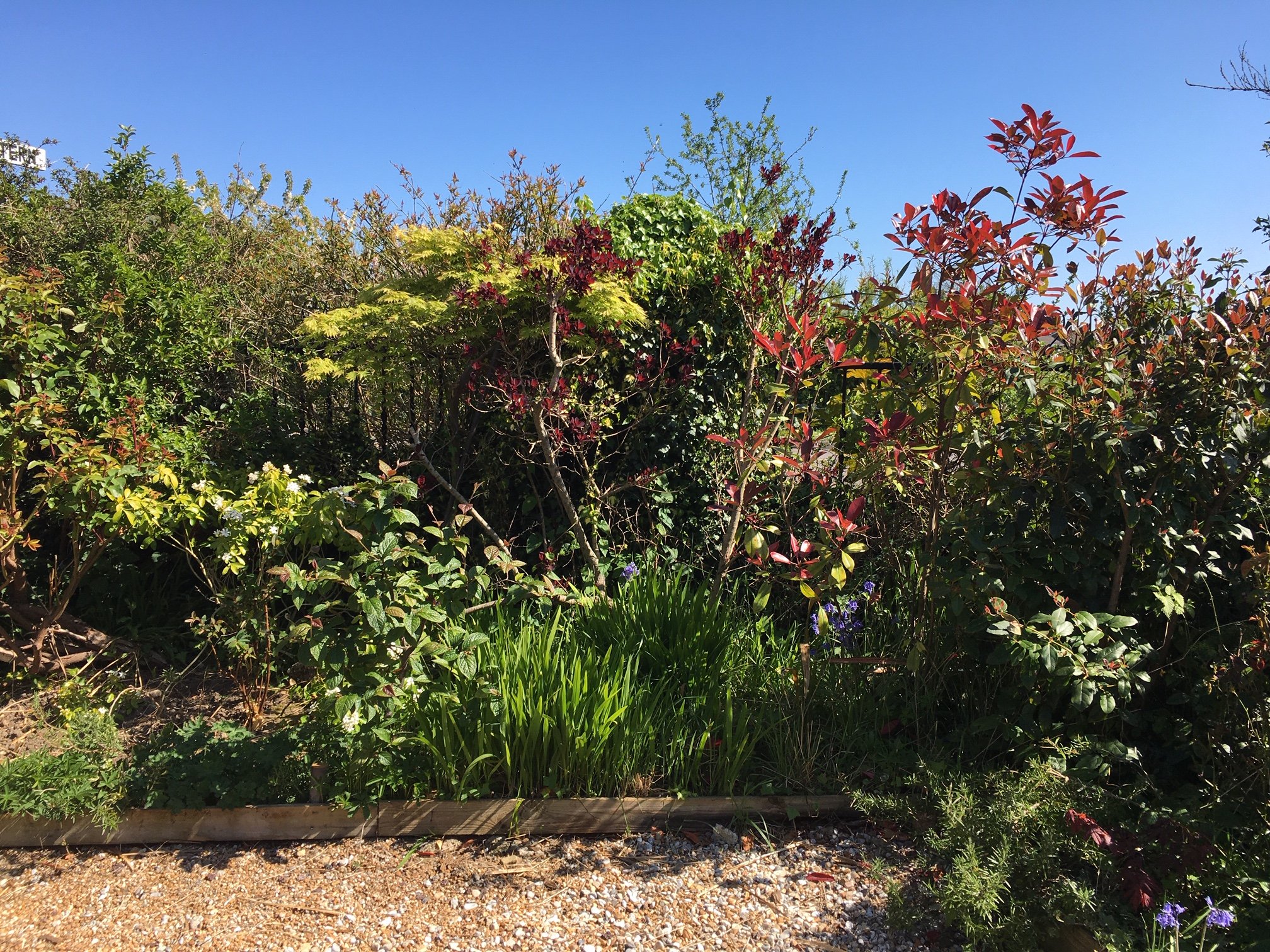 It is now the 28th of April and according to the Met Office, having had the most sunniest April on record, we now have some much needed rain and are expecting more but hopefully not too heavy so as to flatten the lovely lush new growth on the perennials!

And as April fades into May it is another busy month ahead. It is currently very windy and the sweet peas are suffering a bit, I will have to keep on eye on those, but the apple blossom is looking rather splendid. 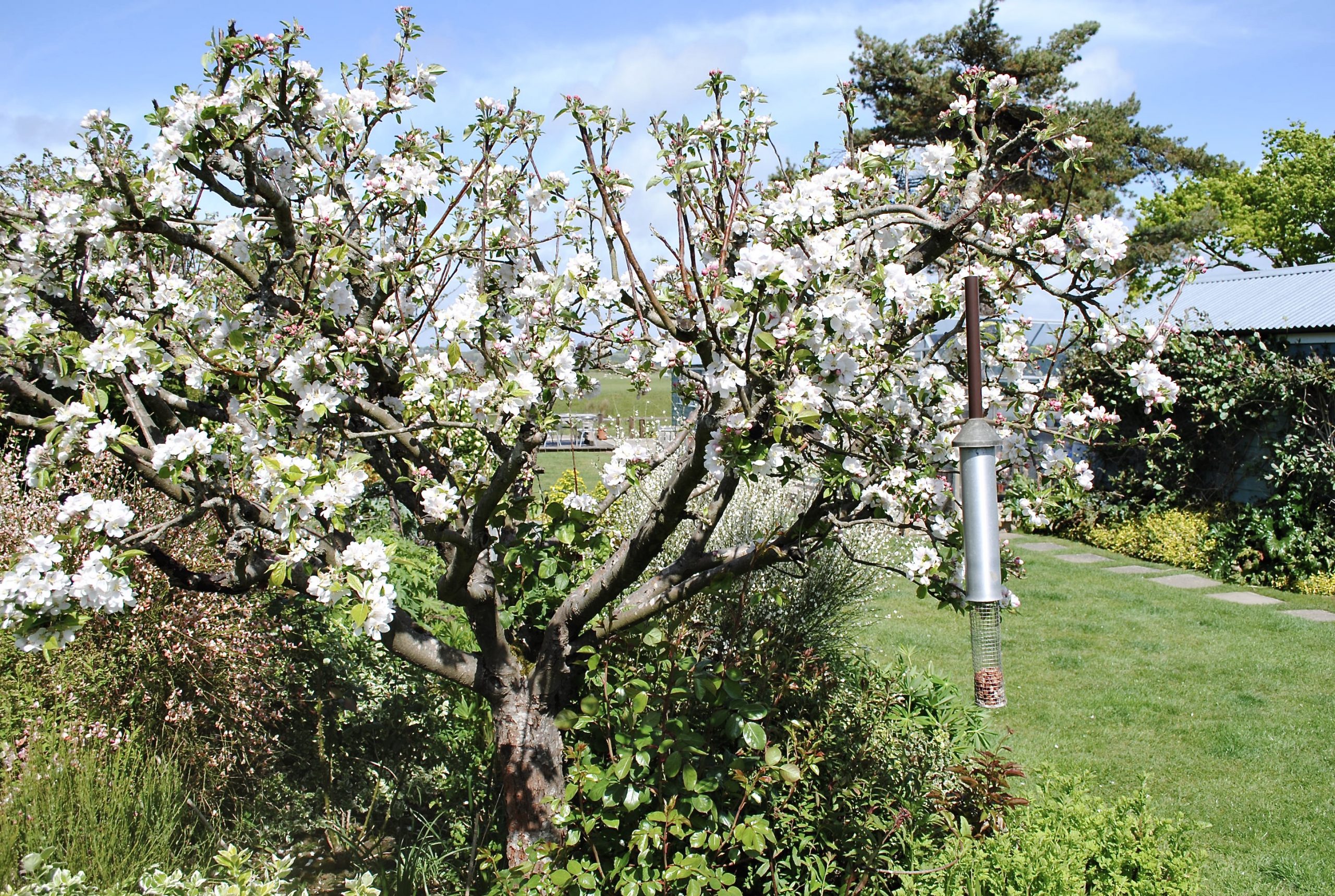 As is the honeysuckle which smells divine. 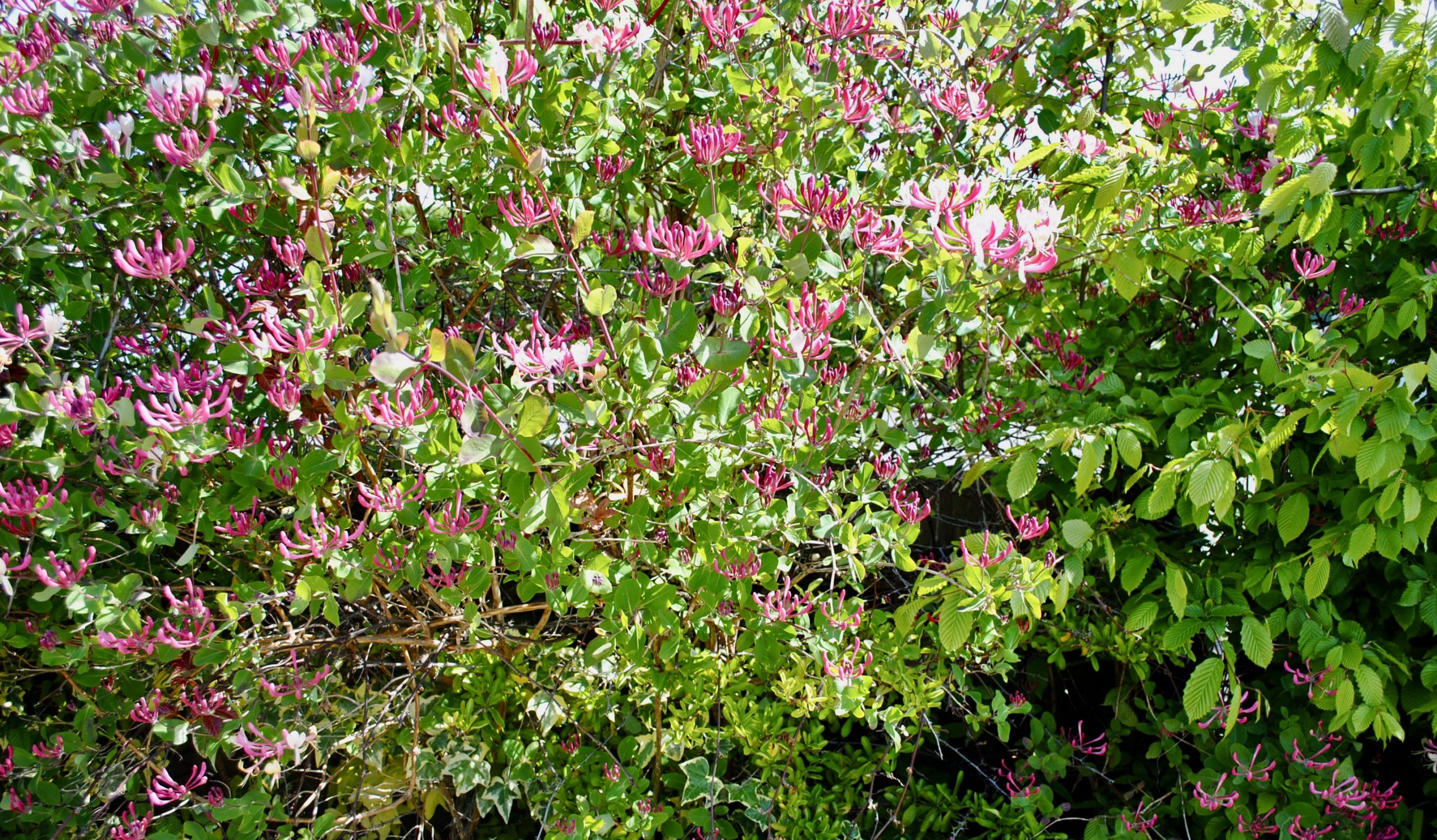 See you next month.

This website uses cookies to improve your experience while you navigate through the website. Out of these, the cookies that are categorized as necessary are stored on your browser as they are essential for the working of basic functionalities of the website. We also use third-party cookies that help us analyze and understand how you use this website. These cookies will be stored in your browser only with your consent. You also have the option to opt-out of these cookies. But opting out of some of these cookies may affect your browsing experience.
Necessary Always Enabled

Any cookies that may not be particularly necessary for the website to function and is used specifically to collect user personal data via analytics, ads, other embedded contents are termed as non-necessary cookies. It is mandatory to procure user consent prior to running these cookies on your website.