August is a month if you grow fruit and vegetables as well as flowers when you should be really reaping the benefits. It can be one of the hottest months and we have been experiencing somewhat of a heatwave so watering is essential. We did get a bit of rain at the end of last month so had some in the water butts but we have also been collecting ‘grey water’ particularly washing up water and when running the tap from hot to cold and vice versa. It is pots and any new plants/cuttings that need it most along with the tomatoes and it is important to water early morning or in the evening to prevent evaporation. The same time goes for cutting flowers too, it should not be done in the heat of the day.

It is also a time to keep deadheading to prolong flowering, cosmos is a great giver if you do it religiously. 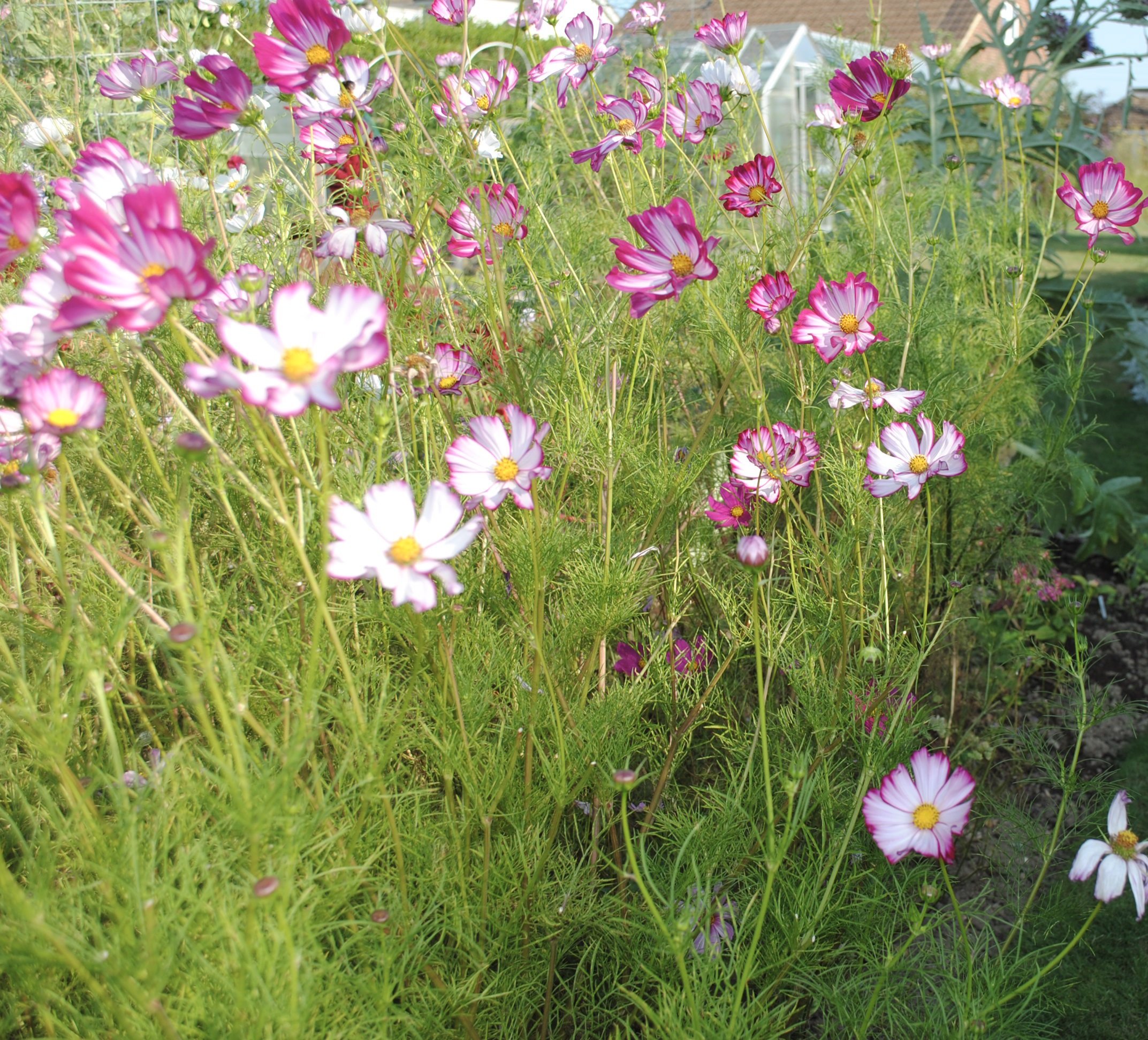 There are seeds to be collected, I recently gathered nigella and bupleurum and hoping to get some larkspur soon.

The lavender and geraniums we planted along the path have grown somewhat along with the verbena and dill self seeders. 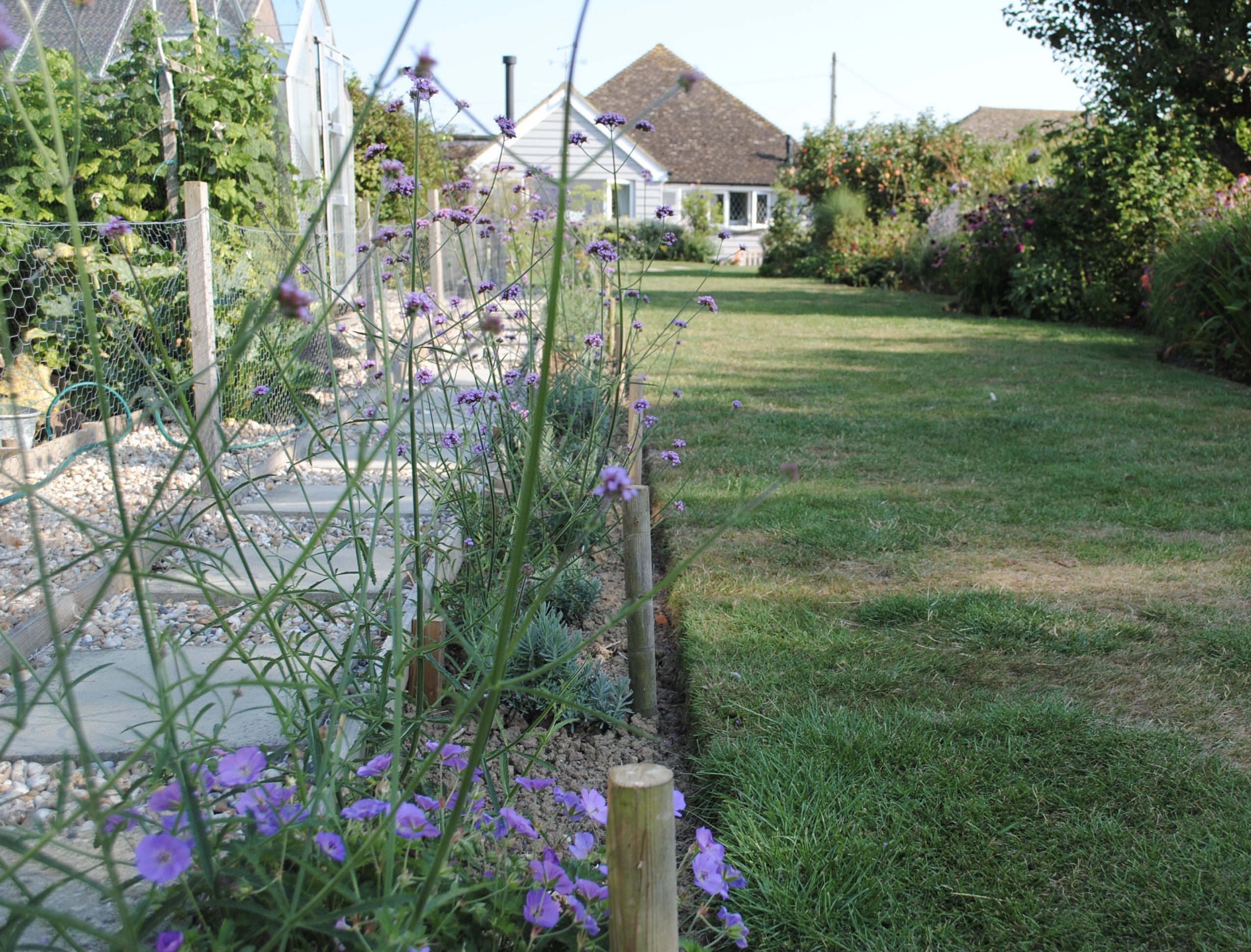 I am pleased the see the delphinium that I cut down are putting on a lot of new growth and have one actual new flower so far. 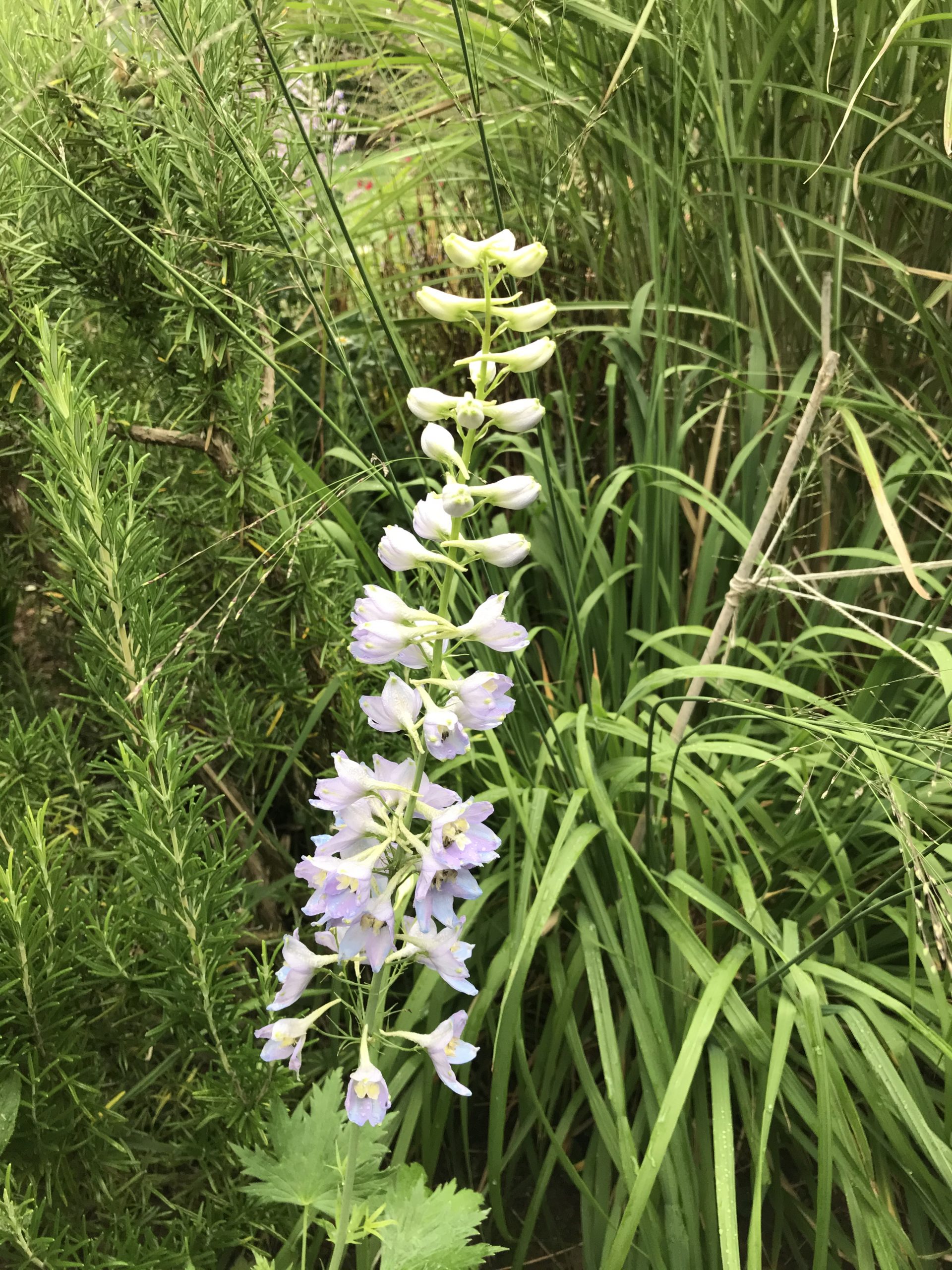 I planted more of the salvia’s in a temporary position ( 2 plants on either side of the hydrangea) rather than have them wither in pots which was a wise move given the weather. All are looking very healthy. 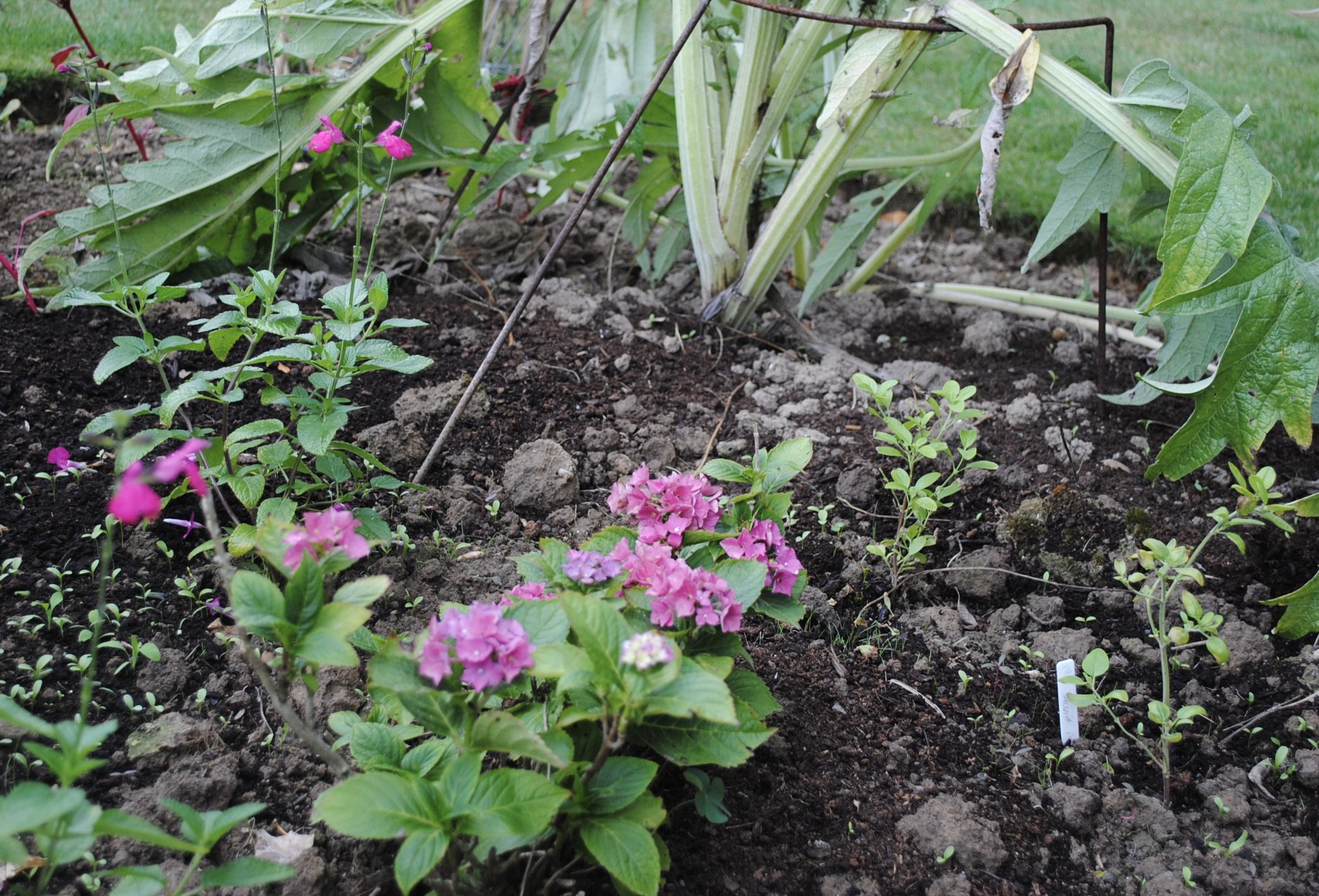 I repotted the dahlia cuttings into single pots and they have now flowered – result! 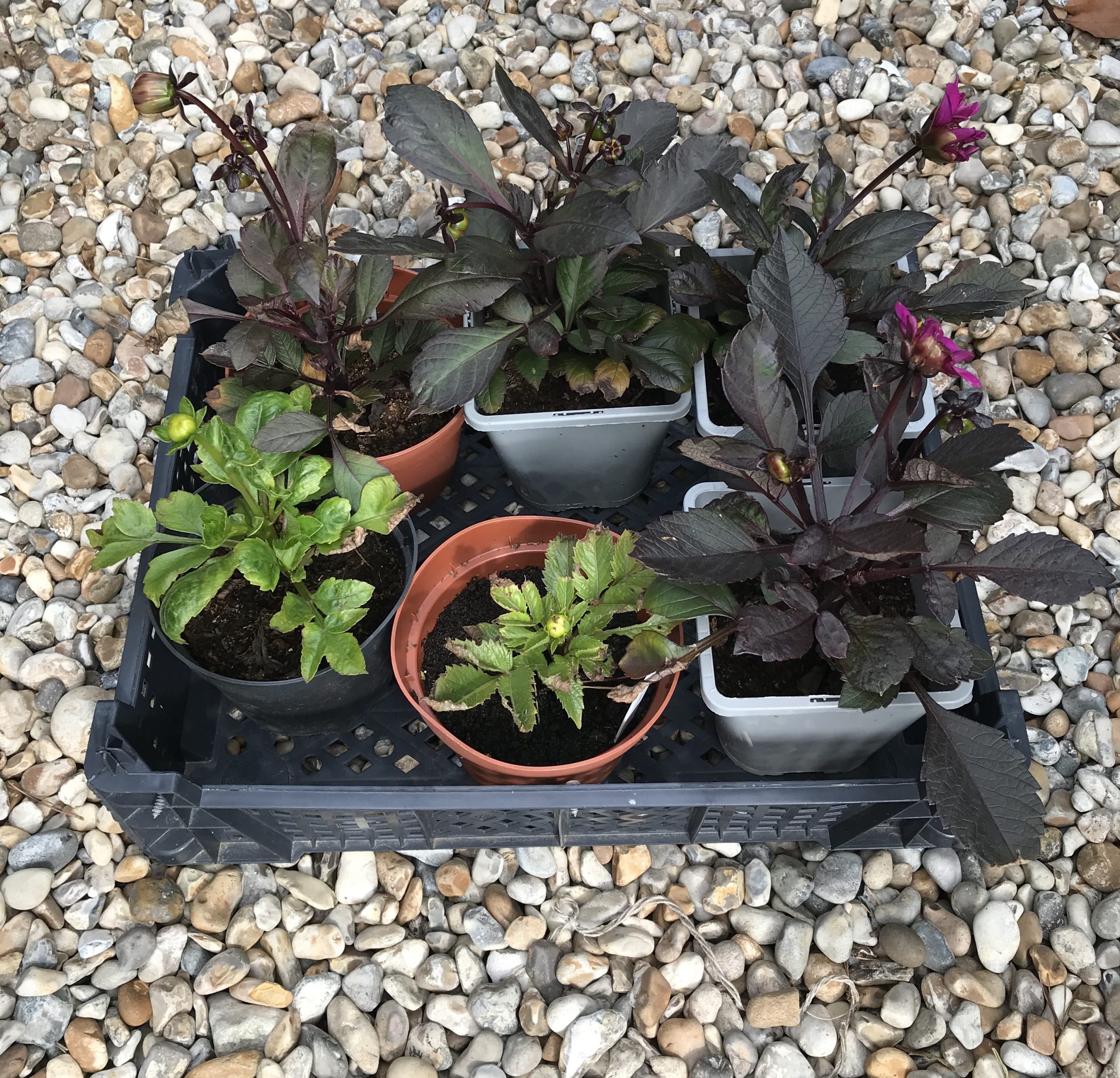 It is always so nice to see wild life in the garden. The bees are loving the artichoke and echinacea. 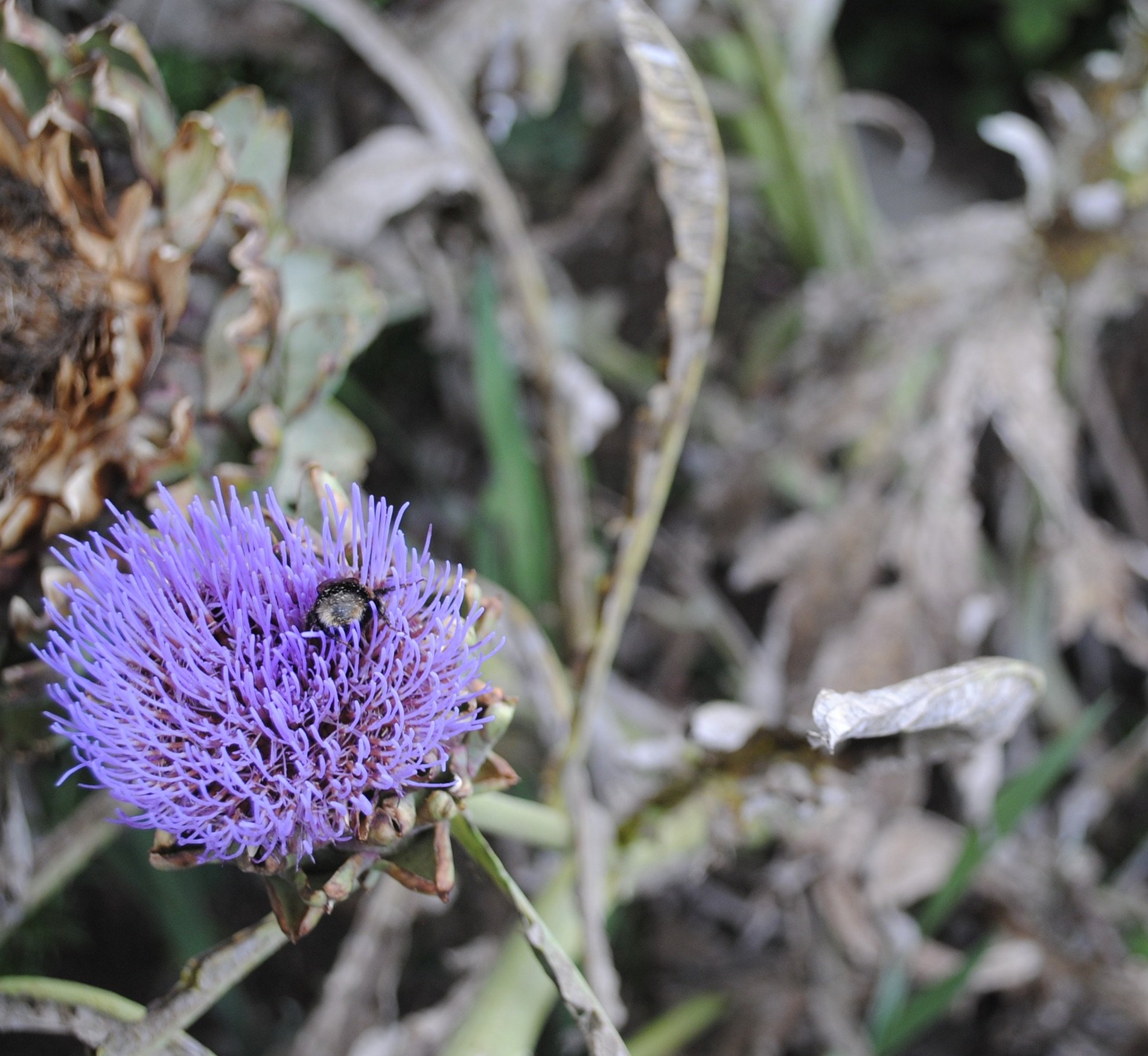 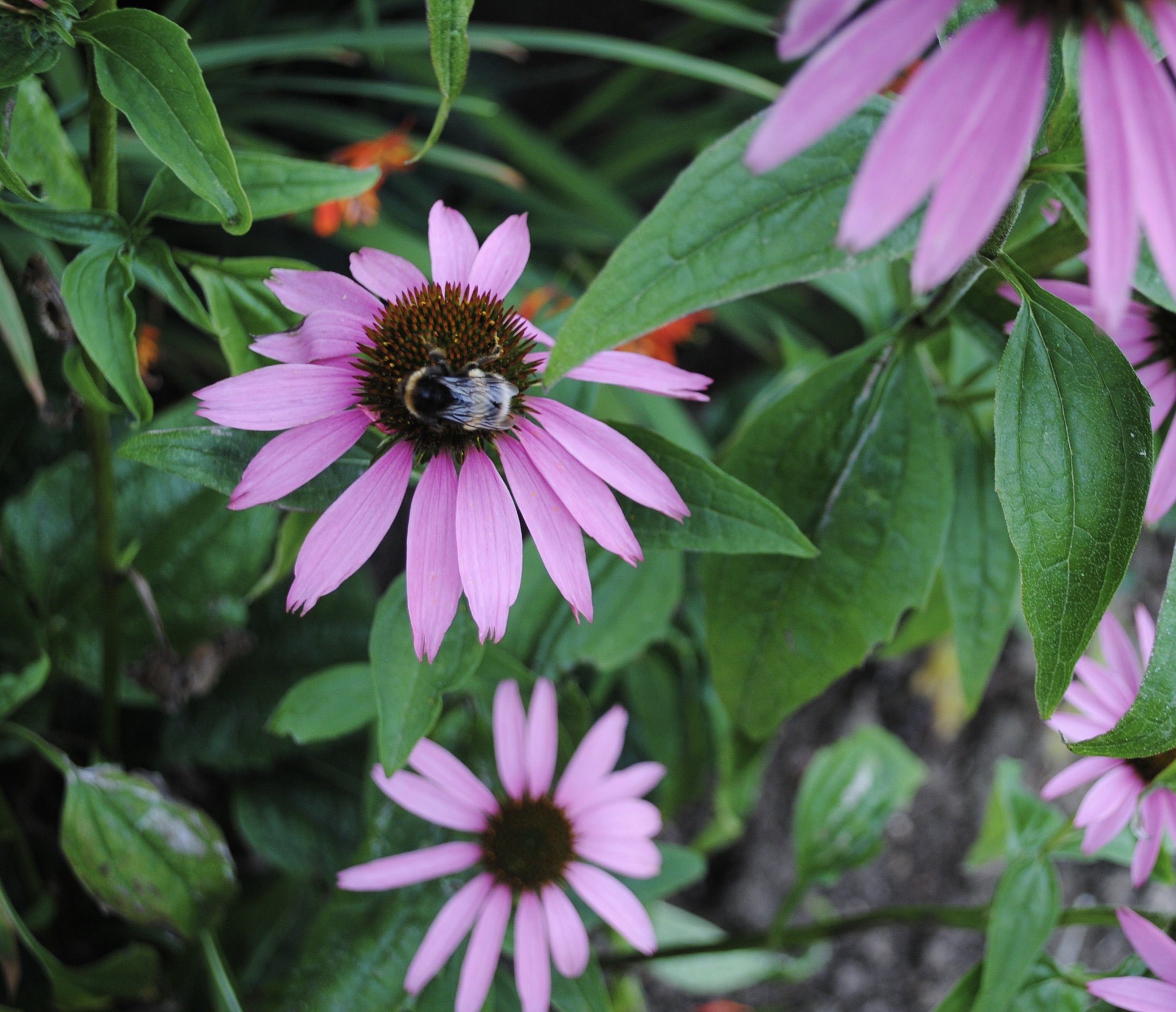 Talking of artichokes, remember the cardoon I mentioned in a previous post, well although probably past its best now it is up in the branches of the cherry tree as predicted. 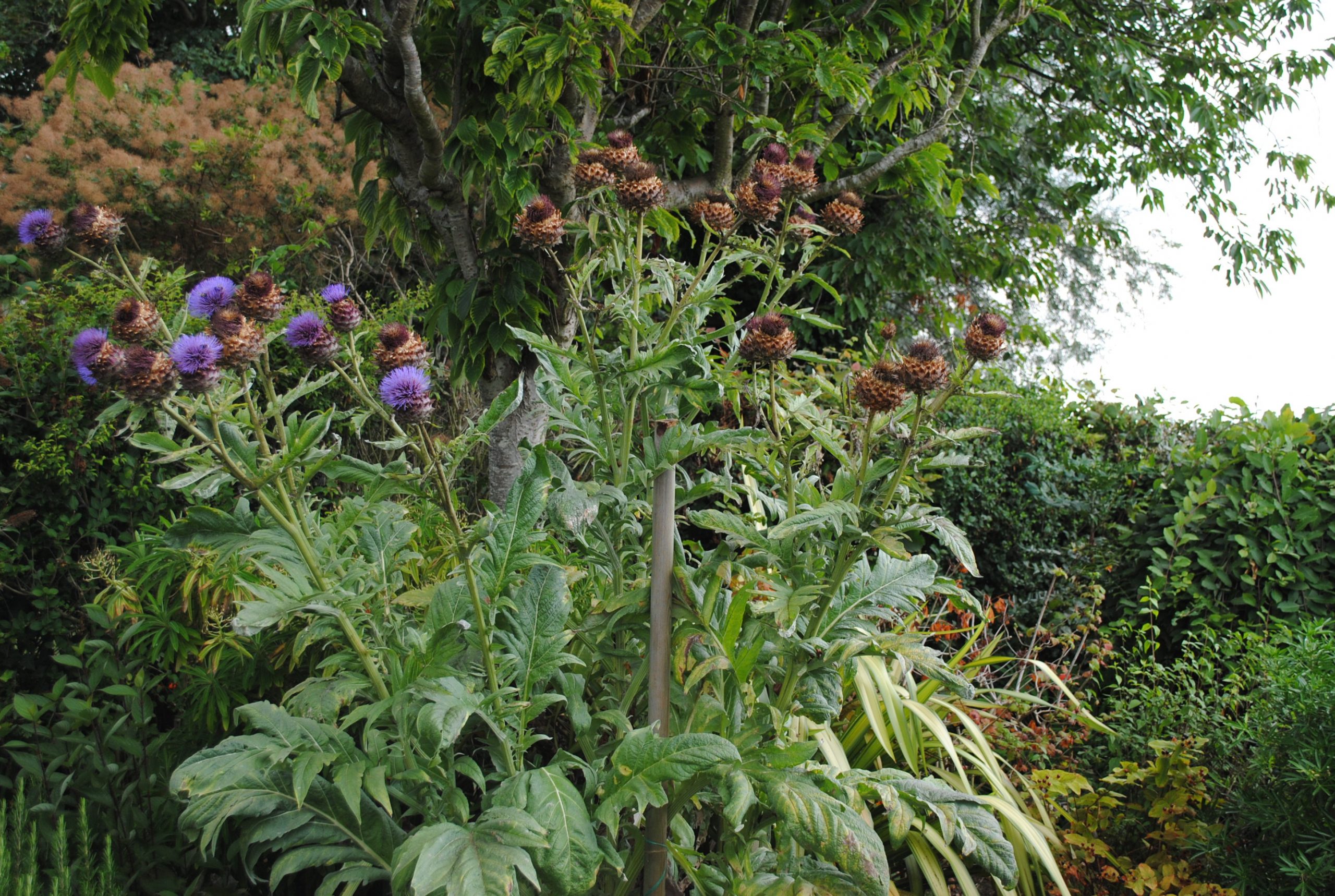 Wild life is important to us and living on the river probably means we get to see more than in previous gardens and I have not really given much of an insight to our lovely location. There has been the grass snake basking on the deck, the flash of a king fisher speeding along the water surface, moorhens, and the mallards and swans being daily visitors at the moment. We frequently see herons and cormorants too. 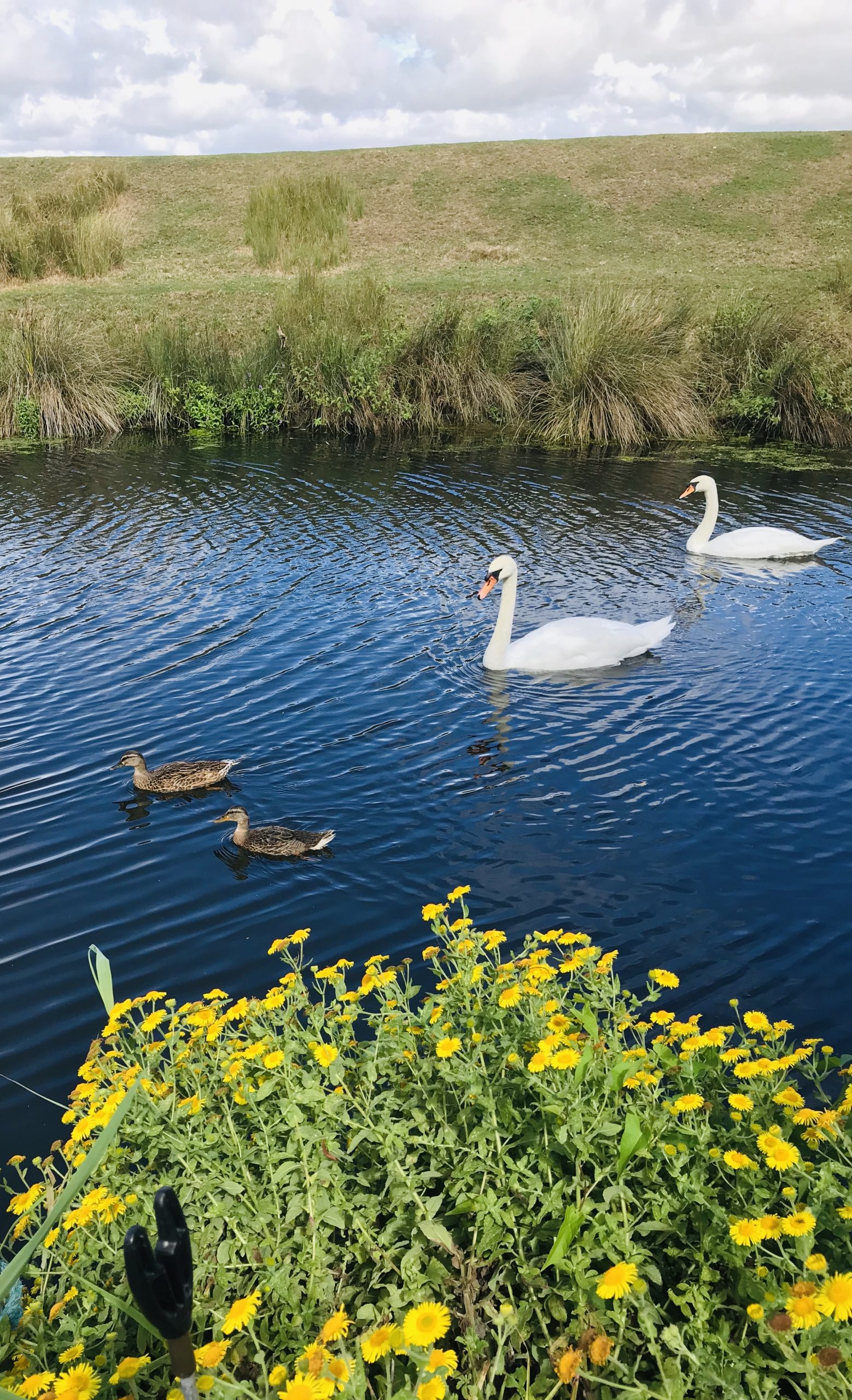 And of course the fish – tench, roach, dace, carp, mullet (but they do not hang about to be caught, much to hubby and our son’s annoyance) We recently saw a stoat, the sheep are great neighbours but I have my reservations about the gulls as they are prone to stealing ducklings and make so much noise! 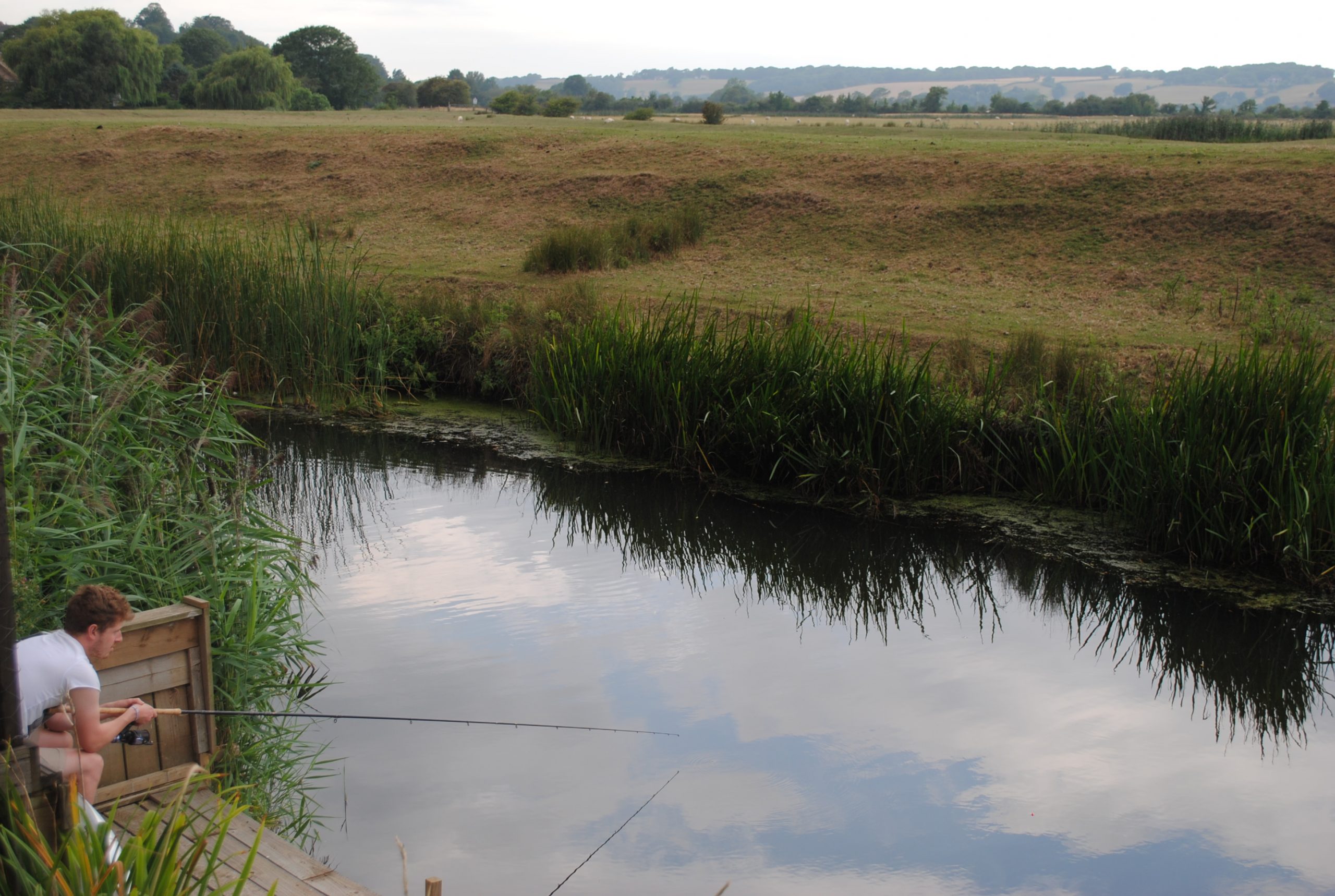 We have had at last had some rain which has been a relief for us as well as the garden. It makes such a difference to how everything looks. However I think the hibiscus has really enjoyed the recent conditions as I have not seen it flower this well before. 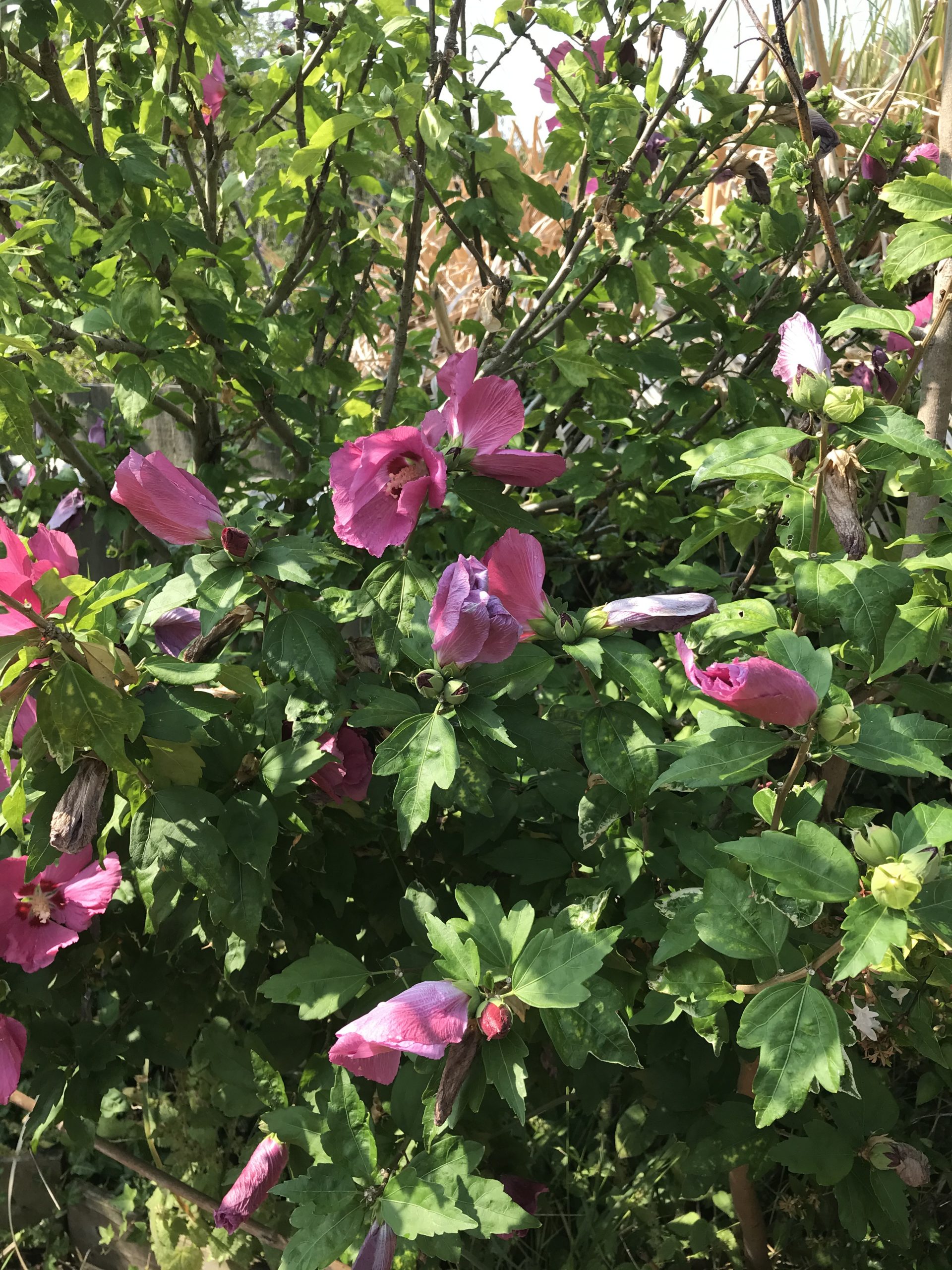 We have not had to worry about holidays this year due to the pesky corona virus but for gardeners when to take them can be a problem. It was in fact a topic discussed on Gardeners Question Time recently. The panel concluded that there was never a good time other than maybe January or February. We in fact tend to go May and/or September as we like to enjoy any summer we get here.  May can be tricky as if you grow annuals from seed as it is the month a lot of them need planting out and it will depend on how cold or warm spring has been as to what stage they are at.

We are now half way through August and have had another virtual treat with Flowers From The Farm Flower Farmers Big Weekend. It is usually a time when members open up their farms and cutting gardens to welcome in the public but this year many made video’s of their plots to share tips and advise. I watched a number and learnt lots, just need to put it into action! We have a local member who I use quite a bit – Orchard Farm Flowers and they have lovely dahlia’s at the moment. If only mine looked like that! 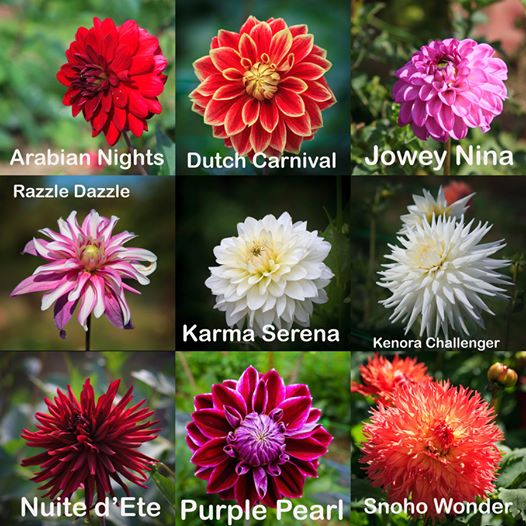 August is also a time for cutting back, I have already cut some of the hardy geraniums back in the hope of a second flush along with the alchemilla mollis and feverfew, the latter having already produced new flower stems. The spirea japonica needs dead heading and the lavenders need trimming back too.

I always think of Symphoricarpos or ‘snowberry’ as a winter shrub but it is actually a late summer one as you can see below it is in full leave with its little white, tinged with pink berries. It is a shrub I love using in my work. 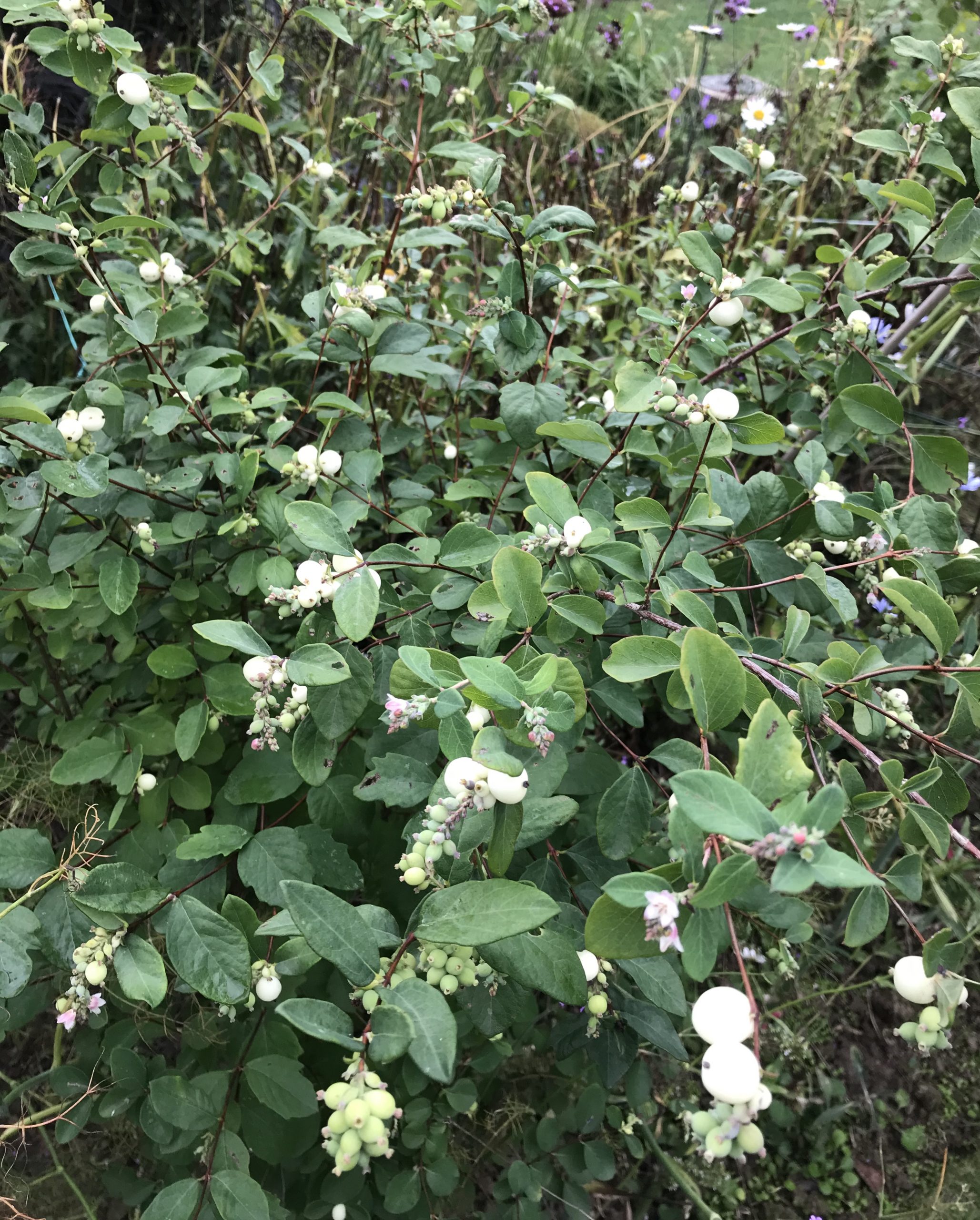 We have had incredibly high winds the last few days but fortunately there does not appear to be too much damage, a few more windfall apples and a couple of broken cosmos stems.

We are now in the last week of August and I feel summer is fading, the nights are pulling in and there is a nip in the air. The cosmos although I am regularly deadheading and there are still flowers and buds, it does look tired with some stems turning quite brown. It looks as though we will have quite a lot of rain in the next couple of days which may damage blooms. We still have the rudbeckia, echinacea, zinnias and the michaelmas daisy is coming into flower. Below is the white one and we have a very pretty pale pink with dark foliage which is yet to come out. 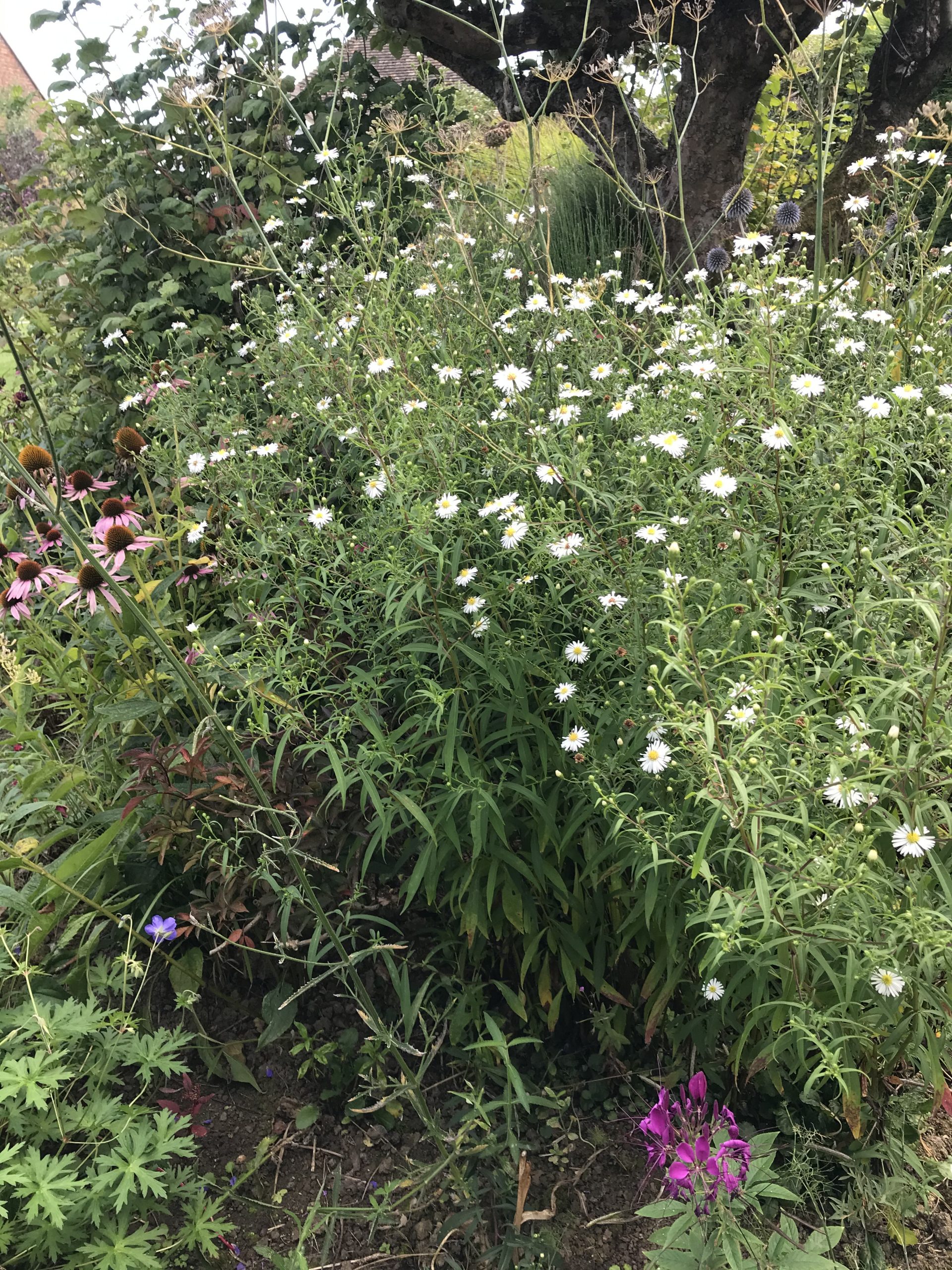 The helenium has not done well this year. Previous years I have struggled to get both arms round the clumps to tie supports to them but this year we only have a few weedy stems. I am going to dig it up, divide it and re plant with some feed and hope it revitalises. It may not recover and we will have to plant something else.  Many plants do not go on forever and need replacing, another example of why a garden is ever evolving.

Official with it being the end of August, summer is now over but the garden continues to produce flowers, fruit and veg. Here is this months bunch which shows the change in seasons with the richer colours of the amaranthus, cosmos, zinnia, rose, echinacea, dill and grasses. 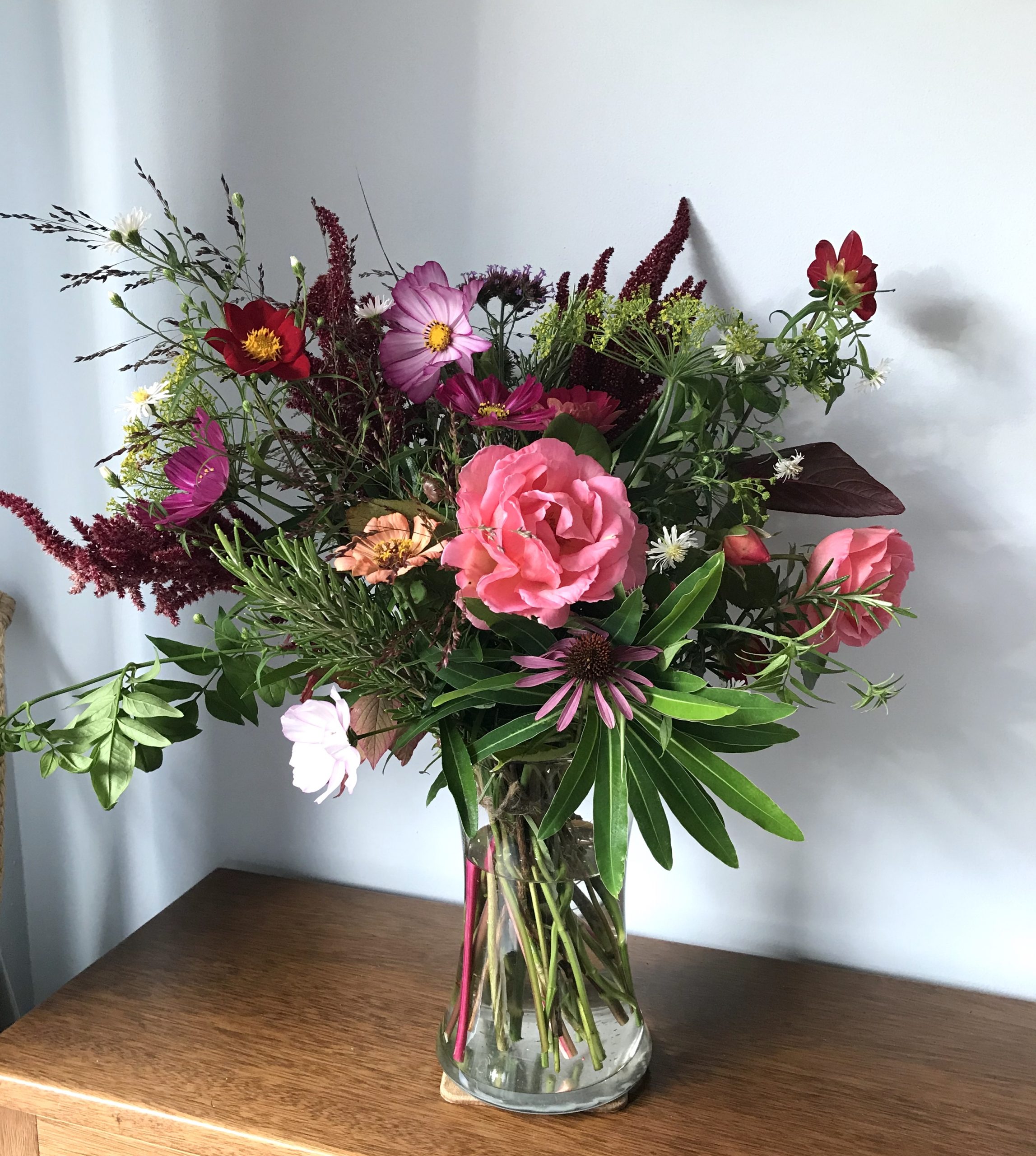