So this is how the garden looked on the 2nd of July. It is lacking a bit of colour now the delphiniums and lupins have gone over as we await the zinnia’s, echinacea, dahlia’s and rudbeckia.

But the the larkspur is looking good in the cutting bed. 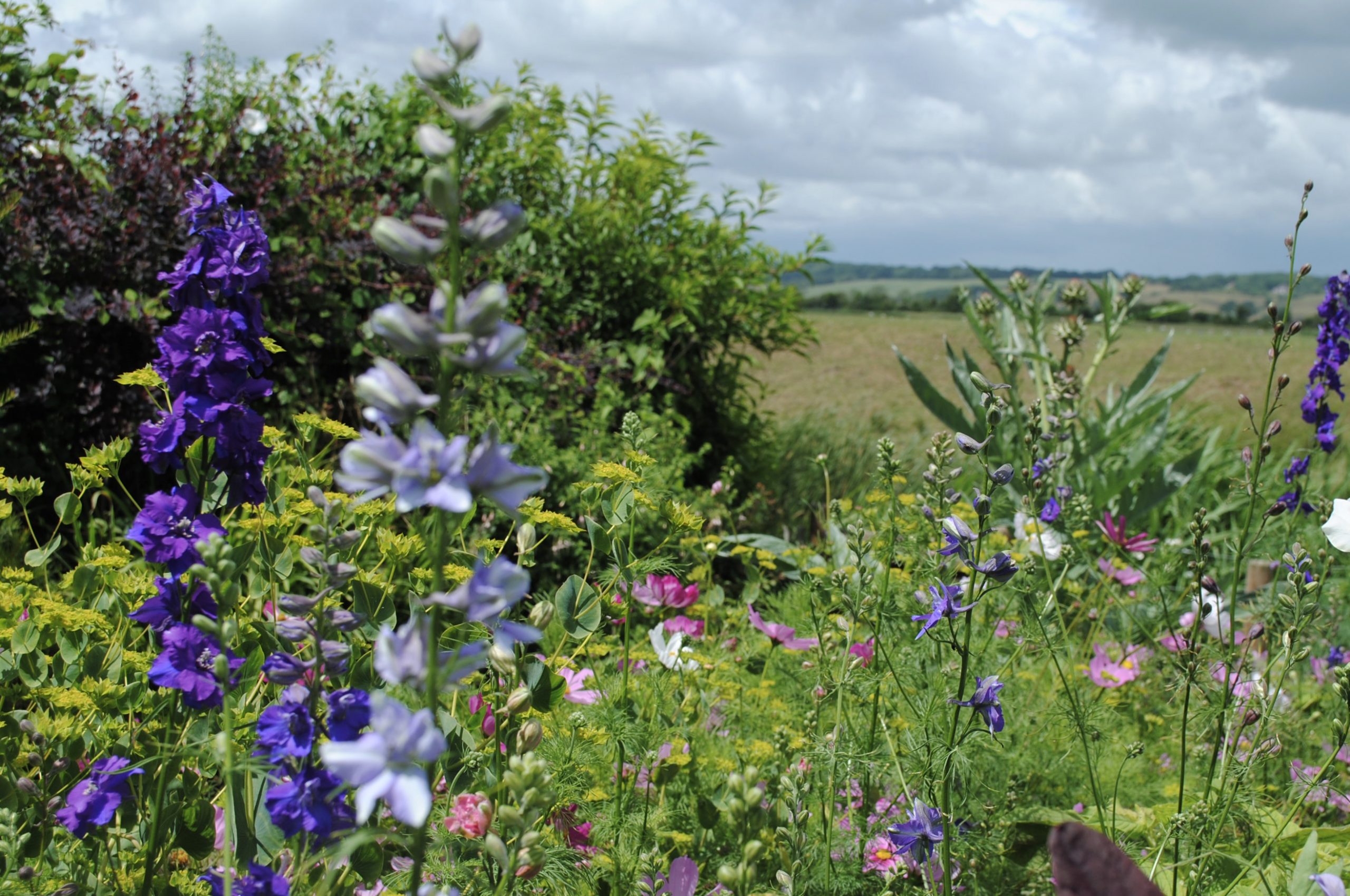 The month has started with varied weather but wind being pretty much constant! It does mean the showers do not hang about too long but is not ideal especially when you are trying to net raspberries to stop the pesky pigeons from stealing them! But we managed it! 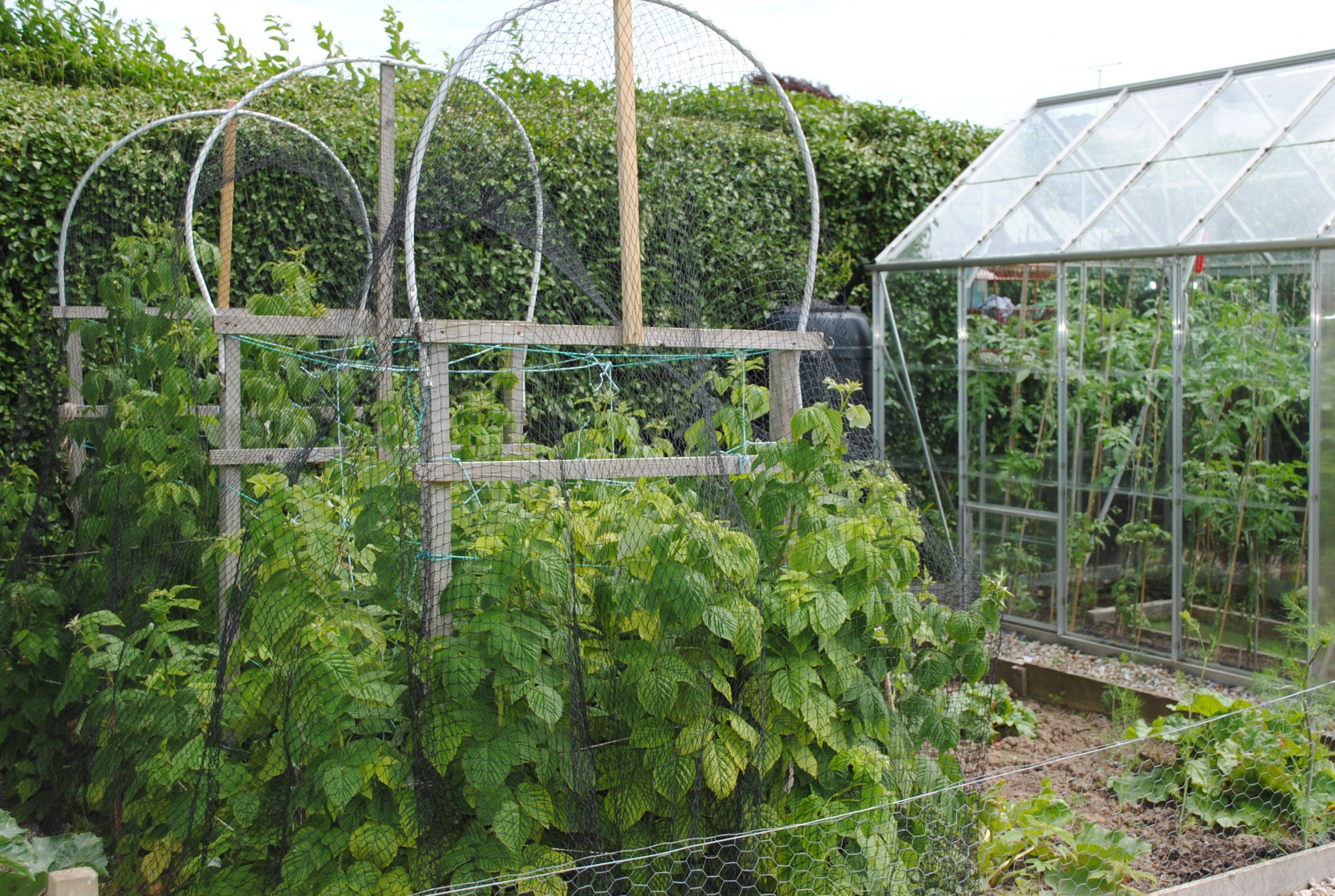 I have cut all the delphinium down, as per Monty Dons advise! They should hopefully give a second showing later in the year so for now we have planted some of the amaranthus we raised from seed. Being left in pots they are way behind the ones in the cutting bed but they should put a spurt on in the open ground.

I am very pleased with the the clematis durandii this year. It is its second year and has quite a few stems. Unlike a lot of clematis as you can see it has quite long stems which are ideal for using in bunches. I use a lot of clematis in my work so was determined to grow this variety. More are planned for next year as they give height and interest for quite a few weeks. 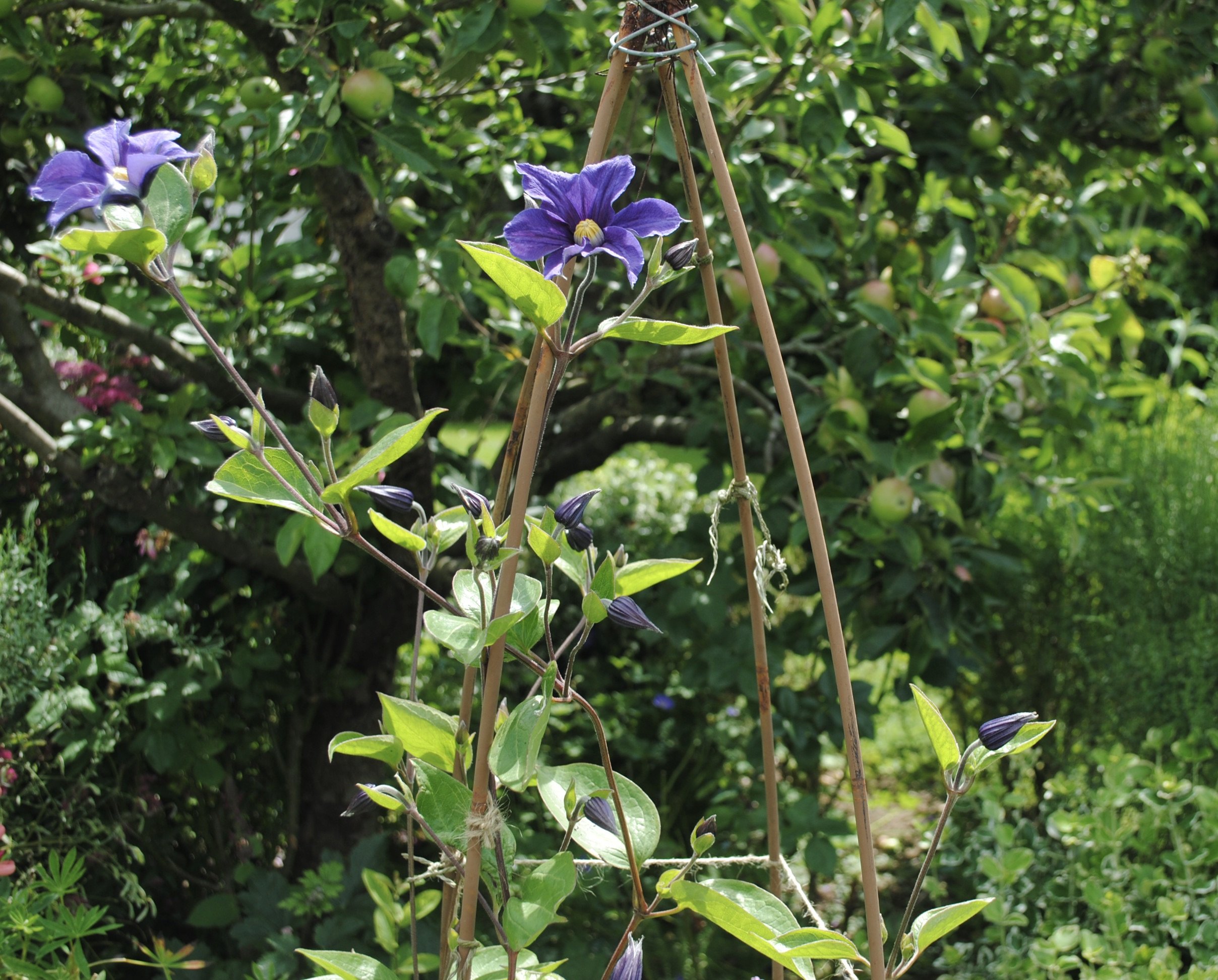 I also bought some achillea to fill in some gaps and being a perennial it is money well spent for colour this season and future years. 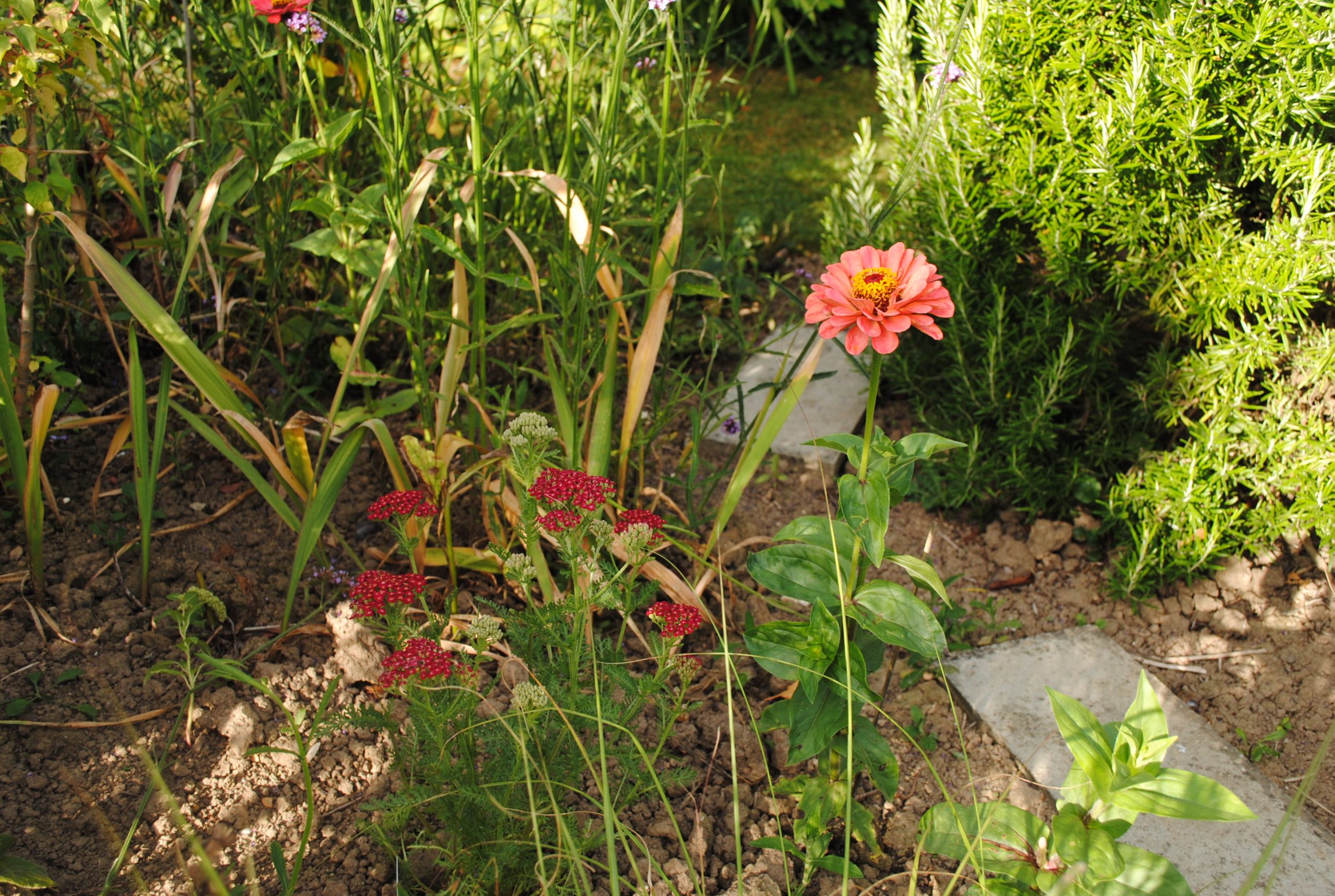 The echinacea are staring to putting on a lovely show with many more flowers to come. 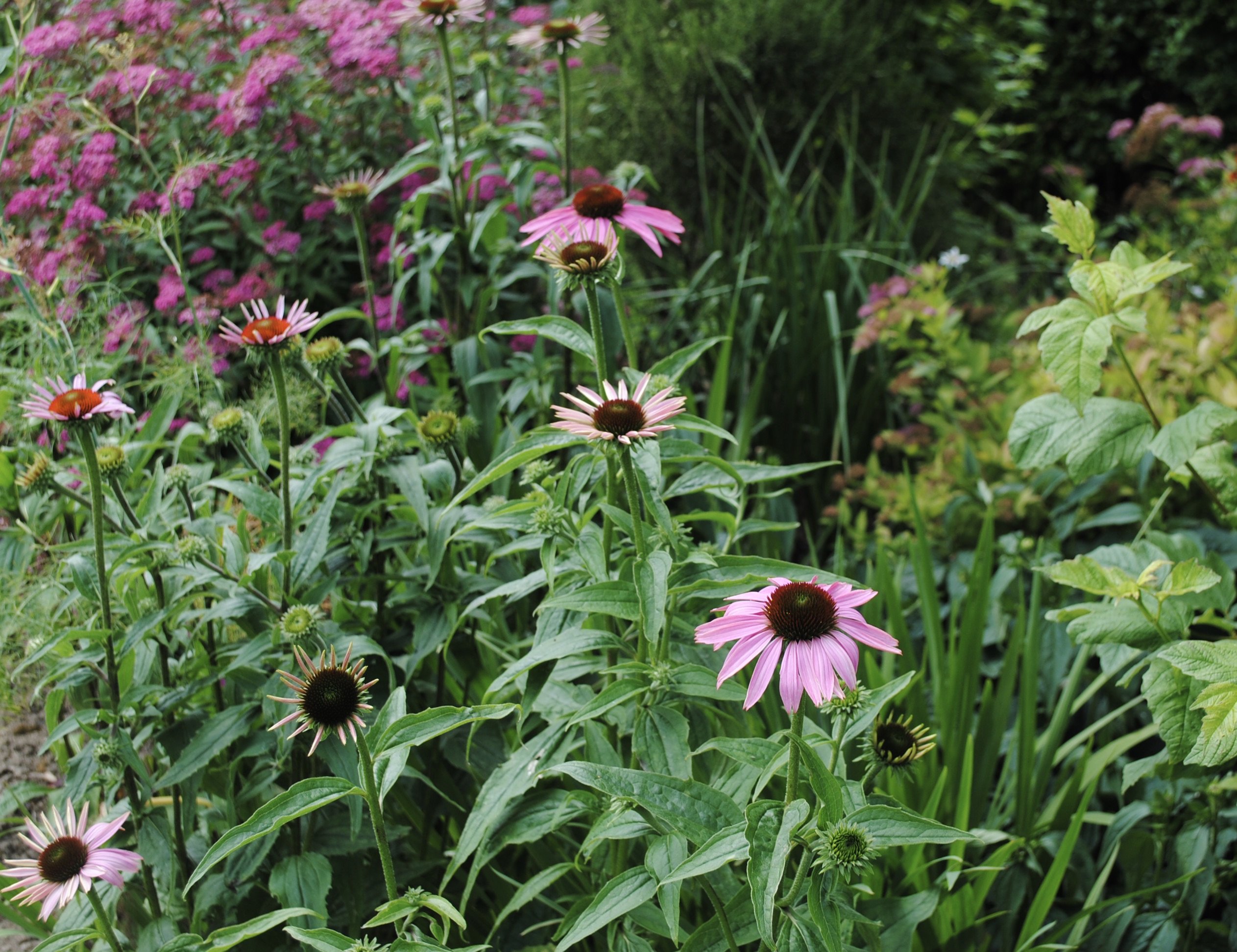 The zinnia’s are performing well too and are an excellent example of how pinching out works. I did a bit of an experiment by leaving some with the central flower in which are in bloom now and others where I pinched it out. You can see from the photo below how those are shorter at the moment but have more flower buds so this method produces more flowers and allows for a longer, staggered flowering season. 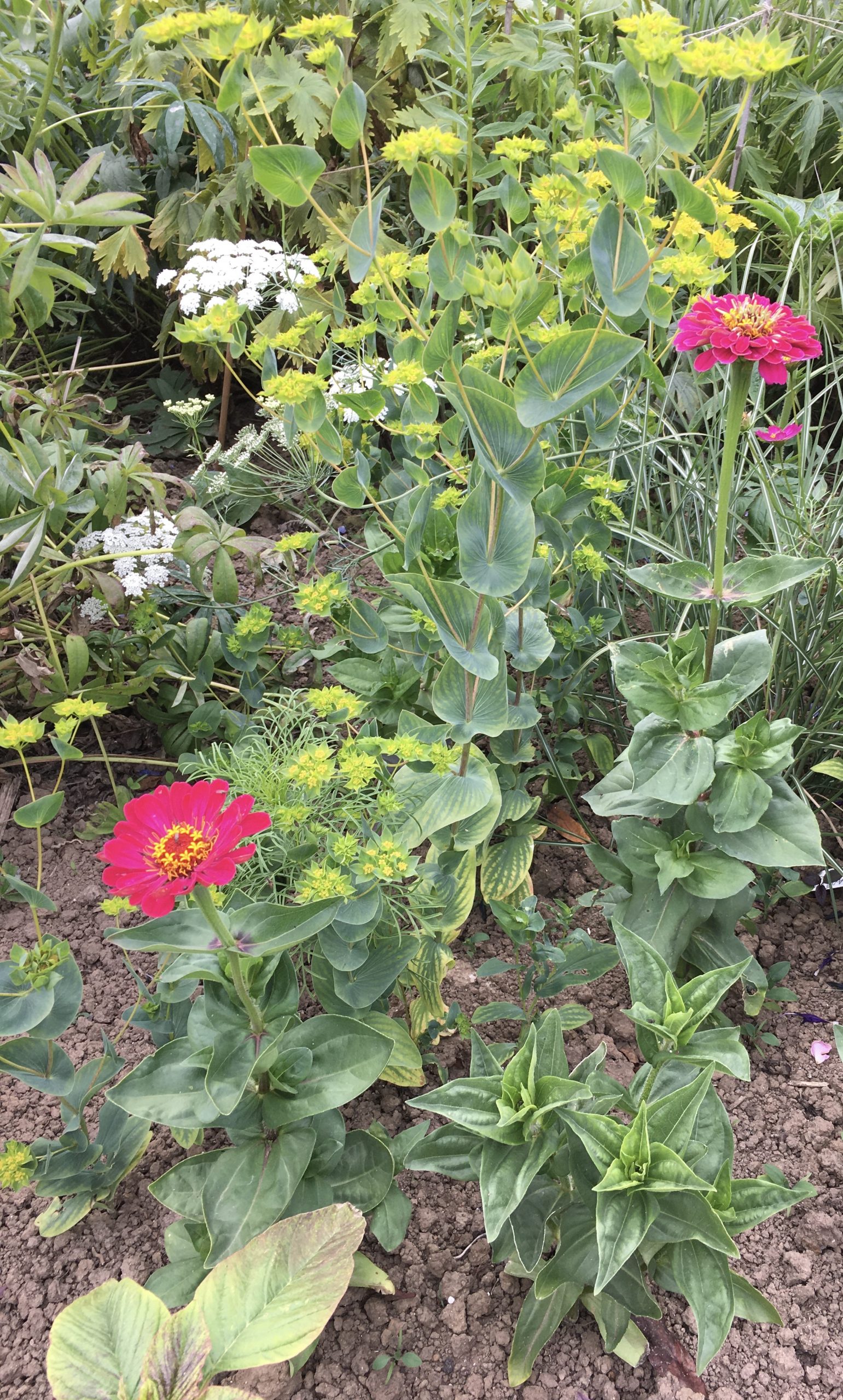 The salvia cuttings have been a great success, well in their pots, I have now planted one in the boarder to see how it fairs. It in fact fills a space where I removed a Russian Sage or Perovskia which was being eaten and nearly destroyed. We bought three a couple of years ago, one is doing great as you can see below but the other two had to be rescued and potted up until I thought they were strong enough to go back in the boarder, clearly that was not the case. 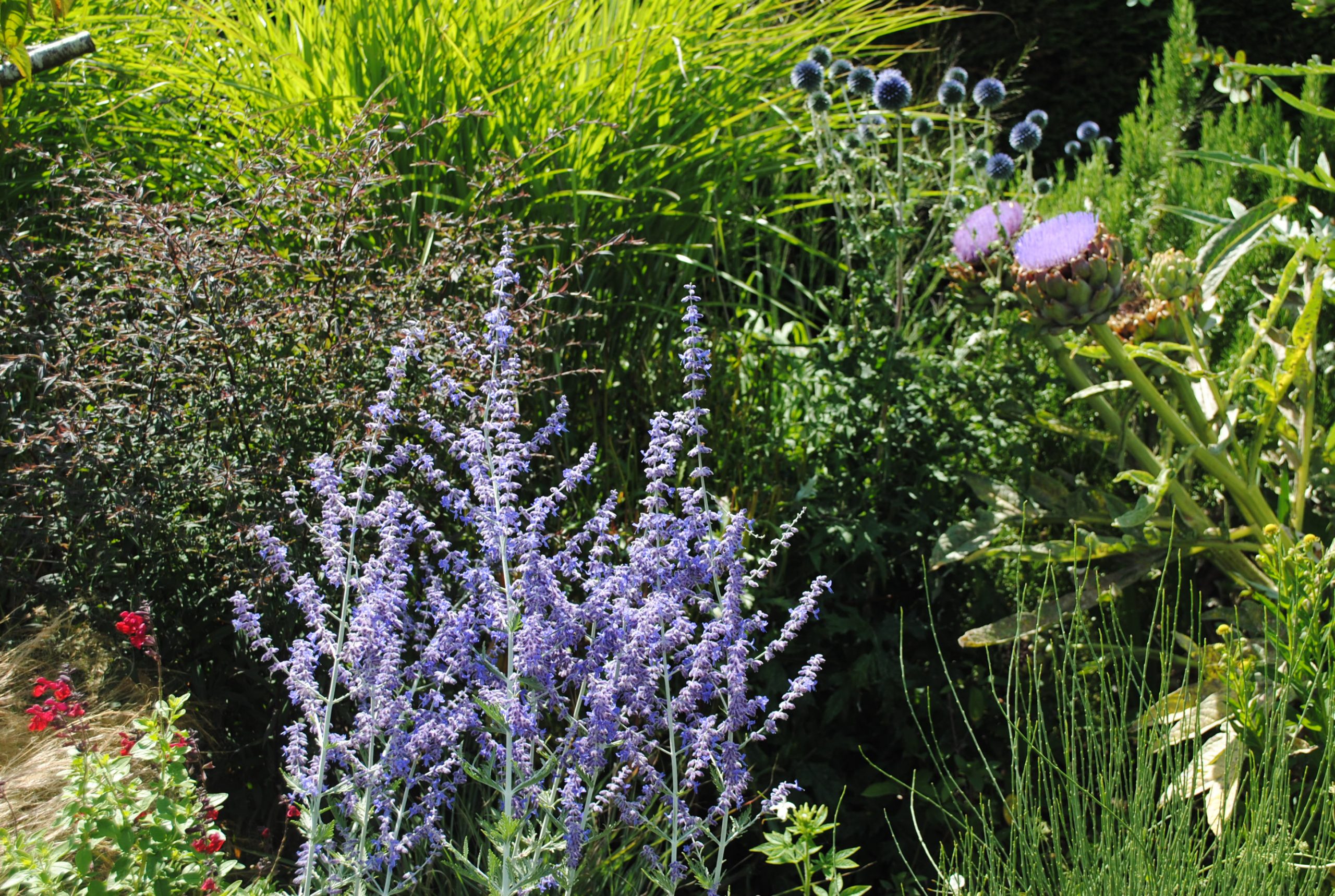 We have loads of apples on one of our trees, a nice dessert apple but the other two are bare so no Bramleys this year. It has to be down to the pruning so we need to double check that for next year. 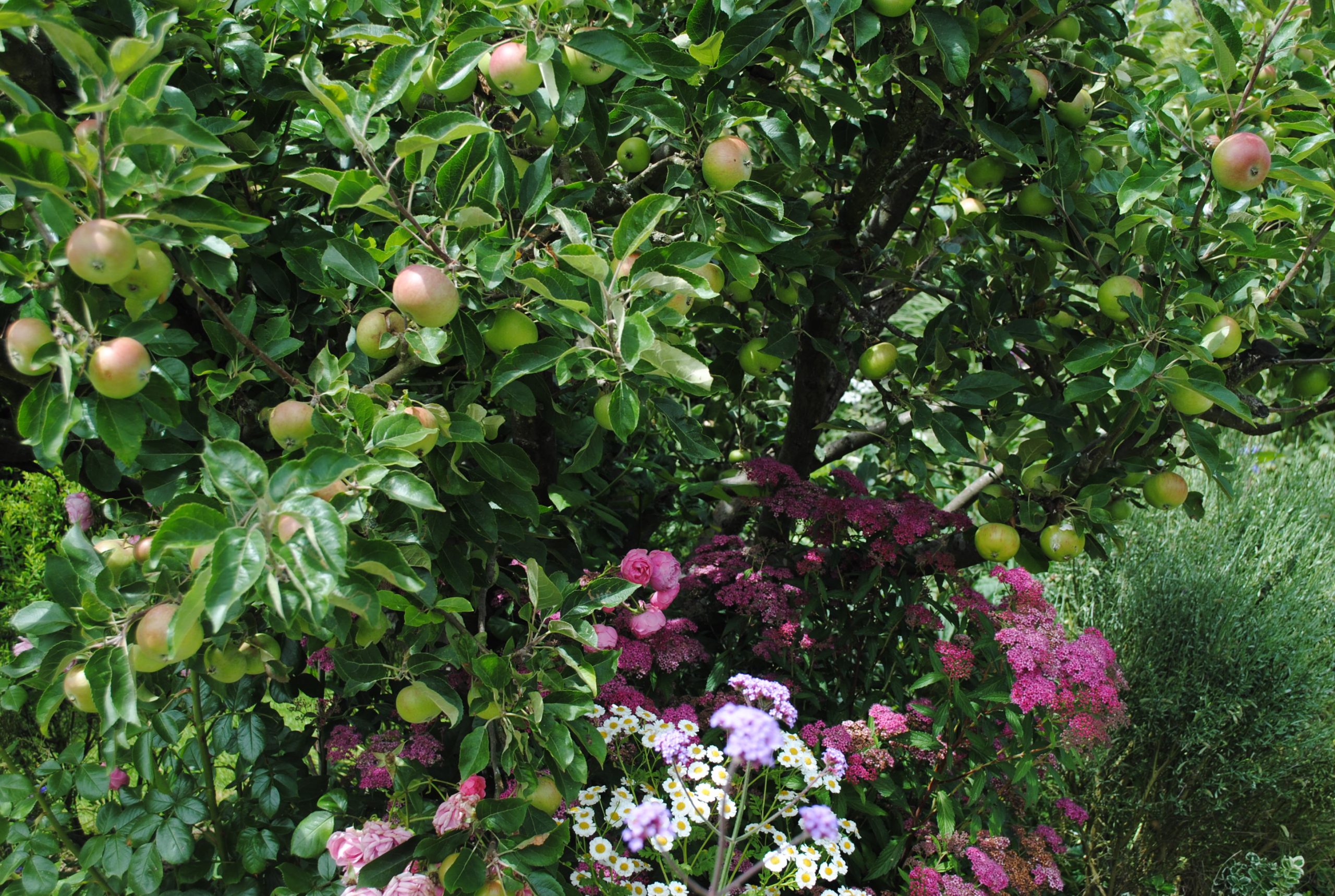 We had a good rain yesterday, excellent timing for those amaranthus and achillea that have just been planted.

We are getting more or less daily pickings of raspberries and tomatoes now. 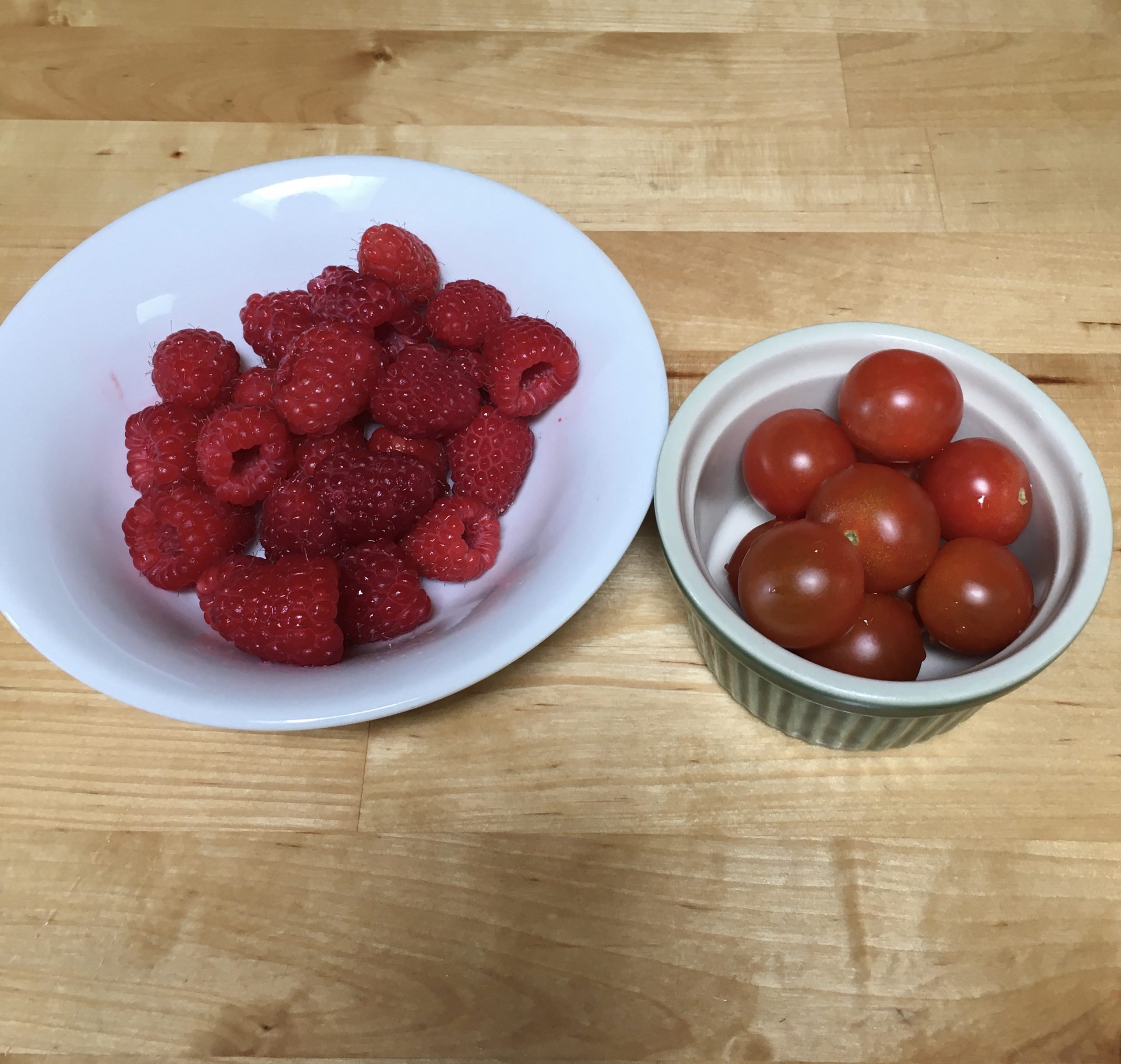 The basil continues to romp away in the greenhouse, great for pesto. And whilst hubby was a bit disappointed that only one courgette plant germinated it is in fact producing so many that we would have been overwhelmed if we had more.

There is so much coming into flower now, although I am a little disappointed with the height of this dahlia – I really must try to find the labels and learn their names! 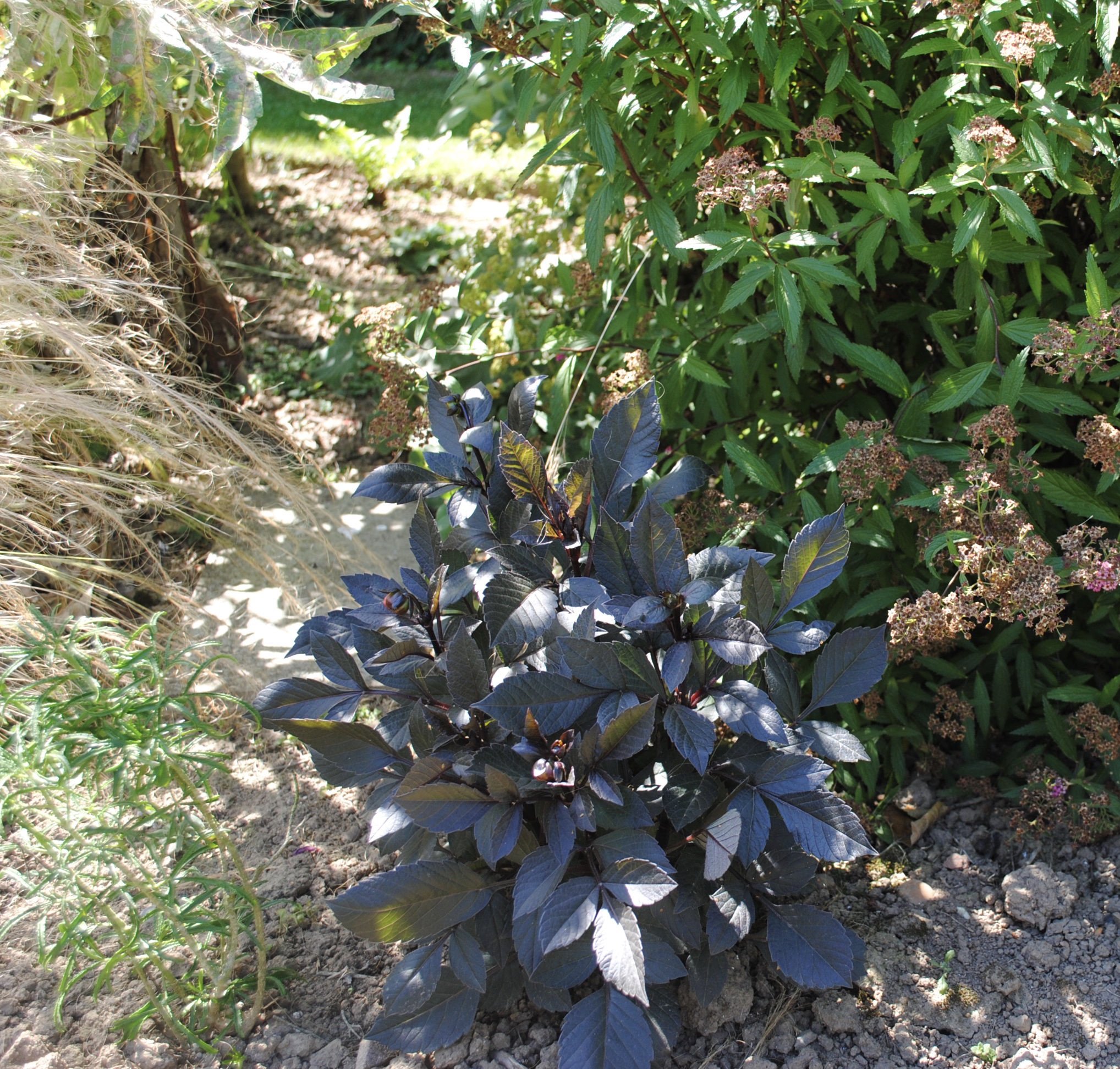 But the single flower red and magenta pompom ones are great. 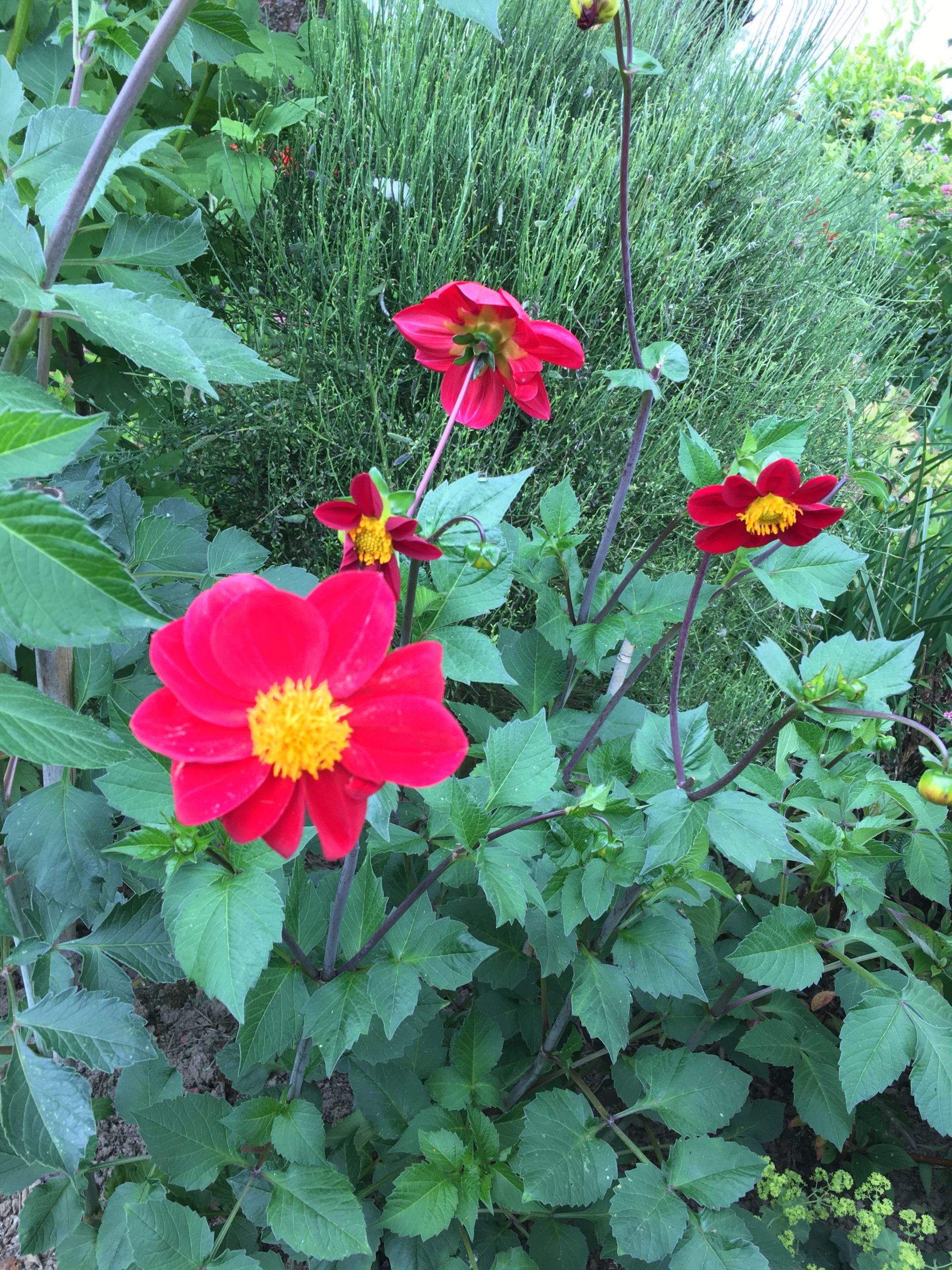 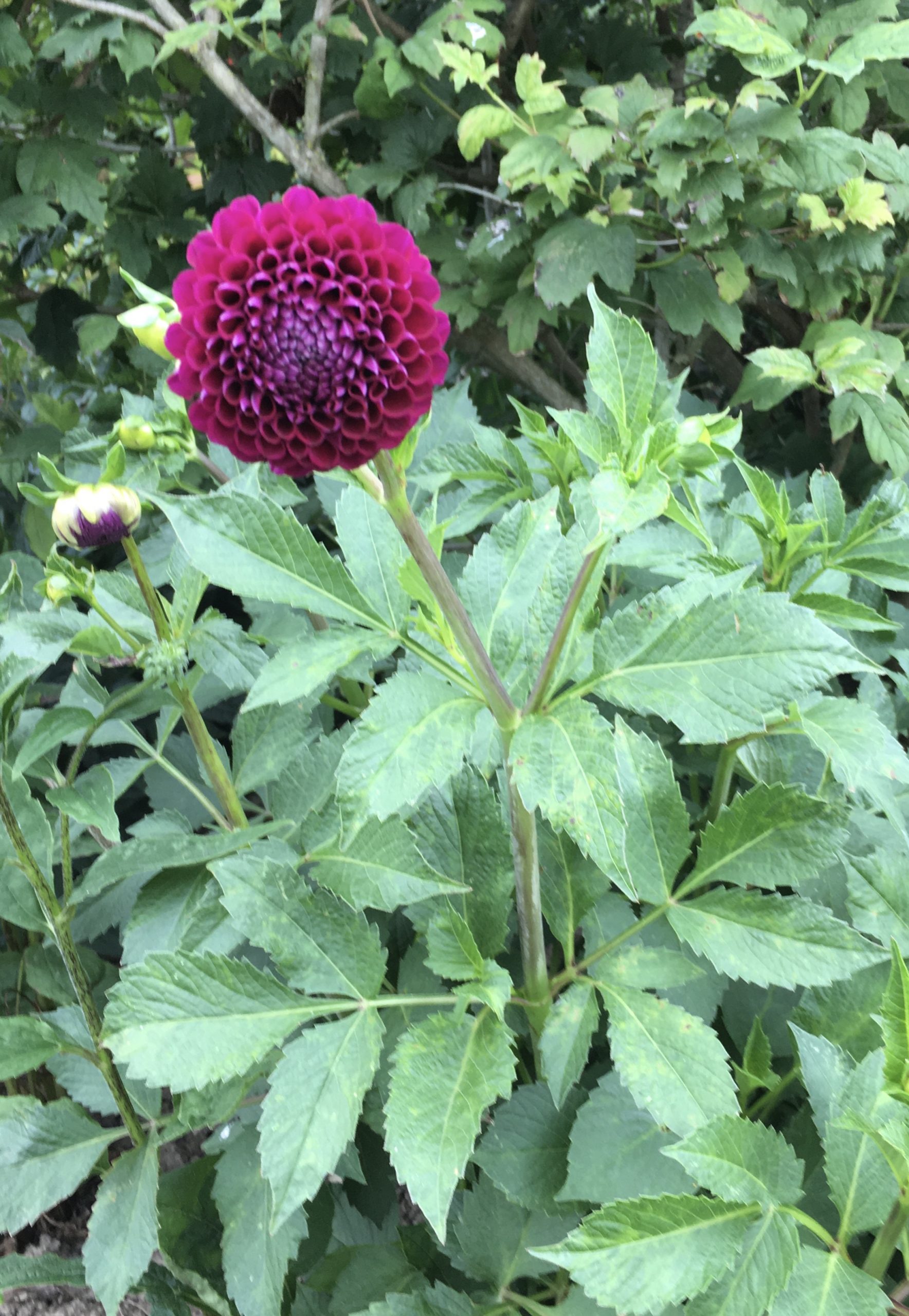 And we still have the Cafe au Lait to look forward to.

Hopefully the image below shows the colour I was trying to achieve in the middle part of the boarder, vibrant summer colours provided by echinacea, kniphofia, spirea, crocosmia and the yellow bud of the rudbeckia just staring to show. 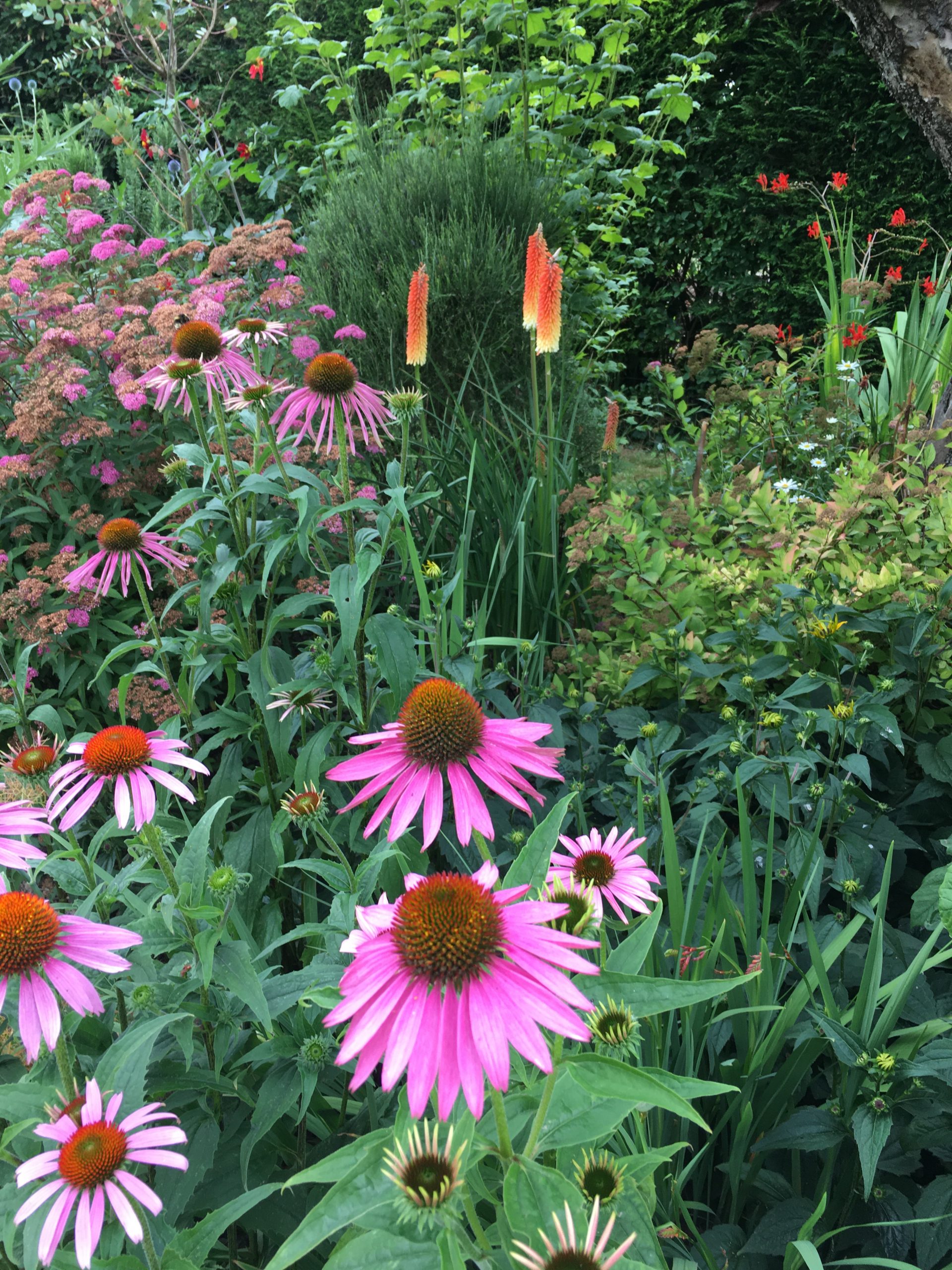 The pots of agapanthus are always a joy. They need very little attention and come up year after year although there is one pot we have had for nearly 20 years and the flowers are getting less and less so that definitely needs splitting and re potting. 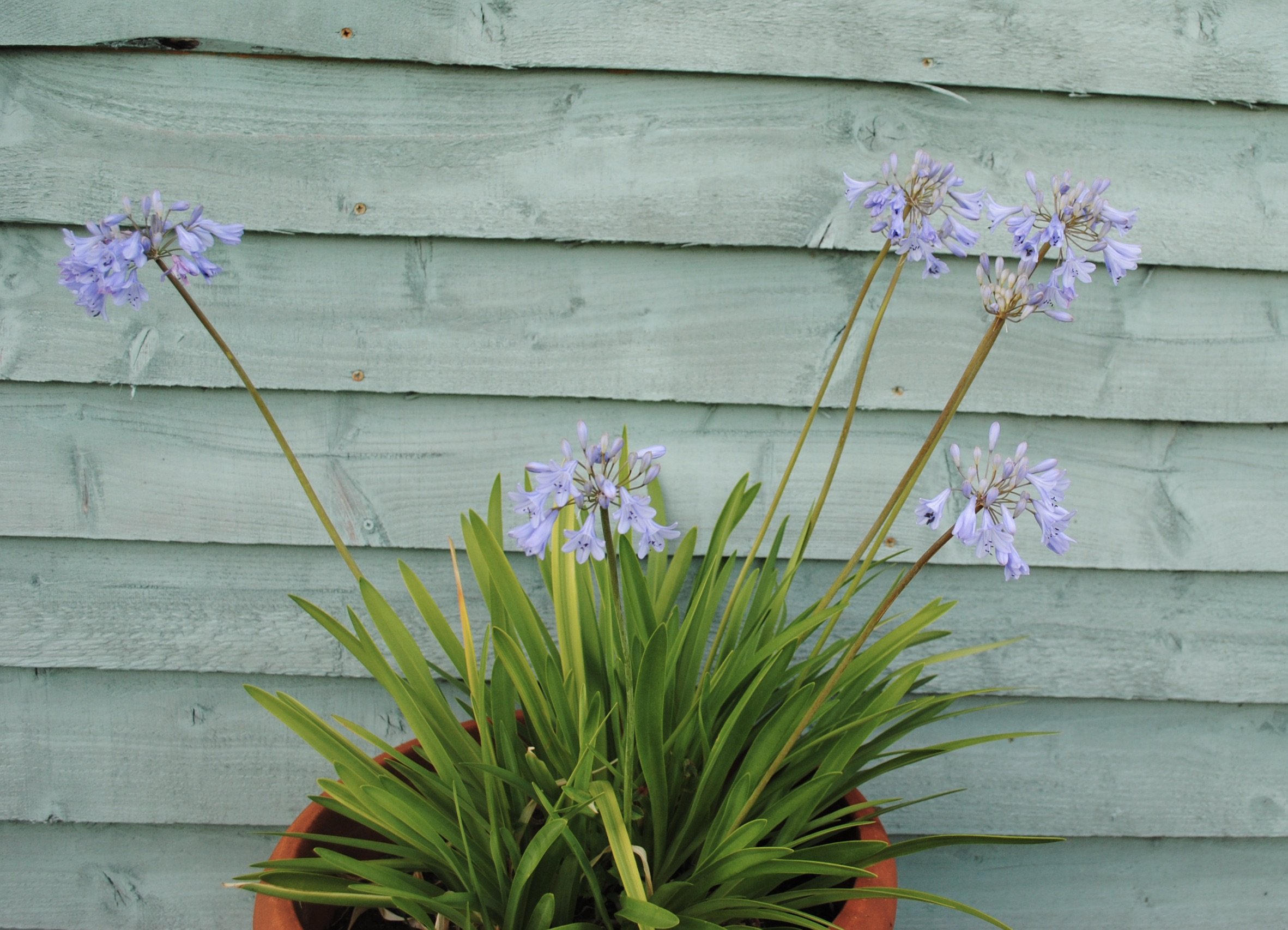 The sweet peas have nearly reached the top of their support and are probably coming to the end. The stems are getting much shorter but I am still managing to get enough stems daily to fill a couple of bud vases. 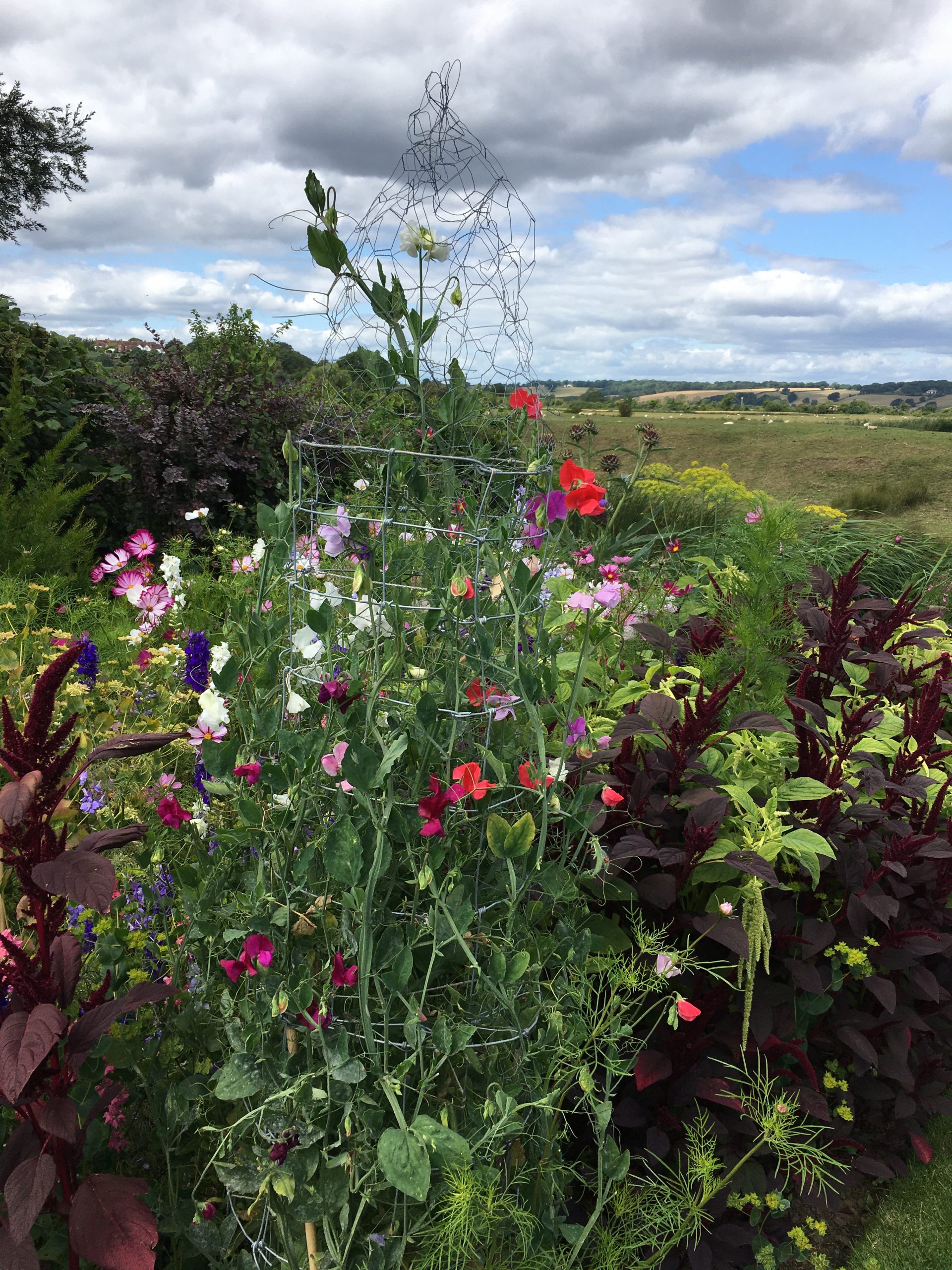 One of the most difficult things to achieve in a garden is continuous colour and interest throughout the seasons. We certainly struggle with this. Whilst as previously mention when first designing the garden we planted many shrubs both evergreen and deciduous along with perennials and each year we add annuals there are always some periods where gaps appear. This is particularly once the lupins and delphiniums have gone over. One way to help rectify this is to visit other gardens to see what they have in flower so this week we did just that and re visited Great Dixter which is not far from us. 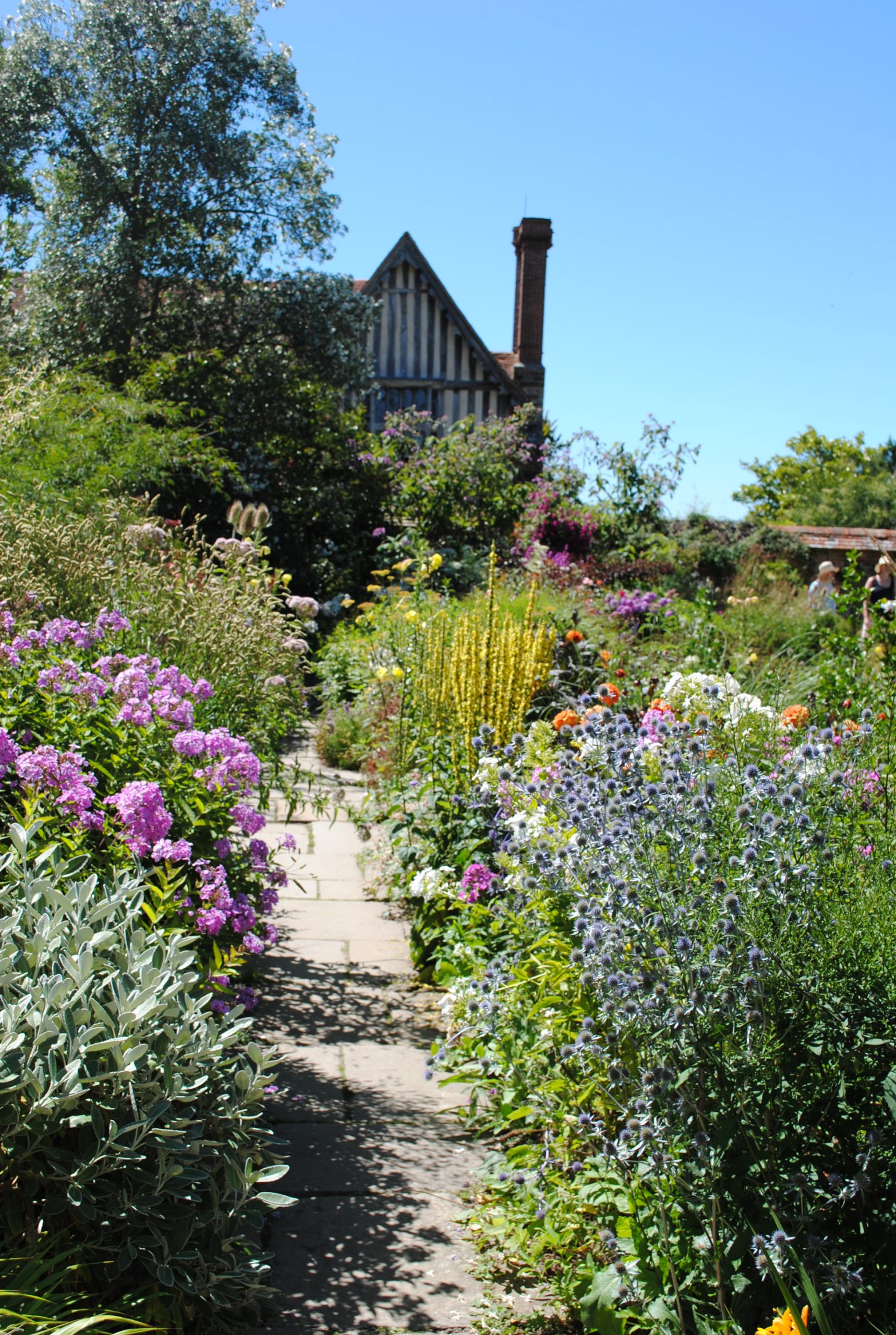 It certainly provided the answers, I had been thinking of adding more phlox next year after reading an article by Sarah Raven who recommended the very same for its longevity of flowering. And there was an abundance of phlox in various colours. I also liked the wild celery, see below as well as the Eupatorium and Thalictrum or meadow rue. It was well worth the visit as I also purchased a lovely pale pink astilbe and lysimachia clethroides which I have been after for ages! 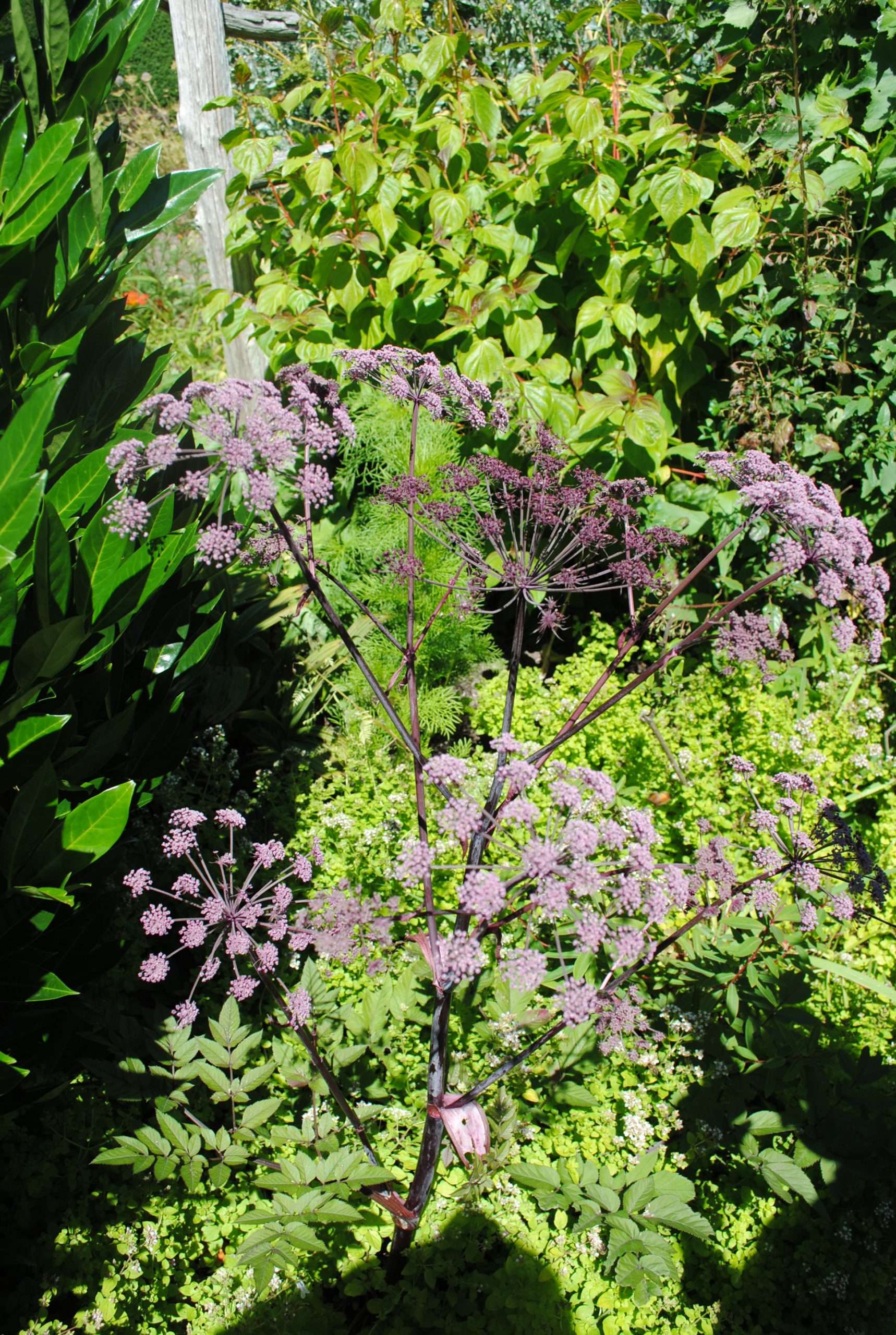 The other way of filling gaps is by placing pots in them planted with lovely blooms but pots need a lot of watering so succession planting is better.

July, along with October tends to be the month we cut the boundary hedges. And I do mean we, hubby cuts and I collect the debris. We are always mindful of nesting birds hence leaving it until July. You cannot really see them hidden behind the boarders but they do look neat and tidy. 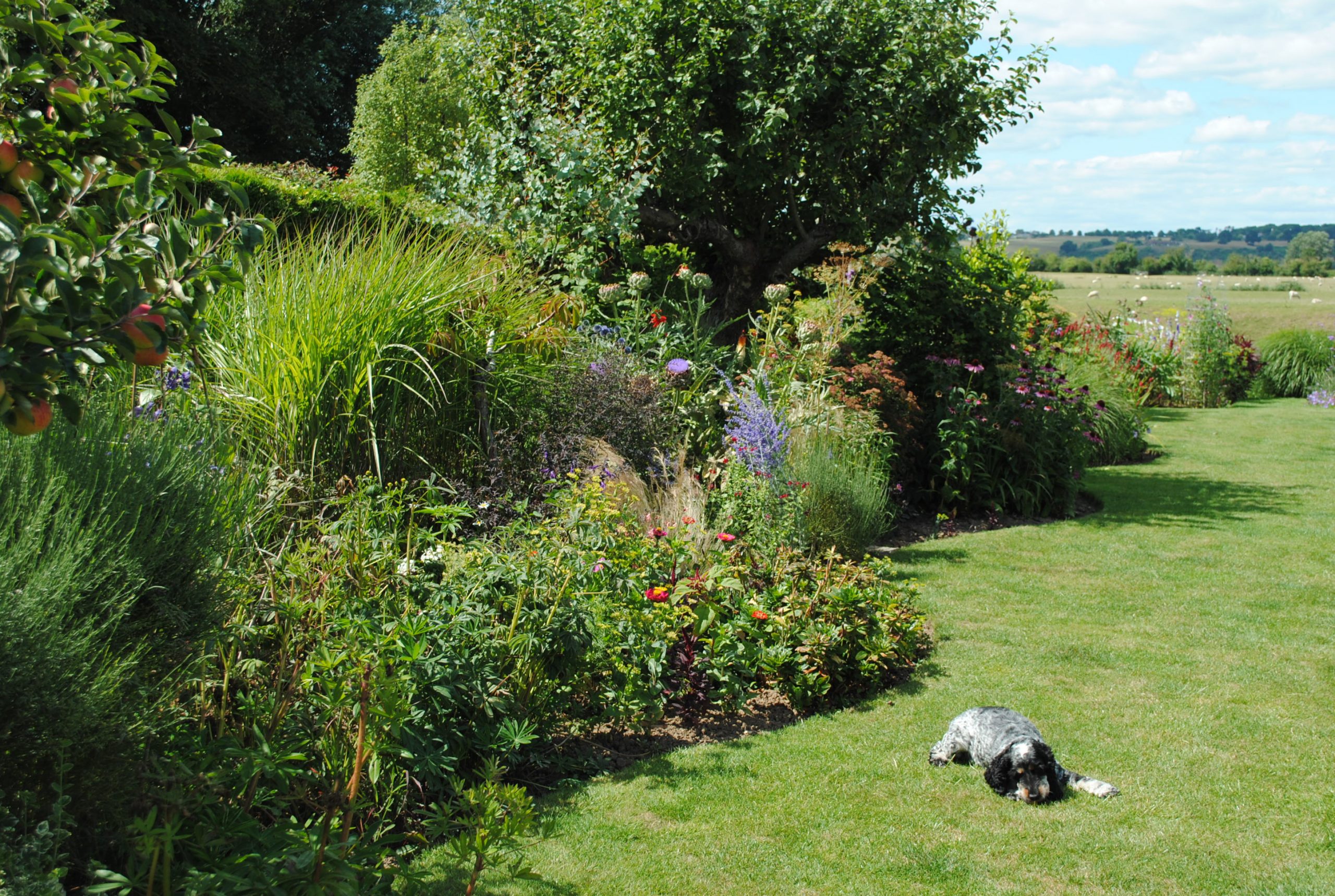 The above photo was taken on the 28th July and we ended the month with soaring temperatures, along with most of the country we had over 30 degrees but at least we had our trusty breeze.

And as with all posts, I end with a garden bunch. This month we have cosmos, larkspur, amaranthus, crocosmia, lavender, mint, rosemary, bupleurum and choisya foliage. 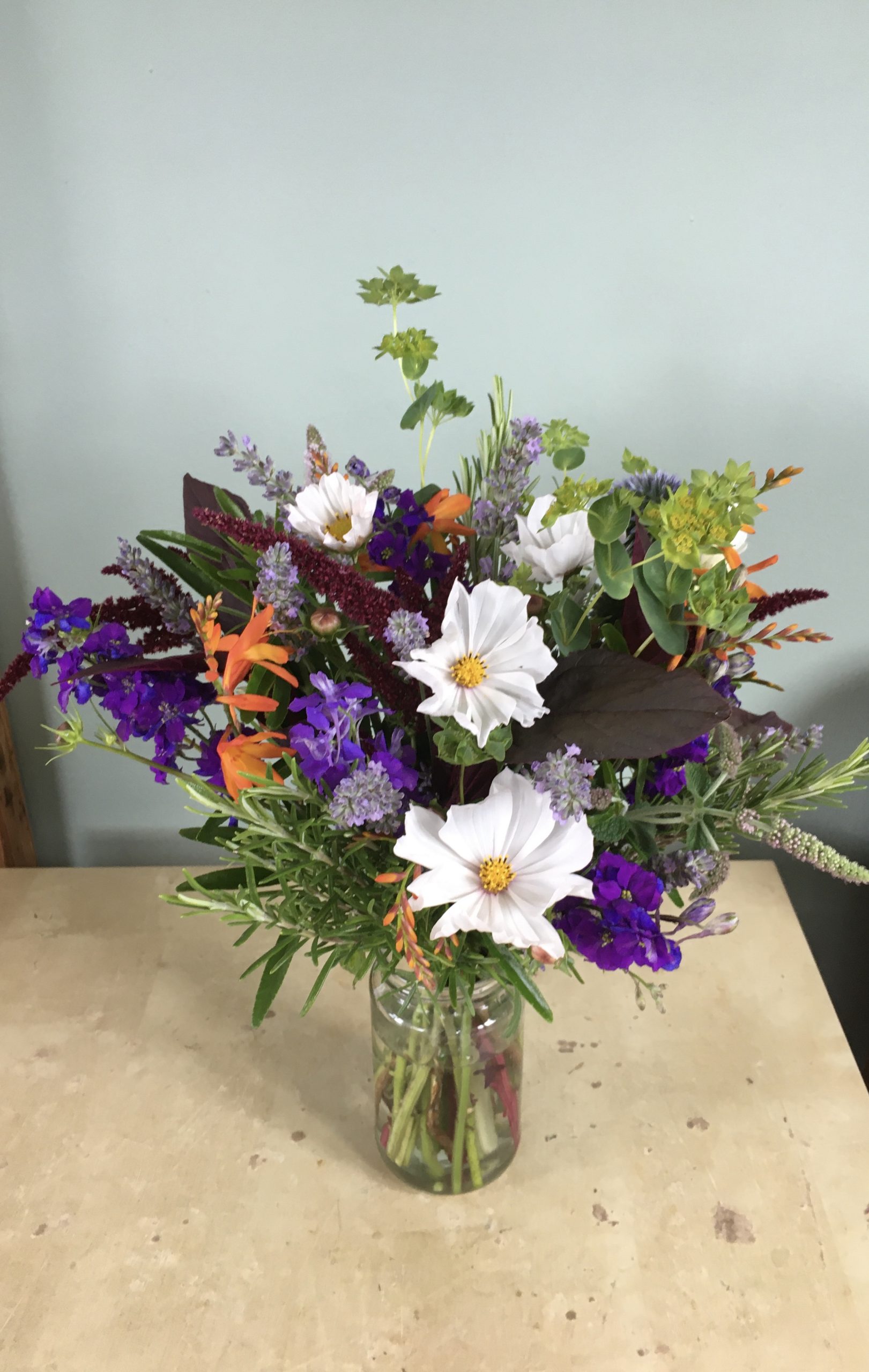 And on to August.